He vowed to keep rocking forever—and that he’d take our parents with him. 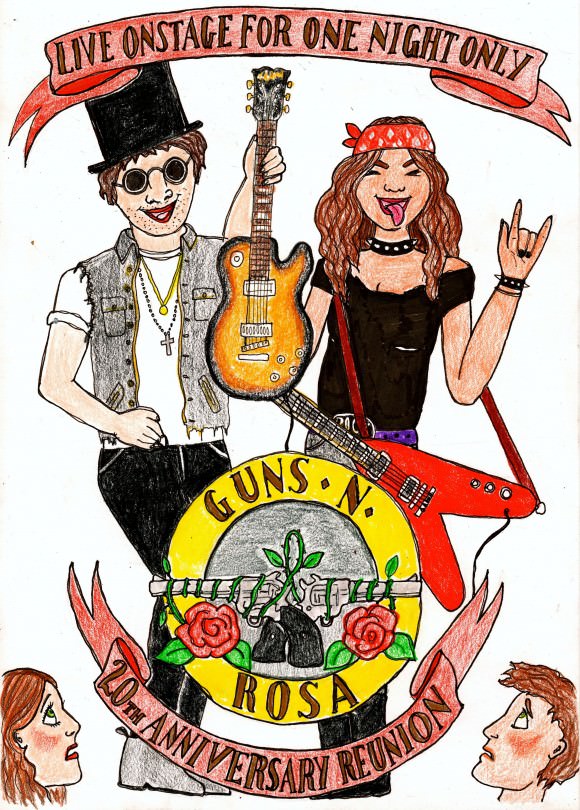 Every summer, my family takes a trip to the shore. We rent a house, usually some cottage with a name like “The Sea Shell” or “Ocean Winds” or something equally creative, for a few weeks. We spend half that time at the beach and the other half lolling about on the living room floor, exhausted by the sun and the sand and an overload of ice cream sundaes. It’s a nice tradition, or at least it used to be, before my twin brother, Will, met his girlfriend, Angela, six months ago and became, like, incapable of having fun without her. We’ve been at this year’s cottage (“Sand Castle”) for five days now, and all he’s done is text Angela, or Instagram pictures of the ocean for Angela, or say things like “Angela loves maple walnut ice cream” before eating his sundae with a giant sigh. I’m ready to throw him off a jetty and into the middle of the sea, but I’m sure he’d just heroically swim back, calling Angela’s name the whole way.

My parents think the whole Angela thing is “cute,” because my parents only see the cutesy stuff, like holding hands and dreamy-eyed texting, and they don’t have to hear the rumors I do about the things my brother and Angela do at various movie theaters, parks, house parties, and, if Noelle Barber is correct, which she usually is, the bathroom of a T.G.I. Fridays. I’ve spent the past six months with my fingers figuratively (and sometimes literally) in my ears, avoiding the stories and Will himself, partially because it feels like I’m too close to him to know, and partially because it hurts to hear information that makes my brother seem like a stranger. Will and I used to be best friends, and now we’re just two people who share a birthday, a last name, and some DNA. I try to avoid his universe, and if I had anything going on in mine, I’m sure he’d do the same.

“I’m bored,” Will says. We are sitting on the back porch of the Sand Castle, eating Fla-Vor-Ice and waiting for our parents to return from Lazy Larry’s Crab Hut with our takeout dinner. He checks his phone, sighs, and tosses it back on the patio table.

“How tragic.” I have zero Angela tolerance at this point.

“She had to go to the movies with her niece,” he says.

“Whatever.” He picks up his phone again and texts someone about something. He laughs at the response he gets. I don’t even ask what he’s laughing at anymore. I try to concentrate on my Fla-Vor-Ice instead, contemplating whether the lemon-lime flavor is more lemon-y or lime-y. I decide it just tastes like green. Will gets another text.

“You’re supposed to be bored. That’s like, the whole point of vacation,” I tell him. “People pay to come up here and sit and do nothing.”

“Well then, Bails, that means your whole life must be a vacation!” He laughs his dumb laugh and I throw my empty Fla-Vor-Ice wrapper at him.

“Just shut up,” I say, flicking mosquitoes off of my arms. “Your boredom is boring.”

“Your face is boring,” he says, and I can tell he immediately regrets it. We are way past the point of “your face” jokes. I think they died around puberty. He knows how I feel about my face. We may be twins, but he got the good skin. If life were a zit commercial, I’d be the before and Will would be the after. I let the joke hit the floor and stop talking altogether, closing my eyes and pulling my sun hat down over my forehead, where a cluster of sunscreen-fueled bumps has started to form.

I stay silent and pretend I’ve fallen asleep. The only thing I hate more than insults are apologies. For some reason they make me feel smaller.

We sit in silence for a good five minutes until the awkwardness is broken by a loud, terrifyingly familiar sound: electric guitars blaring out of a crappy sound system, combined with the squeal of tires and the rev of an engine on the brink of destruction. The sound moves closer, and closer, and finally we hear a car pull in to our driveway, a door slam, and a grizzled voice yelling, “Hellooooooooo Fisherrrrrrs!”

I open my eyes and Will shoots me a look of terror.

Uncle Crusty isn’t related to us in any way, at least not blood-wise. He’s an uncle-by-friendship, one of those dudes who get honorary relative status because he’s such a major part of your parents’ lives, or at least was at one time, and no matter how many years go by, he’s still considered part of the family. Will and I aren’t exactly thrilled about Uncle Crusty’s presence in our lives, which has been fleeting but memorable. Every time he stops by—usually once every five years or so—something insane happens.

Like, OK: He showed up for our fifth grade graduation in a purple tuxedo he’d rented from a costume shop, and spent half the ceremony playing air guitar in the aisles. Our principal, Mrs. Shirley, had to politely ask him to sit down and behave himself, which he responded to by leading the crowd in a chant of “Mrs. Shirley Rules! Mrs. Shirley Rules!” until she was so charmed by the display that she started playing air guitar herself. My parents then stood up and started dancing. Everyone in our grade thought it was hilarious. Will and I wanted to die.