The wholly impractical action poses that always find their way into the middle of a chase scene or a film’s fiery, final showdown are always the best parts of any movie based on a comic book. You know, like when the hero leaps from some 50-foot tenement building and lands gallantly on bended knee, like he’s about to propose. Or when, to signify their readiness to fight, a group of action heroes suddenly fall into formation and adopt positions heretofore seen only in Janet Jackson videos? These poses are always ridiculous yet inspiring, and I often find myself tearing up when I see them—how can one human being kneel with such power, such purpose? While we’ll never actually be web-slinging, mind-reading, flying-all-over-the-place superheroes, we can replicate and hopefully be empowered by some of the more popular poses practiced by the mutant/caped-crusader set. Next time someone steps to you, or if you just want to psyche yourself up before doing the dishes, strike one of these poses and everything will be OK. 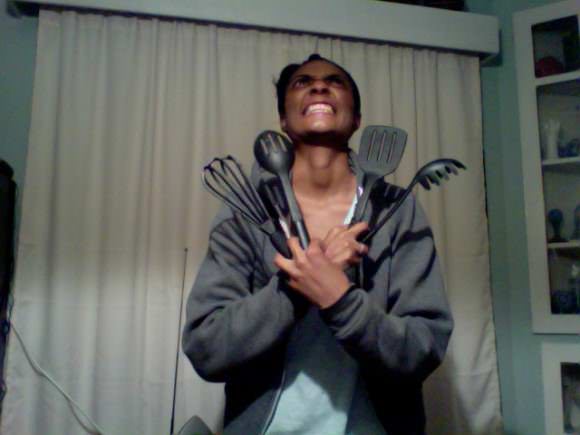 It may look like this pose is all about my love of kitchenware, but it’s actually modeled after Wolverine—brooding, reluctant superhero with retractable adamantine claws. The mechanics are quite simple: clenched fists crossed in front of your body, gritted teeth, flexed arms. The accessories here add even more drama—it looks like you’re struggling internally to deal with the new shapes your hands have taken on. This pose is all about mental anguish—in order to convey all that depth and complexity of emotion, you’re going to have to summon genuine rage and frustration. In this photo, I’m thinking about my ambivalent, confusing relationship with Pretty Little Liars. 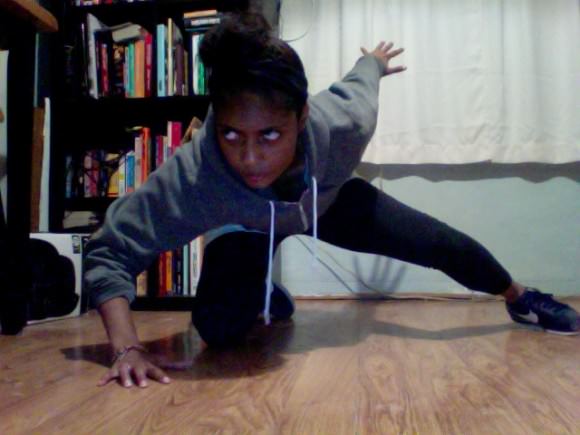 If you’re anything like me, you get off on having a really low center of gravity and you spend most Saturday nights at home crouching—in front of the refrigerator, by the front door, even by the couch. But maybe your crouch doesn’t have as much pizzazz as you’d like—it’s pedestrian, it’s weak, and no one takes it seriously. Thankfully, you can turn things around with a few tweaks.

Step one: Drop down to one knee while stretching your other leg out to the side. You’ll look kinda like you are trying but failing to do the splits.

Step two: Place one hand down on the ground in front of you. Then—and this is where things get tricky—extend your other arm straight behind your back. Pro tip: Try not to let your arm become dislocated from its socket.

Step three: Your face should convey a sense of urgency and dismay, like you’ve just spotted someone off in the distance eating your last stick of gum.

You mostly see this pose utilized in fight scenes, when the protagonist has just kicked some dude in the face and is preparing to leap into the air and do it again. If you want to incorporate it into your everyday life, the best time for it is right after you’ve slipped, tripped, or face-planted and you’re more embarrassed than you are hurt. After the fall, somersault into this tactical crouch. It’ll tell anyone who might have witnessed your blunder, “I’m not clumsy. I was just securing the perimeter.” You’ve just turned a potentially mortifying moment into the stuff of legend.

3. Mistress of the Elements 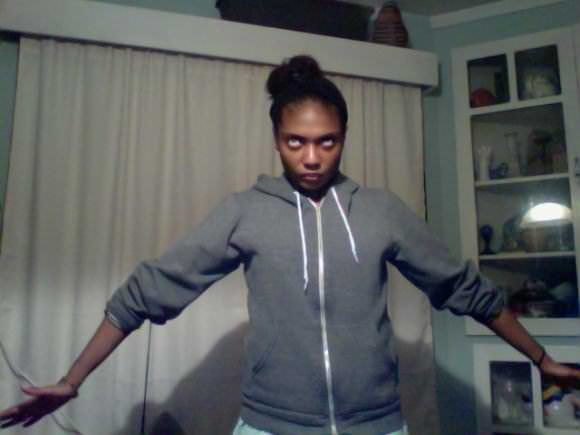 This one is directly tied to Storm from the X-Men. If you decide to give it a go, picture yourself controlling the weather like she does. The pose is regal, authoritative, and frightening—you’re exuding some “I am Aunt Nature, Mother Nature’s younger, edgier sister” vibes.

Step one: Raise your at your sides like you’re about to take flight.

Step two: Tilt your chin down and roll your eyes back, making sure that as much of the white part of the eyeball is showing as possible.

Step three: Hold your breath. This will create the necessary subtle facial tension.

Step four: Now breathe, and live to pose another day.

As far as practical usage, if you ever decide to get married, you could walk down the aisle like this to create maximum drama in a usually boring event.

4. This Is Totally How to Use a Bow and Arrow 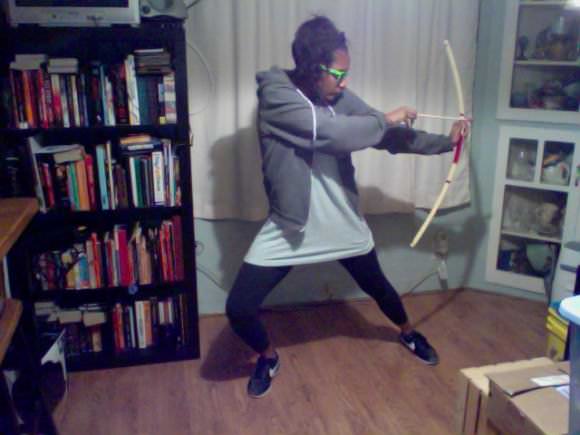 If you’ve ever seen an archery event in the Olympics or even just watched The Hunger Games or Brave, then you know that most archers stand up straight with their feet shoulder-width apart when they’re shooting. Well, forget that mess, because this pose that I’m doing is the perfect example of how you really hold a bow and arrow (or at least how you hold one if you want to look incredible).

Step one: Get a bow and arrow. What, you don’t have one handy? You could always do a little pantomime. Now that I think of it, pretending to shoot a bow and arrow would probably be way more menacing and therefore more effective.

Step two: Put on your “I’m about to do some archery” sunglasses.

Step three: Do a deep lunge while aiming your bow. The disconnect in the action between your upper and lower body is meant to signify that you are a multitasker—look, you’re working your quads and your arm muscles at the same time! Who has time to go the gym after shooting arrows all day? The answer is no one. 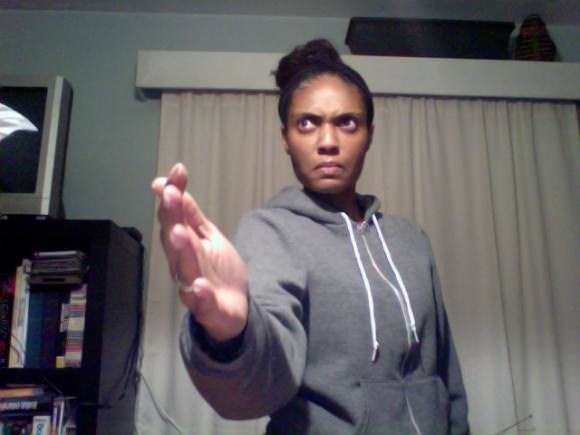 Step one: To get into the appropriate headspace for this pose, you might want to imagine something that is beautiful and graceful, but also deadly. Like a lion bounding across the Serengeti, for instance, or a ballerina holding a rocket launcher.

Step two: Extend one arm in front of you like you’re about to shake someone’s hand, but keep your fingers loose.

Step three: Scowl. The easiest way to master the stance is to envision yourself singing “And I Am Telling You I’m Not Going” from the Dreamgirls (particularly the “You’re gonna love meeeeee” part). If you do this, your body will just naturally slip into this pose.

Once you’ve mastered all of these poses, practice them in front of a mirror frequently as a kind of personal affirmation that you are pretty awesome. Try to strike one of them while you’re casually talking to someone—you will win that conversation. Just remember that with great power comes great responsibility. ♦