As a light-skinned biracial teenager growing up in Canada, I didn’t know how to answer that question.

Big Girl in a Pretty Dress 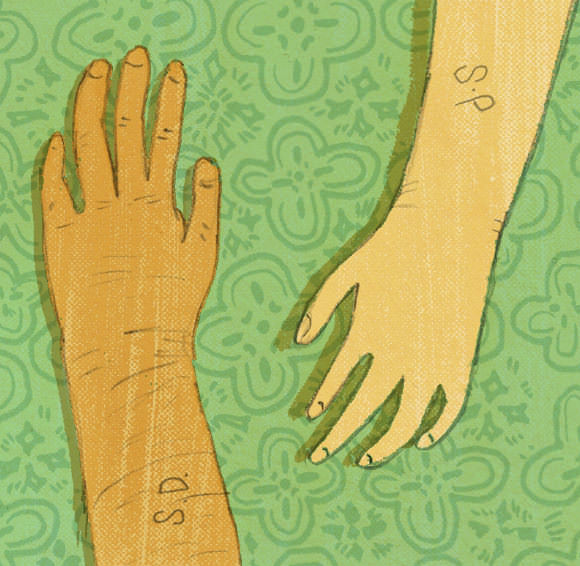 As with any of my Poppy’s stories, I had to press him to learn the details behind his tattoos. They were easy to miss, a muddled s.d. on his left forearm and an even shakier s.p. on his right, in faded ink that barely stood out against his weathered skin.

“They are my initials” was his answer the first time I asked him about them, when I was about eight.

Oh, I thought. That seemed simple enough. But instead it brought on a whole new wave of questions. I knew my grandfather’s “real” name was Satya Pal (though almost everybody I knew, including my grandmother, called him “Peter”). But that didn’t explain how the D came in. I pressed further.

“Satya Dev was the name I was born with,” he said. “When I was a boy—eight or nine—a man with a business on the side of the road asked if I wanted to get my initials tattooed, and I thought, Why not? Not long after, my father changed my name to Satya Pal.” He went and got those letters tattooed as well.

With each explanation came more questions. How did his father change his name? Was there a ceremony? A ritual? Did he tell him why he changed it?

“No. He just started calling me Satya Pal one day.”

How did he know his father was even addressing him?

“When my father spoke to you, you knew. When he learned about my tattoos, he walloped me upside the head.”

My Poppy’s stories made the India he grew up in seem like a fairy tale, a place where a boy wandering the streets could get a tattoo from a stranger and where first names can change without a moment’s notice. I’ve always been obsessed with recording and archiving everything that happens to me (I have filled scores of diaries, scrapbooks, and blogs), and somewhere in the back of my mind I intended to collect and record all of Poppy’s stories too.

Then, early last month, he died, leaving so many stories unrecorded, so many questions still unanswered (How much time passed between the two tattoos? Was it the same man who did it both times?). I had all these half-stories, none of them written down, and now I’d never be able to fill in the blanks.

My mother—Poppy’s daughter—didn’t even know the story behind his tattoos until I asked him in front of her. Unlike me, he didn’t dwell in the past. He rarely kept photos or mementos, and he spoke about his life only when provoked. Most people who knew him knew only the most basic details of his life: He left India in his 20s to work in England as a marine engineer, and met my Nana in a small English town. They moved to Calcutta, where my mom and her brothers were born, then emigrated to Canada, where I was born and have lived my entire life, a few years later.

Compared with my Poppy’s childhood, mine was pretty dull. I grew up in a fairly multicultural neighborhood where having parents from a different place wasn’t that big a deal. Sundays we would go to my grandparents’ house and eat tandoori chicken and dal. There’d usually be an Indian movie playing on TV, but the only person watching would be my English grandmother. My mom took me to a Hindu temple once when I was very young, I suppose as a way to connect me to my culture. The priest gave us fruit blessed by the gods. I was trying to learn to juggle at the time, and I thought this would be a good opportunity to blow everybody’s minds. Instead, I just dropped my oranges in front of Ganesh. My mom was not impressed.

Physically, I don’t look very Indian. My skin is light, with yellowish undertones. I have dark, bushy hair and eyebrows, and muddled blue eyes. From middle school on, curious classmates would ask, “So, what are you?”—the question that every mixed-race person is all too familiar with. I had a hard time answering. To call myself “brown” felt like a farce. I was born and raised in Canada. My dad is white, and my mother is from India but has completely assimilated into Western culture. Claiming brownness felt like inserting myself into a culture that wasn’t my own—and this was long before I knew what the word appropriation meant. Calling myself “white” felt equally wrong, like dipping a paintbrush into a pot of white paint and streaking it over our family portrait until it erased my Poppy’s stories, my mom’s childhood, and the family members lost during the violent partition of India in 1947, creating a blank slate onto which could be projected a picture of quintessential Caucasian girlhood.

So I usually answered “What are you?” with the simple, safe, monosyllabic “Mixed.” It was noncommittal enough that I could acknowledge the privileges that came with having light skin without whitewashing my past.

As I got older, I started to read more about identity politics and became protective of—and sometimes defensive about—my Indian background. With a name like Fitzpatrick, I never had to explain to anybody that I had some Irish ancestors, despite the fact that the last one came three generations before me. It could be taken for granted that, as a light-skinned, English-speaking person living in Canada, I must have some European blood. But I felt like I had to almost prove my Indianness. “You don’t look Indian,” said one girl in my eighth grade social studies class when I was working on a family-tree project, as if I was trying to dupe the class. At other times it was treated like a novelty, a conversation starter at parties: “That’s so cool that you have something interesting in your history.”