We weren’t looking for each other.

Empty With You Gone 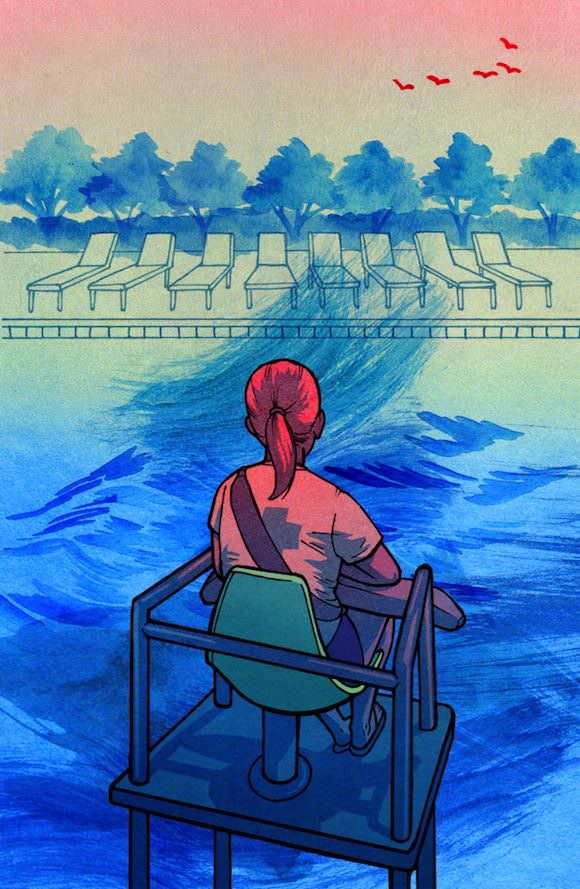 The pool officially opens at 9:30 AM, but Miller and I are always here by 8:15 to perform the most glamorous part of the job: checking the filters for dead mice and skimming a delightful mixture of leaves, twigs, and yesterday’s hairballs from the top of the water. We work in tired silence to the sound of bubbles interrupting our yawns. This is only our first summer as lifeguards at Holiday Grove, but after a solid month on the job, we have the routine down to a boring, yet comforting, science.

“It’s supposed to be like 85 today,” I say. I whip a skimmer full of detritus over the pool fence. Miller puts the filter cap back on (no dead mice) and looks up at the cloudy July sky. “Yeah. I heard this is all supposed to burn off before noon.”

Lifeguards are always ready to discuss the possibility of the clouds burning off. It’s a mix of meteorological obsession and an instinctual need to wish summer into being. We sit in our high, all-seeing chairs for hours, and hopeful people wrapped in towels under gray skies turn to us for confirmation that the sun will, indeed, shine again. At times it feels as though they think we have some special power that goes beyond our six-week certification sessions with the Red Cross.

We finish our prep work and head down to the canteen for Red Bull and chocolate chip cookies, the breakfast of potential heroes everywhere.

“Here’s to guarding lives,” Miller says, his head down on the table, the remnants of last night’s party pulsing through his brain.

“Good morning, guards!” It’s Mrs. Harrison, the owner of Holiday Grove. Miller snaps his head up from the table.

“Good morning, Mrs. Harrison,” we reply in unison, like kindergartners reciting the Pledge of Allegiance.

I will never, ever call her June. My parents are very big on honorifics, and even though I’m almost 18 and technically an adult myself, I can’t bring myself to call anyone my parents’ age by their first names.

“Lookin’ good, June,” Miller says. “Gonna burn off and be a beauty.”

As soon as she leaves the room, Miller puts his head back on the table. “Wake me up if she comes back,” he says. And so begins yet another day of vigilance.

By 11, the clouds have dissipated. The air is thick with sweat, chlorine, and coconut oil. Miller and I sit on opposite ends of the pool, four eyes scanning the water for any souls in need of saving. There are swirls of sunscreen floating atop the water, tiny oil spills in an artificial ocean, and the crowd pushes right through them, splashing, kicking, and screaming under the sun.

I keep my focus on the water, moving from swimmer to swimmer, looking for signs of distress or bad behavior, but it’s a pretty typical morning: nveterate rule-breakers running on the patio and jumping in the shallow end, shouts of “Marco!” echoed by shouts of “Polo!” There are a few girls my age that I recognize from summers past, when we all attended Holiday Grove Camp together, but they don’t seem to recognize me. They spend most of their time laying out on the chaise lounges, sipping lemonade, tilting their heads back to catch the sun, and yelling at the middle-schoolers for splashing too close to their chairs.

“My phone is, like, right here,” says one of them—Alexis.

“Like I care,” the kid shoots back, doing a handstand and letting his legs collapse hard on the pool’s surface.

Alexis gets up, pushes her hair behind her ears, and walks right past my chair toward the other side of the pool, where Miller is stationed.

“Hey,” she says sweetly. “Do you think you could ask those kids not to splash near me?”

I try to keep my eyes on the water, because I know where Miller’s eyes are, and one of us has to pay attention. I hear him laugh and mutter something, and Alexis laughs as well, and then Miller’s whistle blows.

“No splashing in the pool,” he says to the middle-school crew.

“It’s a pool,” one of the kids yells back. “Tell your girlfriend to go home if she’s afraid of the water.”

“She’s not his girlfriend,” I say to the kid, regretting the words the second they leave my mouth. I try to cover. “You can splash. Just be courteous.”

They decide this is fair and take the splash battle to the center of the pool.

“Thanks,” Alexis says sarcastically, returning to her seat. Her friend (Katrina, I think) exhales loudly, and I know it’s directed at me. But I don’t look at her. Or Alexis. Or Miller. I keep my eyes, as always, on the water.

At 12:15, Miller blows his whistle and yells, “Adult swim! All kids out of the pool!” The kids boo. Miller bows. Alexis and Katrina wrap sarongs around their waists and head down to the canteen.

“Do you want anything, Mills?” Katrina asks.

They don’t ask me anything.

“For saying she’s not my girlfriend,” he says. “Even though she’s trying pretty friggin’ hard.”

I suddenly feel sorry for Alexis, even though she’s kind of the worst. I have a memory of our camp sleepover in fourth grade, when she had to be picked up by her parents because she was too scared to sleep in the woods overnight. It makes it impossible for me to hate her.

“Here comes the lady of the hour,” Miller shouts. There’s only one adult who ever uses adult-swim time. Mrs. Farrell, who is approximately 80 years old and insists upon using her full 10 minutes for laps. I swear I’ve seen her smirk at the kids waiting to get back in the water while doing her backstroke. I kind of love Mrs. Farrell. Sometimes Miller and I will let adult swim last a few extra minutes, because whatever, the lady’s earned it.

Miller grins at me from across the pool. Today is one of those days.

We get one half-hour break at 12:30 PM. “Take this opportunity to go to the bathroom,” I tell the kids as they file out of the pool area. “Remember: We don’t swim in your toilet, so please don’t pee in our pool.” Nobody laughs.

He jumps in the water as soon as the gate is locked, but I can’t seem to pull myself out of my chair. My feet feel melted to the concrete, and for the first time all day I’m concerned about the state of my bikini line. Did I shave it enough? What if I missed a stray hair? What if there’s a razor-burn bump that I didn’t notice? What if it has all grown back since this morning and I stand up and Miller sees it? Does Miller even notice I have a bikini line? Ugh, I hate everything.

I do a quick check and things seem to be in order, but I still can’t seem to get out of my seat. I can’t watch the water, either, because there he is, shirtless and swimming, kicking his legs and doing flip-turns at the wall. I have no idea where to cast my eyes. So I just keep my sunglasses on and pretend to read a half-soaked magazine, flipping the pages to what seems like nothing but shampoo ads.

“Get in here, dummy,” he says after swimming alone for a solid 10 minutes. “It’s like nine million degrees outside.”

I don’t want to get in the water with you because you are all wet and beautiful and I want to kiss you and do unspeakable things and our break is over in like four minutes and it’s probably not work-appropriate.

“Nah, I don’t feel like it.” At least I didn’t say “Can’t—cramps” again, like last time. In the time we’ve worked here, I’ve only swum on break twice: once alone, when Miller decided to go down to the canteen with a bunch of dudes from his school, and once with Miller, on the morning of our second day.