Home Is Where My Heart Is 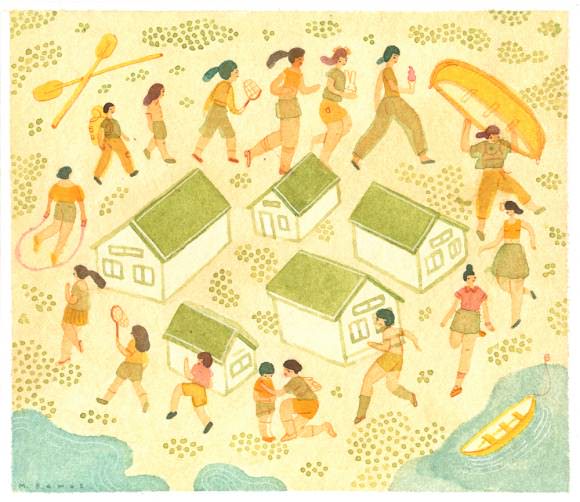 When people ask, “What’s your favorite place in the world?” I have two answers: Disney World and summer camp. I don’t need to explain the first one—it’s the Happiest Place on Earth!™ As for the second, the only people who need an explanation are the unlucky ones who’ve never been to camp. There’s just something about it that defies reason, that transcends geography and bends time. Camp isn’t really a place at all—it’s a feeling, a spirit. No matter where you went to summer camp or when, you know what I’m talking about. You feel it in your heart.

I know that all of you noncampers out there are rolling your eyes right now. When camp people talk about camp, we can sound like cult members. To tell you the truth, we kind of are. We’re crazily devoted to this community that asks us to leave our family, friends, and cell phones behind to hang out in the woods and learn secret chants and rituals and do trust exercises and become One of Them (Us). And all we want is more—eight weeks each summer is never, ever enough. And, just like a cult, it only looks weird from the outside. Once you’re a true camper, it’s the rest of the year that feels wrong.

I won’t attempt to explain the inexplicable, but I can, perhaps, give noncampers a window into the world of camp and show you a bit of what makes it so great. Though to be honest it’s a bit mysterious to us lifers as well.

I’ve spent eight years of my life as a camper and six as a counselor, all at the same place, a Jewish camp in Florida that my mom picked out when I was seven years old. I was a quiet, cautious kid, scared to try new things or to stick my neck out. Then, as now, it was hard for me to outwardly show my emotions. But there was something liberating about camp. None of these people went to my school or knew anything of the social hierarchies there. There was no stress about looking good (there’s really not much you can do about that when you’re playing outside all day in 100-degree weather together). The only thing you’re concerned about at camp is “What fun things are on the schedule today?” You’re not getting graded for anything you do, so you feel free to experiment. In such a creative, stress-free environment, one that is primarily concerned with sun and fun, it’s hard not to fall in love with everyone and everything around you.

On the first day of camp, everyone gets together and introduces themselves, and then we’re off to our first activity. There’s no time to split off into cliques or to cast judgment on anyone—you’re still trying to commit everyone’s names to memory when you suddenly find yourself in the middle of a game of freeze-dance with 20 other kids. At the end of the day you go to your cabin, where you’re squeezed into a room with four to seven other kids—that becomes your friend group, your team, your family. And everyone supports one another, just like family.

The summer between my seventh and eighth grades, the camp took us on an overnight trip to Myrtle Beach. On the way, the bus broke down on the side of the highway for what felt like hours. We sat in the bus waiting, sweaty and miserable—I remember someone got off the bus to throw up. You know how when a bunch of girls live in close quarters for a while, all of their periods sync up? Well, it seemed like everyone on that bus that day had their period. We finally got the bus going again, and then, perhaps caused by a combination of that inevitable menstrual synchrony and some stress-induced hormonal surge, the one girl who hadn’t started menstruating yet…started menstruating. Right there, right then, on this sweaty, miserable bus. We pulled over at the next rest stop, and a few campers and counselors took her into the bathroom and taught her how to use a tampon. That, to me, captures true camp spirit.

At camp, you’re never left to fend for yourself. No matter what’s going on—an acute bout of homesickness, a heartbreak, or just frustration over not being able to make a basket in basketball—your fellow campers and your counselors are always there to offer help, or at least a shoulder to cry on. Camp is about building one another up and creating a community, so no matter how you feel the rest of the year, it’s almost impossible to feel alone and misunderstood at camp. Camp is basically designed to create new shared experiences and to foster bonding, so the friendships you make there feel extra special. I rarely talk to anyone from elementary, middle, or high school, but the camp friends I made during that same period are still some of my favorite people in the world, and I will keep in touch with them for the rest of my life. We still quote inside jokes we came up with when we were 12. There’s just something about camp friends.

Color War, usually held during the last week of camp, is where the entire camp is split into two teams—red and blue at my camp—to compete in a weeklong battle of games, sports, songs, cheers, and other displays of “spirit.” At home I was never really into sports or competition, but Color War brings out the fighting spirit in everyone. When that week came around, I made it my personal mission to lose my voice cheering, “B-L-U-E, THAT SPELLS VICTORY!” I’d walk down the halls with my team, ready to demolish our opponents in kickball, screaming, “HOW DO YOU LIKE YOUR CARROTS? RAW, RAW, RAW! HOW DO YOU LIKE YOUR COLESLAW? SLAW, SLAW, SLAW! HOW DO YOU LIKE YOUR SWEETHEART? SWEET, SWEET, SWEET! AND HOW DO YOU LIKE THE RED TEAM? BEAT, BEAT, BEAT!” We weren’t allowed to wear face paint, but I took out every blue item I had in my closet and laid them all out to be sure I had enough to last five days: headbands, knee socks, shoelaces-turned-bracelets—you name it, I piled it on in the 100-degree heat.

Suddenly, every single activity felt like it would make or break the entire contest. Did your side lose a game? Make sure you cheer, “Two, four, six, eight, who do we appreciated? RED! RED! GOOOOOO, RED!” to gain extra points for sportsmanship. Are you sitting in the corner while everyone else is playing soccer? You’re getting precious participation points docked from your entire team’s score. My favorite part of Color War was learning our team song and cheer (always in secret so the other team couldn’t steal our lyrics), which we would perform in front of the entire camp at closing ceremonies. We’d sit on opposite sides of the gym, seas of red and blue, everyone completely exhausted but still energized and ready to give their all to the judges. You got points for being respectful, so the gym was usually silent but buzzing with nervous energy between performances. It was always a blast to end the week singing my heart out (“Blue pride / Lives on in tiiiime / Forever / We’ve played / These games / With all our heaaarts”) and showcasing what teamwork can accomplish through songs, cheers, and skits. The announcement of the winning team is high drama—there are always tears. Color War took all the emotions and energy of the whole summer, condensed them into a few days, and then amplified them to an insane degree. I lived for Color War.