You Me & Us talks about hating high school and premieres their new EP. 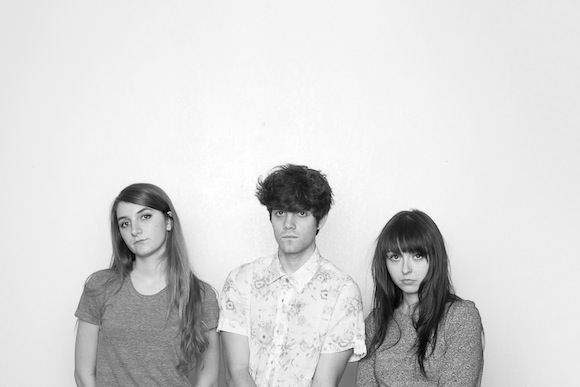 High school sweethearts Carlee Hendrix and Ignacio Caniza recruited bassist Alyssa Midcalf to round out their noise-pop outfit, You Me & Us. The band recently fulfilled one of their dreams—playing the Coachella music festival in their hometown of Palm Springs—and are happy to share their new EP, Stay Inside, with us.

I spoke to them about relationships, nostalgia and where to find the best pizza.— Bianca

BIANCA: You guys met in high school–what was it like for you?

IGNACIO: Pretty average. I focused on my art classes, mostly, did horribly in math, and constantly drew pictures of my teachers. When I was a freshman, I used to wear a lot of girls’ clothes and paint my own shirts.

CARLEE: I really disliked high school. I was homeschooled in middle school, so when I started going to public school I felt out of place. I did half of my classes as independent study, so I got to sleep in until third period and leave school early every day. That was nice.

How did you become friends?

IGNACIO: I saw Carlee in the hallway at school one day and thought she looked so cool that I had to talk to her. Carlee and I met when she was 13 and I was 15. A lot of our first hangouts were at the park—we would sit on the grass and share our favorite bands with each other, or just walk around and talk about whatever. We started going to shows, too, and that was a lot of fun. I think it’s safe to say we fell in love very early and it hit hard.

What is one of the coolest things you’ve ever done for each other in the name of friendship?

IGNACIO: Always including each other in everything we’ve done creatively, in one way or another. Whether it’s actually contributing or just being supportive and offering constructive criticism or creative input.

CARLEE: Getting to make music and basically road-trip around the country with your best friend is the coolest thing.

CARLEE: I used to do a lot of musical theater when I was younger. I started to get really bored of singing other people’s music; that was when I started writing my own.

IGNACIO: I grew up going to a lot of punk and underground shows. One day at school, some kid had a toy keyboard; I bought it from him and asked my older brother’s friends if I could play with them in their band. I had never touched a keyboard before.

Carlee, you started playing guitar at 12–why did you want to pick it up?

CARLEE: Honestly, I was obsessed with Michelle Branch!

You Me & Us songs lyrically explore themes of nostalgia, adventures, and relationships. What are you guys nostalgic about?

CARLEE: There are definitely people and moments in time that I get nostalgic over, like summers when I was younger, old friends, or being 16 and driving with my friends to the beach in the middle of the night to watch the sun come up.

Being on tour, you guys eat a lot of pizza. What are your faves?

IGNACIO: There is so much amazing pizza out there. It’s kind of nice because there’s definitely a lot more good pizza than there is bad pizza. One of my favorite places is Pizza Research Institute in Eugene, Oregon; it’s a science-themed pizza place. The “periodic table of toppings” is really cool. Another favorite is Pizza Guru in Santa Barbara, California. This pizza place is sort of themed around enlightenment, and let me tell you, you will find nirvana in this pizza. No joke—there’s a pizza called Nirvana and it’s my favorite.

You Me & Us performed at Coachella this year; what was special about playing at that festival?

CARLEE: Coachella takes place about five minutes from our house, and we’ve all attended (or been too broke to attend) in previous years. It was surreal to play one of the biggest festivals in the world in your hometown, with so many other amazing bands. It’s always been one of my dream scenarios as a musician.

CARLEE: That’s my pup! He used to belong to my older brother, and I adopted him when he was one year old. His name is Nike, which is kind of cool because that is the name of the Greek goddess of victory. He’s our best friend and he’s the most loving dog there is; he’s got a very strong personality and he’s always getting into trouble, but he makes his own rules, and we love that about him. ♦

california music premiere song premiere you me & us