Girls With Power and Mystique: An Interview With Sofia Coppola

The maker of all our most cherished movies talks about longing, identity, and how Hollywood underestimates teenagers. 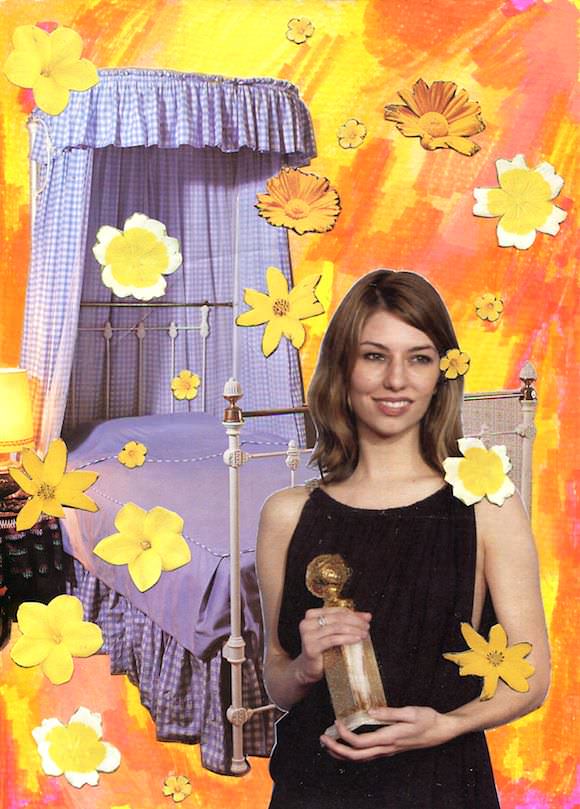 Sofia Coppola has written and directed some of my favorite movies—The Virgin Suicides, Lost in Translation, Marie Antoinette, Somewhere—and has now blessed us with a fifth movie, The Bling Ring. Based on a Vanity Fair article about a pack of L.A. teens who burglarized celebrity homes a few years ago, it avoids feeling preachy in a WHAT’S THE MATTER WITH KIDS TODAY? way, instead getting its point across by leaving you with an unnerving sense of discomfort. The Bling Ring doesn’t try to have its cake and eat it too by excusing pervy shots as commentary (the way I think Spring Breakers did). It’s subtle and clever, and I want see it again and again. Sofia generously spoke to me last week about the film, her moodboards, and this new internet wave of Virgin Suicides love.

Reporter’s note: The phone connection was not great but somehow the zines/jeans confusion worked out.

TAVI: I’ve read some reviews of The Bling Ring that are like IT’S A CRITICISM OF OUR LIVES, but when I interviewed Emma Watson she said she felt it was filmed in a nonjudgmental way, and I kind of felt that way when I saw it, so I would just like to ask you: How did you want your audience to feel?

SOFIA COPPOLA: I saw this culture growing and growing, so I wanted the audience to experience it for themselves, and by the end of [the movie] to think about what’s important to them and how they feel about it—I didn’t want to tell them what to think.

Did you find it hard to do that without glamorizing that culture?

Yeah. I wanted to see it through their point of view, to understand how they got so into it. I wanted, in the beginning, to shoot all of this stuff in a really seductive way and make it look fun—you want to be able to be part of it so you understand where they’re coming from. But then by the end of it, you have a shift and take a step back and, you know, kind of look at it.

A lot of your movies can be kind of critical of these different examples and settings of privilege and glamour and fame, but you kind of have to operate within that realm to make the art you want to make, to make films. How do you reconcile that, and what makes it worth it?

It’s important for me to promote my movies, so I do press that’s about promoting my work—which is really different from promoting oneself. I wouldn’t do press just about myself. The side of our tabloid culture that these kids are into, for a lot of them it’s more about just being famous and being personalities—which is so different from people who are being celebrated for what they’ve accomplished. This idea that anyone and everyone can be famous—it seems like it’s from reality TV and social media. It’s just such a big part of our life now. We didn’t have that when I was growing up.

I read one interview where you said that you felt that there weren’t many movies for teens like The Bling Ring—movies that carefully consider cinematography or have any visual ambitions. Did you feel that was missing when you were a teen? Like, is that something that you noticed and wanted even then?

You know, I loved John Hughes’s movies, and I connected to those movies. But a lot of the movies that were made for teenagers were really, um, dorky and unsophisticated. And I feel like kids are more sophisticated and thoughtful than the [movie] studios give them credit for. I remember them worrying about The Virgin Suicides, like, girls are going to see it and they’ll kill themselves. They didn’t understand that teenagers are…it’s a time when you’re just focused on thinking about things, you’re not distracted by your career, family, you know—it’s a thoughtful time. There’s a tradition that I love, movies like Over the Edge and Foxes—which I was thinking about when I made this movie—that had a real spirit and felt real and authentic to that age. Or Rumble Fish, my dad’s movie that was like a teenage art film. I like that you can make a teen movie that has beautiful photography and try to approach it in an artful way. I feel like that’s not that common.

So many of your movies are about teenagers. What continually draws you to us as subjects?

I always like characters who are in the midst of a transition and trying to find their place in the world and their identity. That is the most heightened when you’re a teenager, but I definitely like it at the different stages of life. I like stories where the drama comes more as an internal part of the character as opposed to from outside forces that make you change. I wasn’t planning to do a movie about teenagers, but when I read the [Bling Ring] story it felt like it had all of the elements of a movie that would be fun and exciting but also disturbing. I was thinking about that part of our culture, which I thought people weren’t really talking about. I thought it was something timely to talk about.

Usually in your films there’s an ingénue who’s just so immediately likable that you just want to watch her, but The Bling Ring is kind of different.

Yeah, I thought, How am I going to make a movie where the characters are so unsympathetic? Usually there’s a girl or a character that I connect with and see part of myself in, and in this one I didn’t. It was really a challenge to find a way to tell the story in a way that would engage you, ’cause if you don’t care about the characters how can you get into it? But then I met [Bling Ring member Nick Prugo], and I thought he was really the most sympathetic one—you could understand how he could have gotten caught up in this group and why he wanted to be a part of it. I remembered being that age and, you know, you do things you wouldn’t do as an adult, because you want the excitement of feeling like you’re part of something.