I spent two years living in bliss. Then I got homesick. 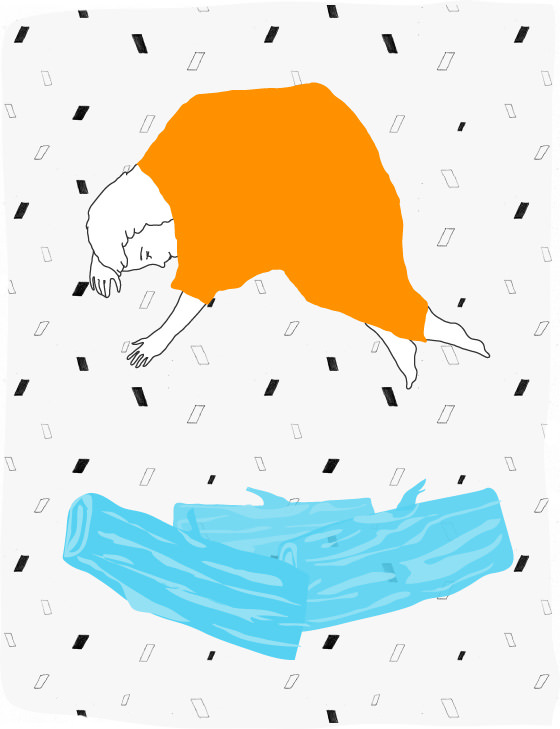 It’s a Sunday in early May when I get Nigh’s text. He’s at a laundromat in Eugene, Oregon, washing my fishnets, the ones with the ripped-out crotch. My tights are making him remember things. My tights are making him lustful and love-full and he eagerly awaits my arrival. (Tuesday after next he is due to pick me up at the Portland airport and drive me back to California for a visit.)

I’d be living in deep denial if I believed that Nigh hadn’t noticed before this moment that his (now ex) girlfriend had, while living with him on a commune in the woods, developed a pee problem. But there are certain experiences that are so yikes—not just gross but a sign of some larger impending doom—that I’ve just got to block them out. The whole thing was such a sad signal that something was really off—as if my body was trying to tell me that it did not want to be there any longer, in the woods, in that relationship. I pushed away memories of that awful UTI as soon as I left the commune; even while I was there, I did my darnedest to flat-­out ignore my body’s messages.

Example: It’s a freezing-cold morning in December. The Spider Dome is still frigid despite the fact that we have filled in the cracks. We have salvaged broken bricks from the burned-­down structure out by the abandoned gypsy camp, and we have picked through mildew-covered clothes from decades’ worth of travelers bringing all their stuff up to this commune and then fleeing. We have shoved the bricks into the space between the floor and the wall. We have stuffed moldy cloth behind rotting planks of wood for insulation. Our room is still cold.

The shitty fire has gone out. It’s morning. Nigh wakes up first. “Anna!” he cries, alarmed. “Anna, ooh Banannarchy, did you pee in the bed?”

Me, straightfaced, lying: “No.”

When Nigh started making a pagan shrine/headboard in the Zen Den and sleeping up there in the attic with 10 or so other stragglers, I told myself and him and anyone else who would listen that it was because he did not love me anymore. Nigh (what a love bug) was too kind to tell me that he did not want to sleep in our bed because I had wet it. I made no attempt to wash the sheets. Sometimes it’s all too much. Sometimes I’ve just got to move on. So I too moved into the attic, and let the event pass over in a pale­-yellow-stained silence.

There are lessons to be learned from this. One: It is lovely to pop a squat in the forest and feel the real fresh air against your real fresh bum, but you better bring a hanky or something to wipe with or you’ll get a urinary tract infection, and if you’re like me, you won’t understand what’s going on with your body and you’ll be too shy to find out. It will get worse. Soon you’ll be traipsing around the woods smelling like the grimier lines of the New York City subway.

Two: Even though I love nature and romanticize nature and tend to blather on about nature all the nonstop time, I was really, really bad at living in nature. (Developing a UTI because I could not properly pee in the woods is just one small example. I have other stories, too many of them, most of which I’ve attempted to shut out from my mind. But they come slinking back: Every time I see an asparagus, I remember the time that I uprooted the asparagus [and rhubarb, and squash, and a bunch of other vegetables whose names I do not know] that this kind old farmer had kept for over 15 years. The faces that he and his wife made when they came home to find that I had razed two thirds of their garden was unforgettable. But I’ll keep trying to forget.) I hate to admit this because lately I’ve been on this kick of transforming myself from city kid to wilderness kid, but I’m finally starting to understand what some people have been warning me of all along: This transformation is impossible. We’re not as free as we’d like to believe. We can’t just radically reinvent ourselves from what we are to what we would rather be. I resist this idea, because my being comfortable in the city isn’t some deep-down-in-my-soul thing but just a result of having been born there and having lived there most of my life, which isn’t some big destiny thing either but just a result of random chance, which is just too random for my taste. But maybe it all has something to do with some larger scheme like reincarnation. Or not. God only knows. The point is: It’s hard to drastically reinvent yourself no matter how much you long to be something else.

Three: It is difficult for me to care about embarrassing myself on the internet. Part of me thinks that I should not publicize the fact that I, a 24­-year­-old woman, spent a good chunk of last winter sprinting out into the snow and frantically trying to pull down my nylons before the pee hit. If I was too ashamed to talk to my “family,” the Rainbow Jihad (what my fellow communitarians used to call our ragtag tribe), about my problem, I definitely should not be sharing this information with strangers on the web. I should care. I don’t care. Internet life does not feel real enough for me to care. Considering how many hours I clock on the internet, this attitude is problematic. What are all those hours, after all, if not time, which is prolly as real as it gets?

The Big Question(s). Do I stay in California and continue to dabble in soul searching and Zen-­ing out and being “free” and connected to the universe and listening to my spirit? Or do I return to New York, which all these hippies have been telling me (and I have been repeating back to them) is a spiritless place that turns your soul sooty, that turns your soul into hard plastic, but which is nevertheless the place where I think my spirit is telling me it wants to be?

Back home? Is that really what my spirit is telling me? What if I misheard? How do I follow my spirit? What am I supposed to do? How am I supposed to
be? (Hey, spirit: Speak louder! Tell me what to do! Why can’t you scream?!)

Also: Am I a bad person for wanting to go back to New York? What if I’m wrong about what I think that I want? Can I ever be as carefree and chill and soul-minded as all those beautiful West Coast hippies?

It is easy to understand why a bunch of kids* would turn from what they called Babylon—big cities and processed foods and power-­hungry thinking and the monotony of day-to-day life—and run off into the forests of Northern California. Much of our time there was spent staring into the sky and saying that this was real, while everybody with their jobs and their made-up faces and sweatshop-labor suits and computer screens were not tuned in to the real. Humans have been running away from society and into nature since the beginning of history. California has been the promised land—land of reinvention and striking out anew—ever since the Gold Rush. So I understand the urge to run and say that this cannot be it. I think that it has something to do with being human. Besides, California is really, really pretty.

* Actually, adults. Nigh is 28, I am 24, and most people at our commune were also in their 20s. But kids is what we called one another. What’s the point of growing up? What’s a number?