Tweets that are happy, free, confused, and oppressed by the patriarchy at the same time. 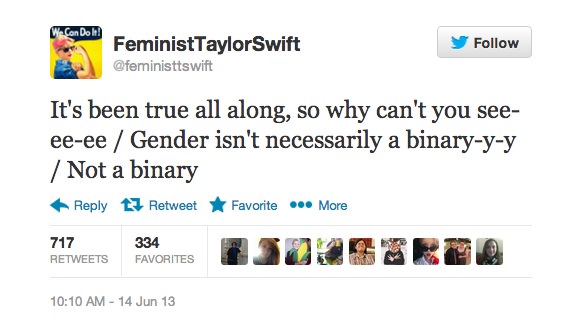 The new, totally unauthorized parody Twitter account Feminist Taylor Swift (which definitely was inspired by Danielle’s hilarious Feminist Ryan Gosling Tumblr) is here to help us feel just a li’l less guilty about singing along to Swift lyrics like, “She’s better known for the things that she does on the mattress,” by topping them off with, “But any man doing the same things would be admired.” There’s nothing like some old-fashioned culture jamming.
Lena 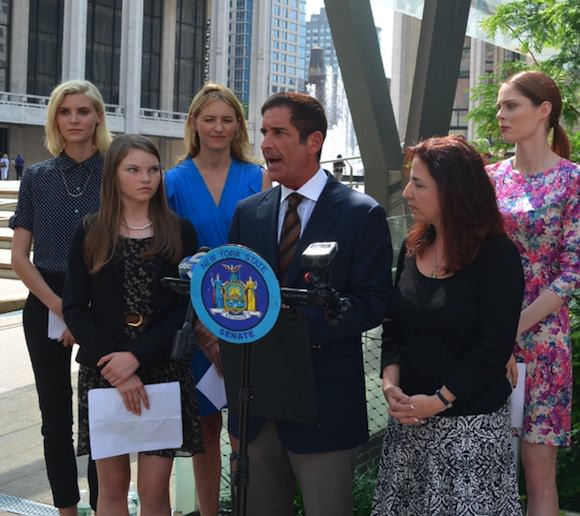 This week, the New York state legislature unanimously passed a law that will give models under 18 the same protections that child actors and other performers already have under child labor laws. Yes! Among other things, it will bar employers from making young models work crazy hours on school nights (as in after midnight or without overnight breaks). The law also will require that any model younger than 16 have a chaperone, that tutors are provided when an underage model misses more than three days of school, and that at least a portion of the money child models earn be set aside for them in protected trusts (where untrustworthy managers and/or guardians can’t get to it). All good news! The only minor bummer is that the fashion press seems to keep implying that this law is a “problem” for the industry, particularly because it will make it harder for designers to hire models who are 15 or 14 for New York Fashion Week (a practice that is not uncommon). What will happen if they have to book—adults? To that, Sara Ziff of the Model Alliance, an advocacy group that pushed for the law, had the smartest reply I’ve read so far: “Designers are marketing their clothes to adults, so I think that would be appropriate.”

At Feministing, Lori Adelman gave props to a group of male student-athletes, from the elite Massachusetts prep school Phillips Andover, who wrote a letter to the editor of their school newspaper that endorsed the campus’s “feminist movement” and took responsibility for having “bonded over actions that marginalized and objectified women.” That particular problem, they also admitted, was theirs to fix: “It is time…to find new, constructive ways to bond and develop team camaraderie—not ones based on conquering dances and competitively targeting females, not by prodding teammates to ‘hook-up’ and teasing those who don’t.”
Tavi 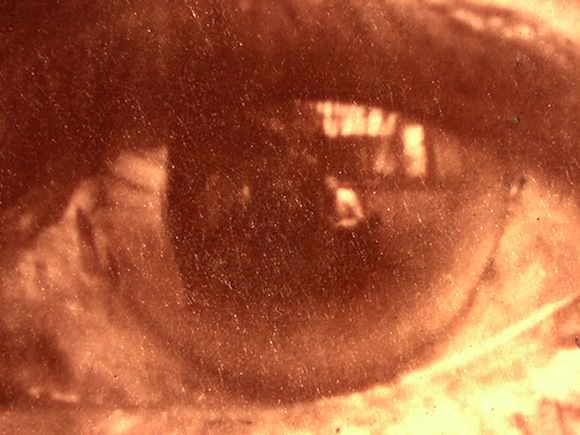 Brainpickings is good every day, so I’ll just offer up three of my favorites from this week: a post on how our vision works, a 1973 interview with Maya Angelou, and some selected poems by Edna St. Vincent Millay that perfectly conjure up summer longing.
Dylan 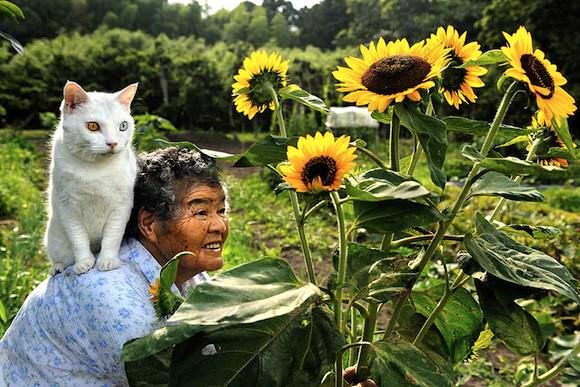 And now, a CATURDAY link: The Japanese photographer Miyoko Ihara took the world’s sweetest series of photographs of her grandmother, Misao, and her grandmother’s very special different-eyed cat friend, Fukumaru. OK, so I know Demilked technically blogged about this a while ago, but the photographs are just so breathtakingly gorgeous I couldn’t not talk about them. To me, they’re snapshots of a fairytale life, the prettiest vision of happiness. I am in love with Misao and Fukumaru. ♦