THE NEW MILEY CYRUS SONG! Plus: A Björk documentary by Björk, lots of Bikini Kill action, and the awesome Issa Rae.

THE NEW MILEY CYRUS SONG! It sounds terrific! Her voice on the chorus is radiant and defiant, singing “We can’t stop! And we won’t stop!” over a buzzy beat by Mike Will Made It, the producer of some of the biggest party anthems of the past two years (Future’s “Turn On the Lights,” Rihanna’s “Pour It Up,” Ciara’s “Body Party,” et cetera). The lyrics set it up like something that could have happened to Miley’s “Party in the USA” character—a homesick girl who just left Nashville to follow her “dream” in Hollywood—a few years after getting full-bore sucked into the Los Angeles underbelly. That includes house parties that end at dawn (“red cups and sweaty bodies everywhere”), adult dancing (“shaking it like we at a strip club”), and drugs (“trying to get a line in the bathroom”).

I like the implication of freedom in the song, like when she sings “only God can judge us,” “we don’t take nothing from nobody,” and “we can kiss who we want” (the last of which seems to be a shoutout to LGBTQ homies). It’s definitely Miley asserting her bad-girlishness and breaking out of the Hannah Montana purity ring. In those ways, it’s really liberating—no woman should be expected by the public (i.e., complete strangers) to be as perfect as Miley was supposed to be. But there’s still a lot to unpack in there, and that’s why I’ve listened to it about 675 times already!
Kendra

While searching for my daily dose of documentaries, I stumbled across this one about Björk by Björk that was originally released in 2003 but uploaded to YouTube earlier this week. Björk is one of my biggest inspirations, and this beautiful little film offers a glimpse into her head. You see her artistic process and how much the natural world has influenced her unearthly music. And after watching it, you might just feel compelled to run away to a surreal forest or iceberg.
Anaheed 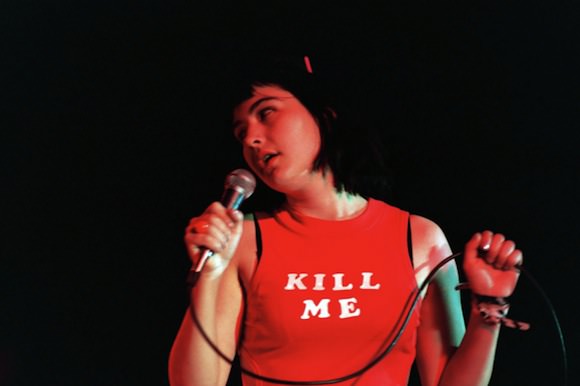 Lots of Bikini Kill action this week! The OG Riot Grrrl band put out a capsule collection with VFiles, and the Feminist Press released The Riot Grrrl Collection, a book that reproduces some of the original zines and posters from the ’80s and ’90s and includes an essay by Le Tigre’s Johanna Fateman. (On June 18 at 7 PM Kathleen Hanna, Johanna, and the book’s editor, Lisa Darms, are doing a reading at the bookstore Bluestockings in NYC. LET’S ALL GO.) Kathleen talked about all this stuff (and gave some preesh to Grimes) on Teen Vogue.

Have you all been watching Awkward Black Girl? So funny, so so good. Amanda de Cadenet posted her interview with its creator, Issa Rae, last Saturday. There’s a point where Issa describes a meeting she had with a “nonblack [TV] executive” who told her that people won’t watch a show about black people unless there’s a celebrity in the lead role. “I don’t think that executives right now, the people in charge, think that people of color—and black people especially—are relatable,” she says, “They’re ‘not mainstream enough’…black turns people off.” So she kept her stuff on the internet and now ABG has more than a million viewers and is being developed into a movie—and Issa’s working on a show for television with the incredible Shonda Rhimes. HA-ha, dumb TV executive(s). Here’s the vid:

My two obsessions are Ancient Egypt and underwater exploration. So when I read about the discovery of the long-lost Egyptian city of Thonis-Heracleion at the bottom of the Mediterranean Sea, at first I wasn’t sure if it was real life or just my fantasy. Well, it’s 100 percent true, and there’s proof: Archaeologists have been documenting their scuba-enabled digs of the site, which has been submerged for more than a thousand years. As if their photos weren’t mindblowing enough on their own, there’s also this video of what it’s like to swim above the sleeping ruins:

This video, which made its way around the internet this week, of a Russian boy in a club dancing like he’s the Great Spirit of Fun Times, raises a few questions: Can children really go to nightclubs in Russia? Did this kid learn how to dance from his parents? Speaking of his parents: WHERE ARE THEY? And finally, why can’t I just be him?

David Bowie and Queen’s “Under Pressure” has been one of my favorite songs since I got Classic Queen for Christmas when I was 12. The very existence of this totally bare-bones a cappella version—the exact OPPOSITE of the completely over-the-top original of “Under Pressure”—is its own kind of gift. It made me cringe a little (like from the first moment they blurt out “Pressure!”) but also get misty eyed (like when David sings backup ahhh ahhhhs to Freddie Mercury’s first big solo). ♦