The wisdom of the boy-band superfan. 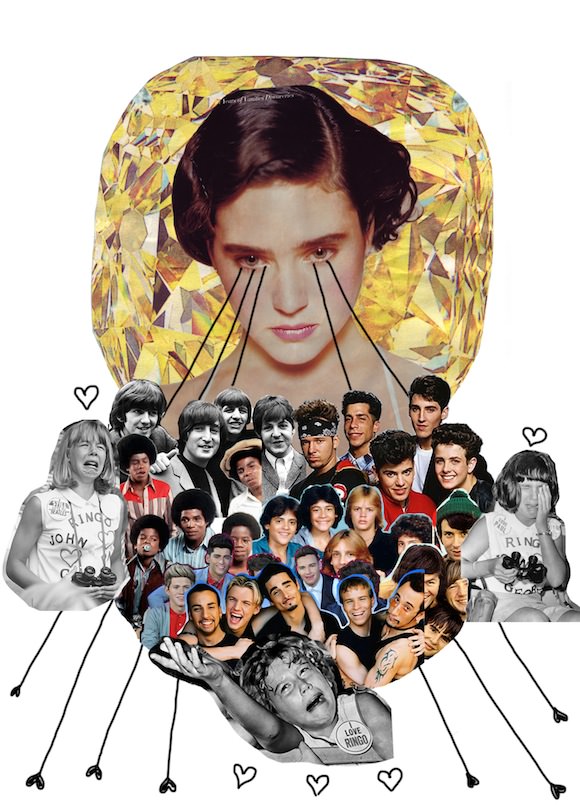 I was 12 the first time I saw New Kids on the Block. It was a Saturday morning, and MTV played the video for their single, “Please Don’t Go Girl,” which depicted the band’s five extra-cute members singing on a warehouse soundstage and running around Coney Island. The song was a sweet ballad begging a girl to never leave (in my innocence I interpreted this as wanting to be her best friend forever), and Joey McIntyre sang the solos in his angelic falsetto. Joey was the group’s youngest member, and therefore closest to my age. I was immediately taken by his piercing blue eyes. Oh, and that VOICE. He and the rest of NKOTB wanted to be best friends with their girlfriends forever! HOW GREAT IS THAT?

It wasn’t long before I bought every single unauthorized band biography available and plastered my bedroom with photos of Joey and, later, of NKOTB’s bad boy Donnie Wahlberg (a hip-hop aficionado whose Public Enemy tees, appreciation of Malcolm X, and lopsided/goateed smile were like tiny flames that ignited my burgeoning hormones). My mom thought I was a maniac, but as a fellow music fan, she let me spend my allowance on all the memorabilia I could afford. (It didn’t hurt that she thought the New Kids were super cute, too.)

Maybe you remember the moment you fell in love with One Direction/the Jonas Brothers/B2K/112/’N Sync/the Backstreet Boys/Take That/Boyz II Men/Hanson/New Edition/LFO/Menudo/the Monkees/the Jackson 5. Maybe it was love at first sight, maybe it wasn’t. But it’s likely that your extremely dedicated fandom—the desire to buy every album and collect every magazine that featured the objects of your devotion—developed over time, like a crush. You scoured websites and magazines to gather every bit of information possible on your fave boy banders—their favorite colors, their religions, what they look for in their dates/mates—and you still linger on EVERY WORD of EVERY QUOTE. People who don’t understand the process of crushing on someone you haven’t met and will never meet might look at this as weird or antisocial, possibly even stalker-ish, behavior. But those of us who have been there know better: It can be a very useful way to figure out how you feel about dating, love, and sex before you’re even want to consider it in real life.

Ever since the Beatles busted through the charts in the early 1960s—and Beatlemaniacs went into full-on frenzied adoration for the mop-headed ones—there has been a pervasive image of boy-band obsessives as screaming, bawling, howling, and otherwise crazed freaks. But the truth is that the tone of mocking condescension that most “civilians” take toward fans of boy bands is completely missing the point. This kind of fandom, especially during your teen years, can be an important part of a person’s sexual revelation and identity-building—two things that also happen to be among the most complex things about growing up.

Our first sexual feelings can be terrifying. (To paraphrase Beyoncé: They are more powerful than our minds can even digest.) It’s one thing for your mom or your health teacher to give you a totally clinical birds-and-the-bees talk, and another thing entirely to actually experience sexual desire and know what to do with it. Attaching your affections to someone like Joey or Donnie or Harry or Zayn or Cody or Siva is a safe way to explore those impulses without having to face them on an IRL person-to-person level before we’re ready.* In that sense, boy-band fandom is, at its core, much more about us than it is about the boys. We are the subjects, and they are the objects in our fantasies, many of which involve our imagined relationships with them. (I, for one, spent hours upon hours planning my future dates with Donnie, picturing myself, wind in my hair, riding in the passenger seat of his SUV—the two of us an early-’90s Bonnie and Clyde.) From a fan’s-length distance, these safely unattainable fantasies can start to teach us about what kind of person we might like to date, and sometimes even how we’d like that person to treat us. The way I felt when I saw that first NKOTB video foreshadowed similar feelings I’d have a few years later about my first love.

As the New Kids got older, so did I (my pubescence dovetailed with Joey McIntyre’s emergence as a fleet-footed, 17-year-old megababe who looked great in a tuxedo with tails). By the time I was 14, I knew that the band was put together by a svengali named Maurice Starr. I also still believed they had real talent and charisma. At the same time, the friends I’d started hanging out with were the “kids on the hill”—the people at my school who dressed in all black, smoked cigarettes, and listened to the Cure. I identified with their semigoth “alternative” subculture, and I truly loved and listened to darker nonpop music, from Joy Division to the aforementioned Public Enemy. But listening to New Kids, which I did on a pretty regular basis, was a connection to all the positive, safe kid-feelings I was afraid to abandon.

I felt like I had to hide my NKOTB love from my cooler acquaintances, and scurried away all evidence when anyone but my closest friends came over to my mom’s house—an effort that came to a dramatic head when I was 15 and the 17-year-old boy I was seeing opened the door to my bedroom and saw that it was plastered with NKOTB photos, up to and including an almost-life-sized cardboard cut-out of the group. His jaw dropped, and he started cackling. I was humiliated.

A common complaint from non-boy-banders about boy bands is that they aren’t “cool” enough. They’re manufactured, their music is canned, they have no talent, and they’re robots; their music is “not serious” compared to whatever “artier” music these critics happen to listen to. (Is it a coincidence that so many things that are widely enjoyed by women and gay men—boy bands, fashion, musical theater—are written off as not “serious?” No, it is not.) But if part of what music is trying to do is communicate, to touch people’s minds and emotions through shared experiences, then how can you argue with millions of fans? There is a persistent and very wrong assumption that music meant for lots of people is naturally terrible music. That’s just exclusion for exclusion’s sake! I have been a music critic for about 150 years (well, 14 anyway) and I can tell you that every single boy band—including New Kids on the Block—has got jams.

That boy I was dating at 15 turned out to be a total jerk—he pressured me for sex way before I was ready to have it, and then dumped me when I wouldn’t. I had heard that’s how dudes could be, so I wasn’t surprised. But it was the day he busted into my room and laughed at my posters that taught me something really important: I figured out that my relationship to boys, whether they were in my life or in world-famous boy bands, did not define my identity, even if—especially if—I was interested in them romantically. Boys’ opinions of what I did, or what I liked, or who I was had no bearing on who I wanted to be. And most important, I wanted—I deserved—a boy who would regard me as highly as the New Kids seemed to value the girls in their songs. No ifs, ands, or buts. After we broke up, I found refuge from this “cool” a-hole in the imaginary arms of NKOTB songs like “Baby, I Believe in You,” which was about trusting your girlfriend wholeheartedly and loving her no matter what.

Over time, I learned that these kinds of fantasies are, at their best, a little schmaltzy and, at their worst, totally gender essentialist. But they helped teach me about respect in relationships. And even if the lyrics of these boy bands’ songs are sometimes questionable—”What Makes You Beautiful,” for instance, is a sort of paen to insecurity—I can attest that it’s still possible to enjoy them as a feminist. Fandom is, after all, about you – what you like, what you identify with, what happens in your imagination. Your fantasy relationship with Harry Styles is something you made up; you have all the control in this relationship. He’s a mirage, a product of your own mind. You can make him whatever you want him to be. ♦

* I am writing this from a straight cis woman’s perspective; but I imagine that boys’ crushes on boy bands, and girl’s crushes on, like, Kristen Stewart, work in a similar way.