The singer & producer talks to us about turning heartbreak into gold (and premieres a song off her new album!). 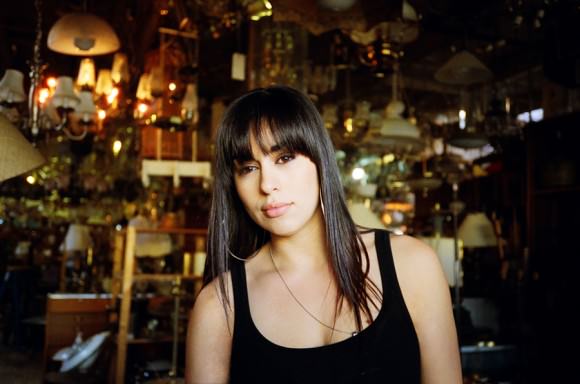 Natasha Kmeto discovered electronic music the traditional way: by listening to an older sibling’s records. She was a bookish teenager in Sacramento raised on her parents’ jazz, funk, and R&B collection; her brother started going to raves in San Francisco and coming home with house, drum ’n’ bass, and trip-hop tracks that she fell in immediate love with. “A lot of people come to that music through partying,” she says, “but I was just the geeky kid in my bedroom, listening to techno too loud in my headphones.”

You can hear all those musical influences today in her music, which layers supple R&B-style vocals over introspective party music to create something resembling pop music circa 2057. Her new album, Crisis (Dropping Gems), is out June 18, and it’s one of my favorites of the year so far. As a preview, she gave us this song, “Last Time,” to premiere. Kmeto often builds her music on synths and electronic beats, but in this song she lets her feelings lead the way.

I spoke with her over the phone on Memorial Day. Not only is she super smart and cool, she has the best guttural laugh, like she really means it. —Julianne

JULIANNE: The song we’re premiering is “Last Time.” Is it a love song?

NATASHA KMETO: It’s kind of a love song. It’s a song about…there are people in your life that you have things with. And you kinda get the idea that even if things are over, it’s not really the end. The story is about the push-and-pull of being with someone who’s not ready to commit. It’s always a back-and-forth, and it never feels resolved. I feel like it’s a pretty relatable story!

Ugh, god, is it ever. But it seems kind of hopeful, too!

Yeah, or dooming! It’s either hopeful in that there’s never going to be an end, but depending on the situation that can be a good thing—it could be bad that you’re always getting sucked back into something. I’m still undetermined with this particular situation whether it’s a good thing or a bad thing! [Laughs]

I really like that you put emotional and personal things into it. Is it hard to put that stuff out there?

I’m a pretty straightforward person in general, and I always appreciate when artists are straightforward and honest. Lyrically, when I first started writing, I was more into flowery, poetic, obtuse lyrics that could be interpreted in any way. But for this album, I really wanted to use simple language and make really clear what I was talking about, and also have it be catharsis for me.

When did you know that music was first something you wanted to do?

I was raised in a really musical family—it was just something we did. I always had it in the back of my mind as something I would love to do, but I was conditioned to believe that choosing music as a career was not a very “practical” choice. I got good grades and SATs, but when it came down to going to college I didn’t really know what I wanted to do. So I went to community college to figure it out. I ended up joining a band and quitting school. [Laughs] Then when I was in my early 20s I decided to go back to school to learn how to really do it right, to dig a bit deeper into music theory. My intention was to study songwriting and do vocal work in L.A. But part of my program was digital production, and I started making music like I do now, and I completely fell in love with that process. [But] being in L.A., part of that grind, I didn’t feel like I could do anything in an arty way—I felt like I was constantly being pushed to make something that would “succeed.” So I decided to move to Portland just so I could really geek out on the art aspect of it and be in a place that would be more supportive of something different.

What were you like when you were a teenager?

I wasn’t like, a geek, but…I was an intellectual, and also a bit of a jock.

What kind of jocky stuff did you do?

I swam and played basketball. So I would kick it with the jocks, but I [studied] journalism for four years, so I actually was considering becoming a music journalist. I was definitely a smart kid, I guess. I always hung out with older people. I haven’t really changed a lot, but I think I was very serious and very intense when I was a teenager.

Did you write poetry?

Yeah! I totally went through the whole Fiona Apple, Tori Amos thing. Very intense young lady. I have relaxed tremendously since then. [Laughs]

Where do you make music?

I have a home studio. I have my computer in my one bedroom. I really like to be alone when I write; it’s a very solitary process for me. Coming from being in bands and always butting heads during the creative process, it’s just a lot easier for me to do it by myself.

I come from a more traditional background of songwriting, so I compose in Logic. In my live shows, I use software called Abelton Live, which a lot of producers use because it’s very loop-based and sequence-based, which a lot of electronic music is. But I’ve always written songs in the way I would record them if I were a band. It creates a more interesting structure. A lot of women that I talk to come from that songwriting perspective, like maybe they play guitar or piano and sing. If someone is looking to do straight-up dance music, though, I wouldn’t recommend approaching it that way at all. I would probably recommend getting a sequencer [like Abelton Live or FL Studio].

I’m really excited about doing this [for Rookie], because I’m so adamant about inspiring young ladies to get into tech-y stuff and DJing. I know when I was that age I looked up to women who were doing their thing.

What’s on the docket for when Crisis comes out?

I’m playing festivals this summer and touring the U.S. in the fall. I love to be on the road, so I hope this record gets me enough exposure that I’m getting a lot more shows. I’m starting to work on new stuff, too. Mostly I just hope [Crisis] resonates with people. It’s really the most honest thing that I’ve put out, and it came from a really long, tumultuous time in my life. So I hope the record reaches people and makes them feel less alone. ♦