Kind of like the Secret, but not as Ayn Rand–y. 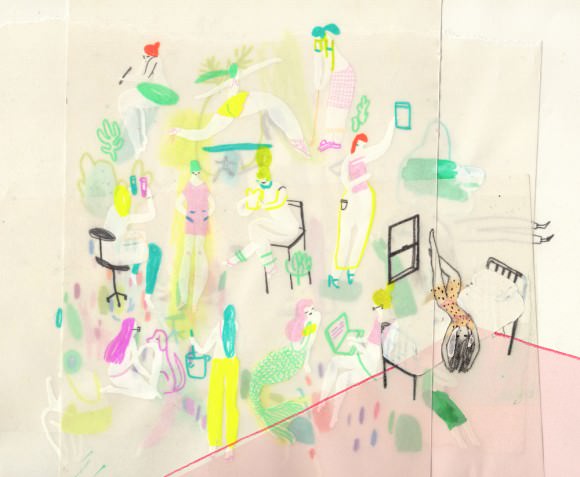 A favorite game that I play with my boyfriend has us asking each other to pick which of two jobs we’d rather have, and then explain why. For example, I’d definitely rather be the proprietor of a diner than an exotic-pets dealer: I prefer people to animals, and although it would certainly be edifying to have the intimate knowledge of a Komodo dragon’s mating habits that can only come with firsthand experience, how could that ever contend with the privilege of unlimited free cheeseburgers?

I am really good at this game. When it’s my turn to pick, I contemplate my options (Manicurist or banker? Longshoreman or opera singer?) almost as seriously as I would if these alternate-reality professions were being offered to me for real. That’s probably because I’ve been doing this little exercise on my own for as long as I can remember. Starting from when I was a little tyke, I’ve maintained a mental résumé of someday-maybe dream professions—each one representing an alternate reality that I can mentally visit any time my current one is feeling particularly gray and horrible. Here are some all-time classics from the Amy Rose Escapist Dream Job Agency:

I recognize now that this list is wildly disparate and in some cases impractical, but when you’re a consummately lonesome young person stuck in a town and a life you hate, as I was for the first 17 years of my life, your line of thinking is basically: I’ll do anything, provided it isn’t this. When I was a teenager, fantasy was my life force. The less any of these hypothetical future lives had in common with the one I was living now, the better. Truckers, for instance, have to keep moving—so it’s OK if they don’t have any friends. There aren’t any sisters around on the wide-open road to pluck at their insecurities. They just listen to the radio and drive. In my dreams, I did too.

When I was 15, I got my first bona-fide, non-babysitting JOB-job—you know, the kind where you’re paid with an actual check with taxes taken out of it instead of a few craggy bills counted out in front of your face right before you bike yourself home. I would be working in a library, which I decided counted as being a librarian, which happened to be one of my most fervently-imagined mind-gigs. I was massively excited, because my greatest and basically only pleasure in life was/is reading books (OK, also the occasional breakfast sandwich). I imagined that my days in the stacks would be spent squawking excitedly with people who were similarly passionate about literature. I envisioned myself as something of a beloved benefactress to my town’s more bookish citizens. I would tirelessly recommend novel after novel, generously look the other way on late fees for patrons with fascinating tastes, and make the occasional corny/incredible librarian joke when the situation called for it. (“Dewey decimal system? DO WE EVER! Oh god, I’m sorry. Yes, travel books are in the 900 section.”) I wouldn’t be just a “junior librarian”—I would be the folksy, locally adored heart of the West Caldwell Public Library and possibly even of reading itself. Despite my perfect eyesight, I considered buying a pair of those glasses on a little chain in preparation.

There were a few flaws in my vision of minimum-wage literary bliss. Chief among these is that I was working at a LIBRARY, aka an establishment famous for its strict policy of utter and constant silence—why, exactly, did I think working there would involve so much animated conversation? My actual duties entailed no engagement with fellow bibliophiles, and plenty of emptying wastebaskets, alphabetizing my fingers to the bone, and continuing to daydream about other professions, ones where I might get to interact with the world and its people with the kind of enthusiasm I had fantasized would perfectly complement my WCPL name tag.

I kind of always knew I would end up writing in some capacity, but back then, when the “real world” outside my shitty hometown was just as remote as any fantasy, my more far-flung dream jobs seemed just as possible as, like, an internship at a newspaper. And “writer in New York City” seemed just as fantastical as “professional skateboarder” (despite being far too clumsy to even land an ollie). Now that I actually have a dream job in a dream city (and a dream boyfriend to boot), I no longer need to fantasize quite as much about parallel-universe existences. My real life is exciting enough. But I don’t think I would have gotten here had I not spent so many hours and days and years back in NJ mentally dropping myself into other worlds, other lives. Ask anyone who made it out of a miserable teenagehood, and I’ll bet they’ll be able to list a hundred future selves they used to dream about. Those dreams, no matter how unrealistic, become a ladder that you use to escape.

I will always be thankful for the outlet my daydreamed professions gave me when all I wanted was anything else, and it’s nice to know that the Amy Rose Dream Job Agency will always be open for business for those moments when I still need a quick mental getaway. And you know what else? I’m still pretty certain that I’d be totally dope at naming nail polishes—just now as I’m writing this, I came up with Business As Blue-sual, aka the perfect shade for today’s modern working woman, regardless of whether she’s an electrician or policewoman or whatever. Call me, Essie. ♦