His music is so much loneliness, which is something I understand. 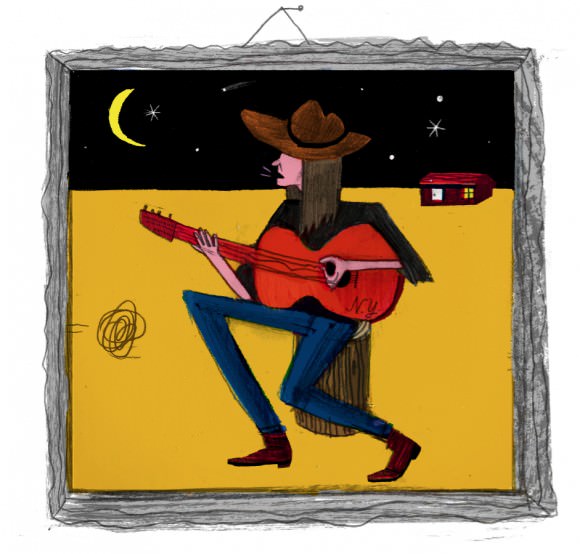 I feel most like myself when I am alone and making wishes. Being young is a whole lot of that, but sometimes I get tangled in busy things and anxious breathing and forget what my comfort zone is: aloneness and longing. When I need to be reminded, I listen to Neil Young. He’s the Canadian-born symbol of my personal Americana, where part of me believes I’ll have my own Broken Arrow Ranch someday, where home means quiet and fame is a farce.

When I was 12, I was given the thing I most wanted for Christmas: a record player, plus whatever albums my dad’s side of the family thought I should start with. A ragged copy of Neil Young’s 1972 album Harvest was among the hand-me-downs from my aunts’ college days, and after a few listens it became the only one that mattered. “Heart of Gold,” a candid song about being alone and yearning to connect with another person, made me feel, somewhat ironically, less alone. “Keep me searching for a heart of gold…and I’m getting old,” Neil sings, but he doesn’t sound bitter about not having found it yet; he sounds weary from his search, but with a genuine (if tattered) faith in humanity. The song “Alabama” taught me that “the devil fools with the best-made plans,” and that truth got me through the next few tumultuous years of my life.

I think I was in 11th grade when I bought my own copy of Everybody Knows This is Nowhere (1969), Neil’s first album with his backing band Crazy Horse. Here were even more songs that were astonishingly similar to my feelings, as enigmatic and intensely personal as Neil’s lyrics are. The title track is a hymn of homesickness that I regularly return to. Although I would never describe my literal home as “cool and breezy,” that’s how I think of my mental fortress of solitude—and how I hope I might describe a future physical dwelling where I might be able to finally relax. I burned a copy of a friend’s Live at Massey Hall CD and stashed it in my mom’s glove compartment to turn every grocery run into a deeply emotional experience. In high school I was pretty good about going to bed before I’d regret it in the morning, but those nights when I failed, the YouTube search bar plus “neil young demo rare” was usually to blame. “Everybody’s Alone” is one of my favorite songs that I found that way. I presented “Love in Mind” in theology class at my Catholic high school when we had an assignment to bring in something we thought we could use as a prayer. I really fell in love, or something. Fell into understanding, maybe.

Neil Young’s music is so much loneliness, which is something I understand. Being young is a whole lot of that, too, and that’s what makes me feel at home in his songs. Just like me, Neil does know happiness: He has been in love, achieved world fame, bought a ranch, shared it with dogs. Still, no matter where he is in life, his art still lives in longing. Like me, he finds comfort in aloneness.

There’s a lyric in the song “On the Beach” (from the 1974 album of the same name) that goes: “I need a crowd of people, but I can’t face them day to day.” The first time I heard it I was going through that overwhelming period of life called teenagerhood, and I related so hard that it just about knocked me over. I know I need other people, and that some part of me always longs for belonging, validation, closeness, congratulations. But there’s still nowhere more comfortable to me than solitude. The crowd of people is everything that I think I want, but I always need an escape hatch to somewhere I can be alone and hide. Being alone breeds longing, but pining for something always feels better to me than striving for it does. Alone time gives me space to wallow in longing, which is my natural habitat. I think Neil feels the same way: “Even when I’m happy,” he once said in an interview, “I write about being lonesome.”

Four summers ago I checked Jimmy McDonough’s 2003 Neil Young biography out from the library. I had read John Lennon’s the summer before, and it had filled in so many blanks about the era and the life that his songs came from. I got to see the musical legend in a real-life context, to understand how his work intertwined with his fame, his image, his childhood, his activism. I started to hear his music as a response to the world he lived in, and my appreciation for it was deepened and enhanced. I wanted to have that same experience with Neil Young and his music. For so many years his songs were like lullabies to me, security blankets I curled up with when I needed soothing—but I knew nothing about what they were supposed to “mean.” As I got older and craved understanding more than comfort, I started to wonder what he meant when he told us to “look at mother nature on the run in the 1970s” in “After the Gold Rush.” When he sang, “Don’t let it get you down—it’s only castles burning,” I wondered what his burning castles were. There were more than a few times in life when I heard myself in “Cowgirl In the Sand”, but differently each time—whether it was turning 18 and realizing the power that was being “old enough now to change [my] name,” or growing out of childhood to understand what it was “to be a woman and to be turned down,” or being 15 and awkward and hoping I was a diamond in the rough, or a “ruby in the dust.” But I wanted to know: Who was this cowgirl really? Who was she to Neil?

I don’t remember the exact moment when I decided to close the book, but I never got farther than the first few chapters. Not because it wasn’t well-written or -researched, but because I realized that unlike with John Lennon, I felt too close to Neil already. Biographical facts weren’t going to get me any closer; I already understood his heart. Actually, that’s not quite right—I don’t know Neil Young at all, but his music makes me understand myself. Knowing more about him isn’t the point.

I’m an analytical person; when I feel something, my brain wiggles around trying to objectify, rationalize, and explain it so I can make sense of it. This is how, by and large, I understand the world…but not all of it. The people and things I find the most magical are the ones that I allow to remain mysteries to me. I let myself love them without trying to figure them out, because I think any attempt at analysis would unravel the magic threads that connect me to them. Neil is exactly this to me. There is something about his music that I can’t explain, a connection that I can’t quantify with answers and explanations. Neil escapes the churning gears of my brain, and I follow him, “out of my mind, through the keyhole in an open door, happy to find that I don’t know what I’m smiling for.” ♦