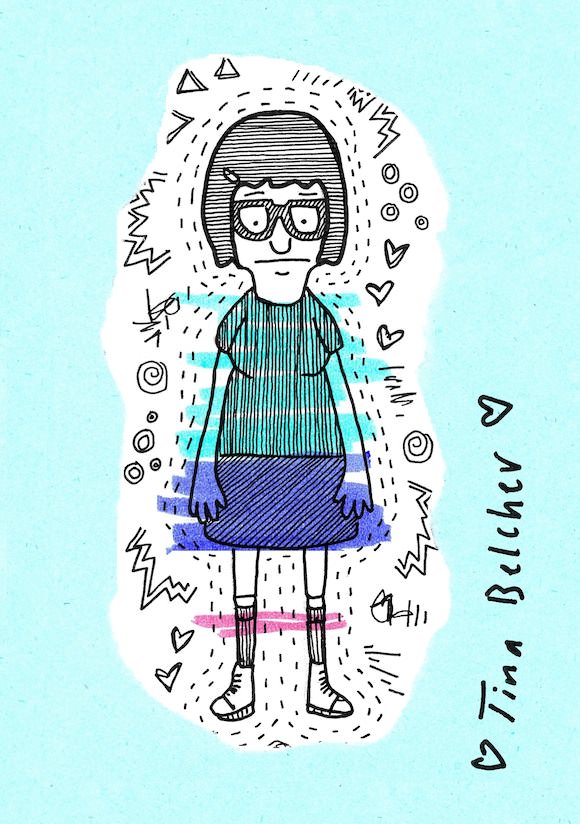 Puberty is a great divider. The shift from “stupid” to “cool” arrives fast and hard, as if an asteroid of hormones has smashed into your brain, leaving a crater between what is acceptable and what is most certainly not. Simple things—like laughing at someone’s joke, tapping someone on the shoulder, or even the way you walk down a hall—suddenly take on deeper meaning as puberty makes us excruciatingly aware of how our actions and reactions are being monitored by others. For most of us, it’s impossible to cross that divide without worrying about what other people think of us. Being a teenager is an intense and confusing experience, and it doesn’t help that we’re often seen as walking zits with a propensity for texting as opposed to, you know, human beings with complex emotions.

So thank the pop culture gods for Tina Belcher. She’s the eldest child of the family at the center of the Fox cartoon Bob’s Burgers. At 12 years of age, Tina is right smack in the middle of the puberty-driven “cool”/“stupid” divide. I’m awarding Tina Hero Status for her ability to navigate this tricky stage without shame, and with confidence in the face of staggering awkardness. Here are some of the things I love about her:

1. She’s open and honest about her body.
The first words we hear from Tina (voiced by the wonderful Dan Mintz) in the first episode are “My crotch is itchy.” She doesn’t say it to a school nurse, a best friend, or her diary—she says it to her father, in front of her entire family. She’s not afraid to complain about things like bra chafing or to freely admit that her breath smells like fish. No matter what Tina goes through—whether it’s “pubing out pretty hard” (in the words of her sister, Louise) or slipping into her alter ego, Dina, an extroverted food-truck worker——she retains a strong sense of her own identity. She approaches everything with curiosity, even when she’s riddled with anxiety (usually expressed through the classic Tina moan), and ends up with a serene kind of acceptance that she’s going to be OK.

2. She’s confident about her sexuality.
When Tina’s parents ask how she wants to celebrate her 13th birthday, she has her answer at the ready: a smoke machine and the perfect first kiss with her major crush, Jimmy Pesto, Jr. She makes no secret of her desires, including her desire for Jimmy, or her admiration for the male posterior (Tina loves butts and all things related to butts). She doesn’t wait around for boys to ask her out; she goes for what she wants, including taking Jimmy to the dance, kissing another love interest, Josh, behind the milk case, and a failed attempt at a love triangle with both of them. She doesn’t see rejection as failure, though, but rather as a necessary byproduct of taking risks.

3. She’s a good sister.
The Belcher kids have very distinct personalities (Tina is deadpan, Gene is hyperactive, and Louise doesn’t take crap from anybody), but they all support one another. In the season three episode “Boyz 4 Now,” Louise reluctantly helps Tina get to a concert by her favorite boy band, then unexpectedly falls in love with one of the band members and needs Tina to help her navigate her first crush.

Tina also allows Louise to coach her in areas where she’s lacking confidence: Louise’s take-no-prisoners attitude towards kissing, for example, gives Tina the boost she needs to step past her insecurities.

Tina’s empathy and her unwavering playfulness and curiosity (even as age pulls her away from her siblings) make her relationships with Louise and Gene deeper and more nuanced than any other sibling relationship on TV.

4. She’s a total weirdo (in the best way).
Tina Belcher is a writer, a daydreamer, a horse girl, an aspiring reporter, a terrible driver, a capoeira dancer, a romantic, an espresso addict (for a little while), and she’s always on the lookout for new erotic friend fiction ideas, particularly those involving butts. She has lots of funny sayings, like “My heart just pooped its pants” and “I have a complicated relationship with zombies. They’re dangerous but I love their swagger.” Come on—she’s 100 percent the best in every possible way. If she knew we were giving her Hero Status, she’s probably respond with her trademark humility, which only makes us love her more. ♦