The night everything changed.

Friday Playlist: Hanging Out With the Lisbon Sisters 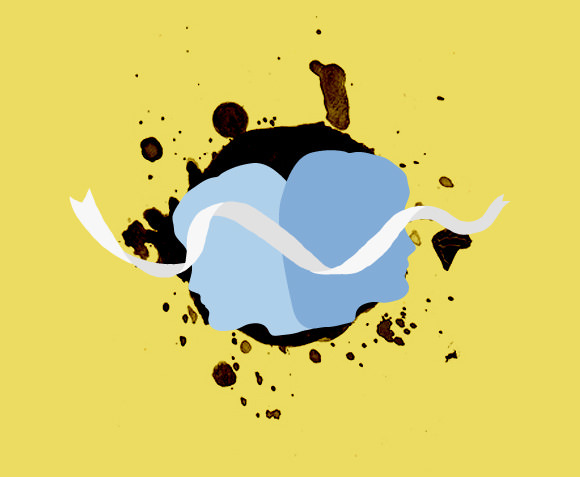 We’re at a concert, some place I forget the name of (the harder I try to remember, the more I’m sure I’m going to be wrong), in a part of Philly that’s just warehouses, rust pouring out of their joints. It’s the fall our friends dropped Suzanna. She’s dancing next to me, her moussed hair bouncing and the glitter on her cheeks catching light like in magazines. Rumor has it that at parties she’s been asking guys if they “want a tour of the house.” This was the last straw for Tara and Alexa. They decided they couldn’t save her.

Next to Suzanna I am some pale mutant thing. She is wearing a miniskirt. I am wearing my ripped jeans, the other ones I save for work on Saturdays. My eyes are too big for my head and my hair does not have a life of its own. After I picked Suzanna up today, all sparkly and smelling like fake vanilla, I told her she was prettier without makeup. “Well, you’re prettier with it,” she said, and offered me her lipgloss. She agrees with my mother, I should smile more. The only time she ever came over to my house she went to the fridge first thing and poured herself a tall glass of my father’s organic grapefruit juice. She drank it down in two gulps, wiped her mouth and then smiled at my mother. “How are you doing Kathleen?” she’d asked, “Hot, isn’t it?” My mother isn’t one for formalities, but she remembers things like that, adds them up in her head.

“Is not Johnny K. the hottest guy you’ve ever seen?” Suzanna says to me.

“Sure,” I say. I am doing some kind of bobbing motion with my shoulders that I hope passes for dancing. I take a drink from her flask.

“I’m going to fuck him,” she declares, grinning at me over her shoulder. At least two shaggy-haired boys near us turn to stare at her.

“Your shirt’s falling down a bit,” I say, pointing with the flask.

“Good.” By the end of the concert we are so close that Johnny K.’s holy sweat drips down onto us every time he spasms with his guitar.

I met Suzanna in the bathroom before gym class last spring. She was smoking in the stall and I was changing into my shorts by the sink. She swung open the door and laughed out loud at my pink underwear, but then said sorry and offered me a drag. I shook my head, but it was the first friendly thing anyone had said to me since I’d moved here a month before. She introduced me to Tara and Alexa. They’ve known Suzanna since elementary school and think it’s strange, the way I follow her around. But then, they still introduce me as Marisa, from Wisconsin.

Part of it is she was my first friend on the Main Line, which in spring felt colder to me that any Midwestern winter. Part of is it that I’m not in any position to judge her. One day last month Sean Paterson offered to give me a ride, and since then I’ve been hanging out in his basement a couple of time a week after school. We go to Wawa first, and I get a slushie and he gets a cheesesteak, then we go to his house and get high. He taught me how to open up my lungs and inhale. Afterward, the world’s static-y, blurry, the TV hums to us and his arm sits heavy on my shoulder as I sip melted cherry slush. My mother thinks I’m at Suzanna’s, Suzanna doesn’t ask where I am.

When the concert lets out, the parking lot is thick with green-smelling smoke. I take a deep breath of it and start off towards the car. When I turn back, Suzanna is not following me. She’s standing at the edge of the crowd waving for me to come over.

“What?” I say, when I’ve pushed over to her. She grabs my hand and her thin hips slip us by the guard ushering people toward the parking lot. Then the shadow of the building falls over us and we slide unseen into the dark. She leads me to the back of the lot where there is a tattered fence. From the back of the building beyond it, we can hear voices, laughing.

“Suzanna—” I start. She presses her finger to my lips. I want to go back to my car. Drive back. Not go to bed. Make fun of a movie in our pajamas. The weight of her body next to mine unpresses. She steps through a break in the fence and rounds the corner of the building. I hesitate and then slide through. Behind the building there’s a bus parked, light glinting on it from a fire someone’s lit in a trashcan. It forms a small pool of light and a group huddles around sitting on makeshift benches made of milkcrates and planks. And balanced on one of them, drinking a beer, is Johnny K.

“Well, who’s this?” says a guy with bleached hair as we approach. The asphalt is crunchy with glass and specked with cigarette butts. Suzanna’s hand leaves mine and goes to her hip.

“You know you’re not allowed back here?” says a girl with greasy hair and a leather skirt.

“Don’t worry about it,” Suzanna says, perching herself next to the bleached haired guy.

“Please, sit,” he smirks, but then stares down the front of her shirt. “Johnny,” he says, holding out a hand for her to shake. I recognize him as the drummer.

“You’re Johnny too?” she says. “I thought there was only one Johnny.” She giggles, trying to make eye contact with Johnny K., who doesn’t seem to notice that we’ve arrived. The greasy-haired girl rolls her eyes and gets up, freeing up space on the other bench, next to Johnny K.

“Sit,” Johnny number two orders me. Suzanna frowns as I squeeze myself next to her target. “Beer?” I nod. He tosses me one, nearly hitting Johnny K., but I catch it. “Nice,” other Johnny nods.

“So,” Suzanna says, pointing to Johnny K. “why does he have to get the K if you’re less famous?” Someone laughs at her.

“Who’s famous here?” says other Johnny, laughing, thinking Suzanna’s flirting with him. “And how old are you?” I busy myself with drinking, trying to strike out a panic that’s been rising in my throat all week. I check my phone. He hasn’t called, and I can’t tell if I’m relieved or upset. Johnny K.’s leather jacket smells like a dead cow. He’s talking to some guy on the other side of him. He hasn’t said a word to either of us, but his arm begins to press into mine and I can’t shift over. People start to scatter, another circle forms in the semi-darkness. I think of my mother, who thinks I am already tucked in bed. I think of her knowing I took off my clothes for Sean Paterson on Thursday, who I am not even sure I like, our mouths dry and tasting like Wawa, sinking into the couch that always feels strangly damp. A That ’70s Show rerun is on. “Hey, it’s your state,” he said.