Empty With You Gone

I found an unlikely friend, and then I lost her.

Because You Can: Retro Beach Bunny 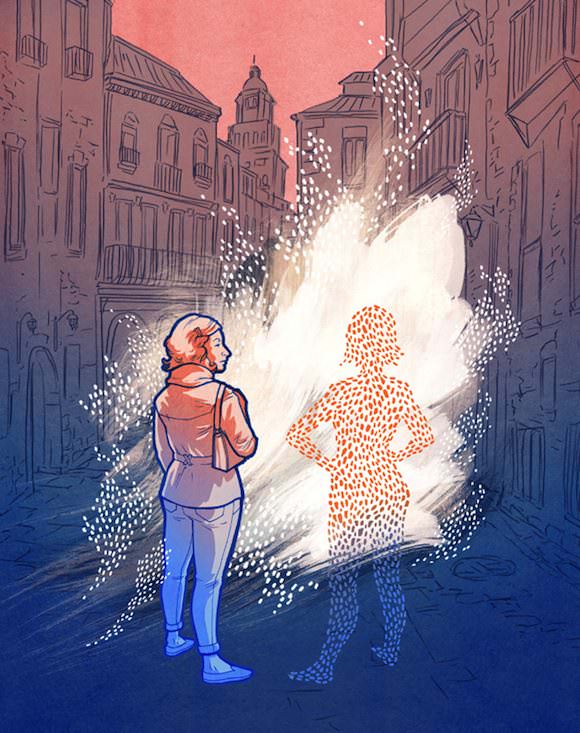 The thing I remember most about Jamie is her voice, which is weird to admit, because it’s the very thing I hated about her before I got to know her. The first time she spoke to me was during a six-course lunch, when she tried to get me to eat a piece of horse. “Don’t you want to taste it?” she asked, waving a chunk of glistening brown meat in front of my face. It was January and the first week of my semester studying abroad in Bologna, Italy. The 20 students in the program filled a small Mantovian trattoria. I was jet-lagged and cranky and I wasn’t in the mood to make small talk or listen to the tinkling laughter of strangers.

I realized too late that I had seated myself next to Jamie, a girl I recognized from the dorms and dining halls of our Connecticut college. She’d been an RA (resident advisor) and had helped run orientation when I was a trembling, terrified freshman, which meant that I’d watched her perform her friendliness in public way before I’d known her name. I automatically distrusted the boisterous way she bounced around and seemed to sing her half of conversations. She was too easily amused, her mouth too open, and her laughter too promiscuous to be real. In college, I had become the kind of prickly person who dismissed anyone who tried too hard to please. People who cared so much about being liked were often quick to be cruel—at least that’s how I saw my childhood bullies, the ones who teased me for not smiling enough. I suspected easy friendliness and wore my shyness as a shield. I weighed my own words judicially: The less I revealed, the less vulnerable I’d be. I made friends at rock shows, where the volume of the music made social preambles impossible. By the time the bands stopped playing, no one was sober enough to remember the strange or stupid shit you might say.

But now I was marooned in Italy, far from the dingy, spray-painted basements and cozy dorm rooms where I’d spent the previous three semesters. Jamie had hardly seemed to notice me while we devoured our delicious pumpkin ravioli. Then the next course arrived: white platters bearing steaming meats. We peered at our printed menus. Cavallo. HORSE. A ripple went down the table. We had been served horse for lunch. Jamie let out a high-pitched whinny, and then laughed at her own irreverence. She popped the meat into her mouth. Delighted with herself, she neighed a few more times, then turned her attention to me. She noticed my plate was untouched. I wasn’t eating horse.

“So? Why not?” She stabbed a piece with her fork and held it out to me.

“Um…” I stammered, ponies prancing before my eyes. The others at the table goaded me on, glad to shift focus away from their own crowded plates. I had no choice but to banish the ponies. I closed my eyes and took a bite. The table cheered as I chewed. It was gross—lemony and tough—but I was triumphant, and glad for their cheers. Jamie’s were the loudest of all.

Now that I know I’ll never hear it again, I think about the sound of Jamie’s laughter. I only began to understand how powerful it was when she turned it on me like a weapon and won me over by force. It was not long after the horse-eating incident, and I was sitting in the middle of an overheated dorm party, staring off into space and doing my best to disguise the tongue-tied nervousness that often hits me in crowds. I hoped I looked cool, not lonely or sad because I hadn’t been sucked into the bright, animated conversations that were swirling above my head.

Without warning, Jamie jumped into my lap, so that we were sitting face-to-face, seesaw-style. She swung her legs giddily like a rambunctious toddler. She was a petite girl, barely five feet tall, but her body was round like a plum, and my knees creaked under her weight.

“When I first met you, I thought you were a bitch,” she slurred, her hands on my shoulders. “But you’re just shy! I think you’re great!” She giggled at her own boldness and rocked back and forth, so that I had to hug her to me to keep her from tumbling off her perch. Her hiccupping laugh shook her from shoulders to diaphragm, dissolving my skepticism with each vibration. Blindsided by her warmth, I was too flattered to resist; I barely muttered “thanks” before she hopped off to rejoin the party. I watched her disappear into the crowd.

Jamie was always disappearing into a crowd, but you could usually find her by following her laughter, which I recall as something like a giggle that transformed into a honk. It was a more complicated thing than I’d first thought. She used it intentionally, strategically. I had experienced how it could disarm, but I later saw how it also helped her deflect her own discomfort and sadness.

When we went dancing in a basement club below the McDonald’s in the center of Bologna, Jamie flung herself into the throbbing masses. While I did my best to blend in with the wall, Jamie made friends with strangers on the dance floor. I watched while she gyrated ecstatically, her hair damp and stringy from the humidity. Hands grabbed at her ass, her breasts, her pale, oval face. She danced with her mouth open and head thrown back. I felt protective of her, and embarrassed by how much she seemed to like being pawed by strangers. Then I felt silly for judging her. She was having fun and I was not.

Despite my wariness, Jamie had decided that we’d be friends, and I had no choice but to comply. Our program was small and classes in Italian language, literature, and culture took up most of the day, so it was inevitable that I’d feel reciprocal affection for her and her enviable ability to find infinite amounts of humor and possibility in the absurd moments that filled our daily life abroad: the incomprehensible lectures in a language we could barely understand; the mystifying trips to the grocery store where we’d try to buy pesto but actually grab something called salsa verde that tasted like anchovies; the condescending tone of the program director.

One stormy March afternoon our professor made us watch a particularly indecipherable late Fellini film. Next to me, Jamie was doodling large blossoms and movie star faces with flowing hair and pouty lips. I lost track of the movie as I watched her scribble faster and faster. She had started a list titled “My Friends,” and while Giulietta Masina and Marcello Mastroianni spun across the screen, she scrawled names across blank pages. At our college in Connecticut, Jamie was popular, as people who laugh and joke and drink usually are, and she had a lot of friends, from a core group of fiercely loyal roommates to casual buddies from the improv and theater scenes to classmates from her painting classes. She ranked the names on her list, marking her favorites, distinguishing between the people she loved, liked, just enjoyed, and the ones who reciprocated affection. I tried to sneak a closer look, but I was unable to see where I fit in her pantheon, and I didn’t want to disrupt her intimate, morbid exercise—it seemed to me that her ruthless parsing revealed the distance between her projected confidence and her hidden insecurities.

I had spent months hiding my own longing with a joke, sending everyone at home a postcard featuring a picture of a single tortellono, a spacecraft from Planet Pasta, casting its shadow over the center of town. In urgent red letters the text read, MI SENTO SOLO! (I feel alone!). That afternoon, I decided to try Jamie’s way, for once. It burned a little bit to quantify affection, to reduce complicated associations to an inventory in pen and ink. (This was the time just before social networks made it possible to pull up lists of friends with the touch of a button.) As I wrote, I saw how the names of friends that we repeated to ourselves and to which we addressed funny-sad postcards were incantations against loneliness and the confusion of being 20 or 21 and untethered in the world. It was about wanting to count and be counted. It took me only a minute or two to finish my own list. Meanwhile, Jamie’s pen sprinted on, her page filling with curly script. I marveled at her stamina, her willingness to commit her affections and insecurities to paper, to be reckless, to acknowledge the distance between herself and others, to really feel it.