Big Girl in a Pretty Dress

I had to be thin to wear the clothes that made me happy—but getting thin made me miserable. A fat femme’s catch-22. 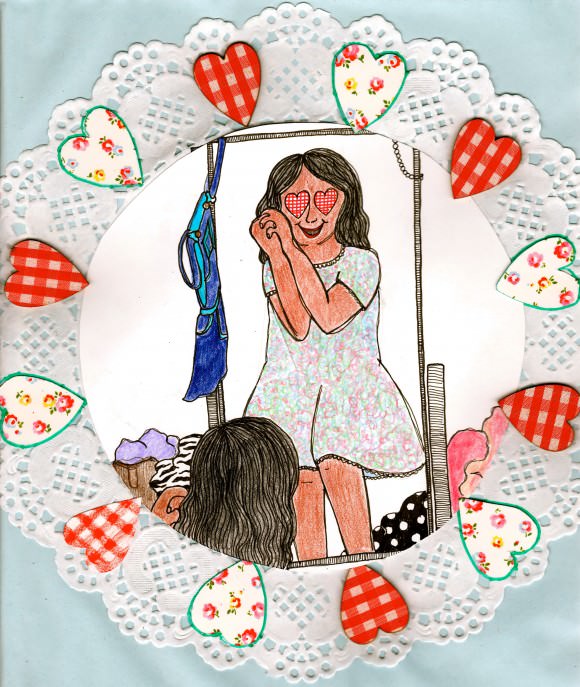 For as long as I can remember, I have been a girly girl. As a child all I wanted to wear were foofy, frilly dresses made of lace and tulle—concoctions that were more confection than clothing. But my mother believed in hard-wearing apparel and saw my aspirations to prettiness as a vice. She dressed me in boys’ clothes—drab trousers, shorts, and T-shirts. Her only concession to my femme tastes was that once a year, on my birthday, I got to wear a dress. I always asked for one in my favorite color combo: pale pink and ivory. My mother somehow always found the plainest, least feminine pink-and-ivory cotton dress available each year—nothing with even the barest hint of lace—but it was something. 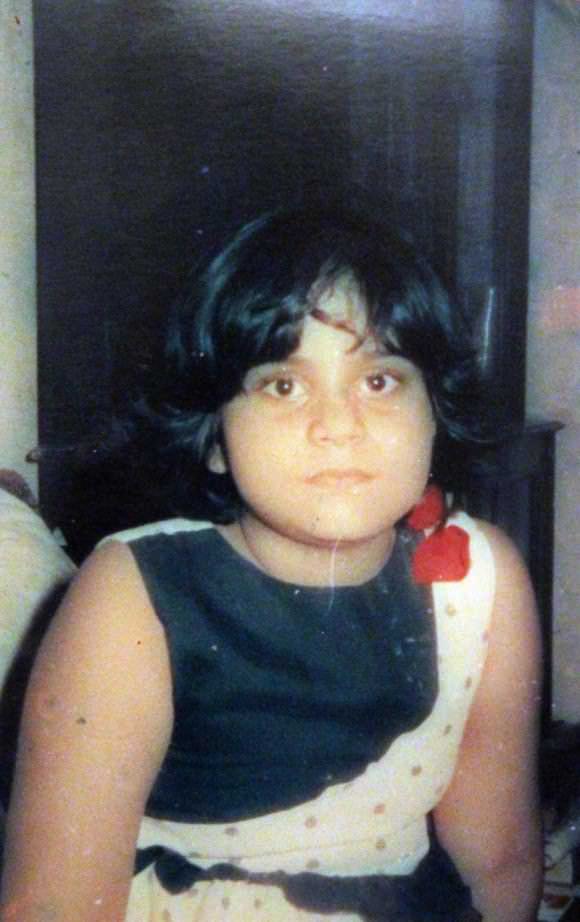 Me at age six, wearing a friend’s sister’s dress because my mum wouldn’t get me my own.

I do have one childhood memory of total, glorious sartorial fulfillment. When I was nine, my mother went to another city to work for a while. I don’t know what happened there, but it prompted a change of heart—she returned home with a buttload of clothes for me. I remember a zebra-print skater dress, a hot-pink top with cutouts around the neckline, a denim skirt, a brown mini. They were lovely clothes that I absolutely delighted in wearing—they made me feel pretty, like a genuine, bona-fide girl instead of an overlarge creature who took up too much space and accidentally hurt others if she played too rough. I wore those clothes everywhere—I played in them, slept in them, and would have gone to school in them had my school not required an uniform.

This golden age of personal-style bliss was cut short six months later when puberty added five inches and several pounds to my body, sizing myself out of my new wardrobe, all of the children’s clothing available in India at the time, and much of the women’s clothing as well. I was 5'7" and probably a little smaller than an American size eight. The year was 1996, and stores that sold Western-style dresses and skirts and tops for adult women were few in India; the ones that did exist only stocked tiny sizes. There were no “plus-size” clothes either; any female-identifying person above a size six was probably expected to wear a sari, an exceptionally forgiving garment that fits people of any size. Saris weren’t worn by children, though. A 10-year-old my size was considered a freak.

I still remember the Last Dress—the one right before I became too big for dresses altogether. It was plain cotton, but with a sweet pastel pink, blue, and green ditsy print. It represented to me everything I had been denied by the world—it gave me “legitimate girl” status and made me feel like I was as attractive (and as good) as the skinny girls around me, the ones whose long hair, birdlike limbs, and pretty dresses usually provoked envy and loathing in me. In the Last Dress, I could stand proudly next to them, my clothing a shield deflecting any snarky comments.

Then I was suddenly too big for dresses, too young for saris. So I reverted to my tomboy wardrobe of men’s cargos, men’s T-shirts, and clunky sneakers and stuck to it for the next five years. Somewhere in that time I found ONE women’s top that fit me at one of the big chain retailers that had started popping up by then. It was a maroon knit, and its boat neck allowed me to show a slight suggestion of chest, which was enough to make me feel like a girl again. I rarely got to wear it, though. Once I started growing boobs, my mother decided I should give up racy zebra prints and miniskirts and learn how to dress modestly. I remember wearing that shirt one day when I was 14, sitting on the edge of my bed, crying while my mother ranted about how I was obviously a slut who was going to sleep with any guy who paid attention to me and then come home pregnant—all because I had wanted to wear a top that exposed an inch or two of skin below my collarbones. I don’t think it dawned on her that I was a fat, shy, awkward nerd whom boys looked at only to laugh at and talked to only to get closer to her pretty best friend.

Sometimes, on Saturday mornings when my mum was at work, and I would get a few hours to myself, unmonitored. I’d open my wardrobe and dig out my old girly clothes, which by then were several sizes too small. I would squeeze myself into them and look in the mirror, admiring what I saw. There was a skirt, a tight black one that barely covered my bum and had a slit up the back to boot, that I loved. I still felt sexy in it. But only by myself, and never in public. I may have liked what I saw, but I was sure that anyone else would take one look at my thighs and recoil in disgust.

Then two things happened: First, Indian stores started stocking a few Western designs for women in my size; second, my parents divorced and my mother married my stepdad, who drew her attention away from me a little. I still remember the femme clothes I bought then—my first girly-wear in more than five years: a pair of flared jeans with flowers discreetly embroidered around the pockets, a navy top with a single pocket in the front, and white Spice Girls-esque platforms (it was 2001, and India has always been slightly behind fashion-wise). Still self-conscious about my body, I always made sure I was covered from head to toe, especially my arms and legs.

Then came one final up, down, and up on my lifelong personal-style roller coaster. The first up was more of a down, really: My mother died when I was 17 and I developed an eating disorder. I lost a lot of weight, which dramatically increased the range of readymade clothing available for me to buy. And did I ever buy them! I got lace tops, crop tops, short skirts, short short skirts, trousers that sat on my hipbones, see-through tops I wore with pretty bras, tights, legwarmers, and DRESSES. The first dress I bought was a plain denim shift; from there I moved on to velvet goth dresses, ’90s-style plaid dresses, and girly vintage dresses. Don’t get me wrong—I still didn’t love the way I looked. I still kept my arms and thighs under wraps so as not to offend any unsuspecting stranger’s eyeballs. But man, I loved my clothes.

And the low point that followed was more of a high point: I stopped feeling depressed, which made me start eating again, and naturally I gained weight. I went to college and started learning about stuff I was actually interested in and good at; I was so busy thinking about medieval studies and postcolonialism that I didn’t have time to think about my looks. I gained more weight. I spent a whole season wearing the exact same thing every day: a shabby kurta with a pair of elastic-waistband trousers and flip-flops. 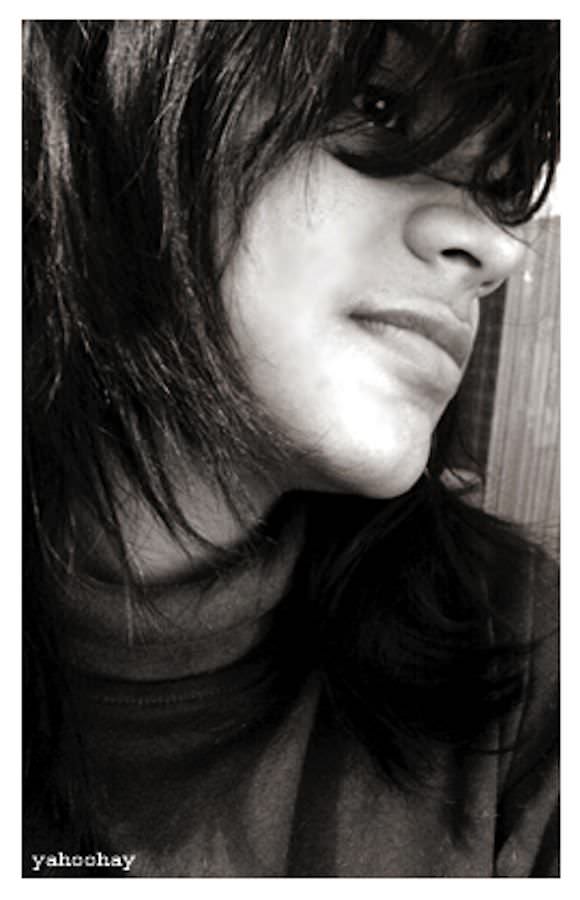 Me in uni, hiding behind baggy clothes and a too-long fringe.

Then, BOOM, one more drop: My depression meds stopped working, with the predictable consequences. By that point I thought I’d be cursed forever to ride these biannual ups and downs in my weight, my body image, my wardrobe, and my happiness. When I was fat I dressed like a boy and was depressed; I would only allow myself to express my inner high femme when I was thin. But I could only stay thin by staying miserable—the minute I started feeling good about my body, the weight would come back on, and then we were back to square one.

I finally got off that roller coaster in 2007. That was the year I discovered Fatshionista, a LiveJournal community where fat people of all sizes gathered together to post their outfits and talk about pretty much anything related to navigating the world as a fatty. That group had the same effect on me that it did on Gabi: For the first time ever, I was seeing all these amazing women my size and bigger who were not afraid of their bodies. They wore anything they wanted to, showed off arm fat and fleshy thighs and belly rolls and looked great doing it. Fatshionista inspired me to stop buying clothes several sizes too small for me as “motivation” to lose weight and instead get a wardrobe that I loved in my own size. I started conservatively: blue jeans, salmon trousers, and two red tops. But the fact that they fit and flattered and felt good on my CURRENT body, not the one I aspired to, changed everything. I could feel and look great at the size I was now. I didn’t have to change to be worthy of pretty clothes, or of attention, admiration, or love.

By 2009 I had given up pants entirely and wore dresses all day, every day. In 2010 I got my first pair of hotpants. I was wearing, with pride, the kinds of clothes I had previously thought only skinny girls could get away with. I still had body issues, because those never go away, but I promised myself never to let them stop me from wearing what I want.

It’s 2013 now, and I am back in India after three years of uni in the UK. My prettiest clothes are still packed in crates in England, waiting to be shipped to me. I’ve been improvising cute outfits with the old clothes I’ve got here, but it’s hard, to be honest. I think India is bad for my body image. I get laughed at a lot when I wear my hotpants and short skirts, and I find myself hiding in baggy jeans and plain T-shirts when I get tired of the unwanted attention. But I try to remember the pledge I made to myself five years ago—that I would never again let my body insecurities stop me from wearing what makes me happy—and I resolve to hold myself to that. Every time I force myself to love myself the way I am, I feel a surge of power. Sticking to your guns can be pretty intoxicating.

The other day I dug out an old summer dress and wore it with makeup and heels. I went outside and took a series of selfies. I think I looked pretty cute. 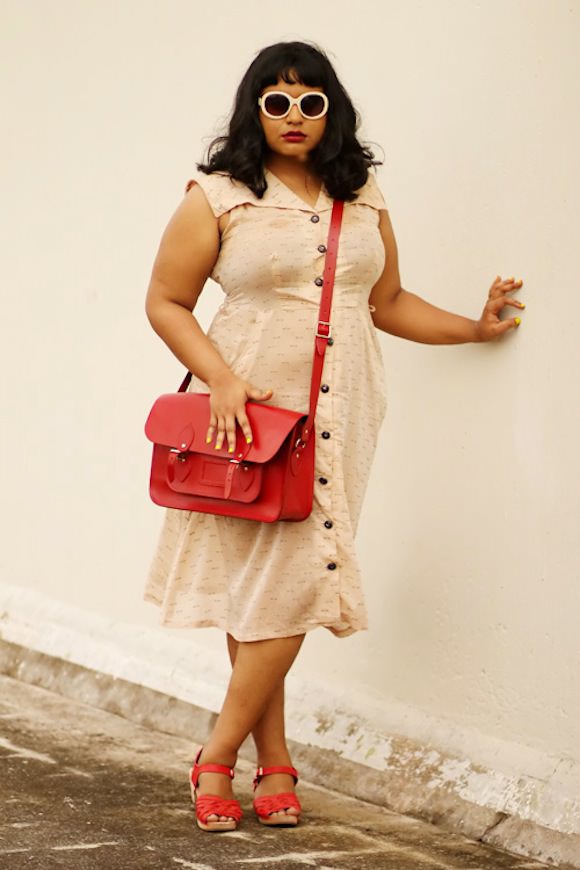 I faced the camera, my pretty dress flapping in the breeze, and shifted my body this way and that. I pouted for the camera. The sound of the shutter clicking is music to my ears. It sounds like all the fucks I do not give to the people in this world who ever made me want to hide. ♦