Because You Can: Retro Beach Bunny

Esther Williams was a badass babe, and so are you.

I’m obsessed with retro-style swimsuits, which is somewhat ironic, since this B wouldn’t know how to doggy paddle if you threw me into a kiddie pool. In fact, I’d probably panic for fear of drowning, which is the leftover trauma from childhood ear surgeries that prevented me from even being able to put my head underwater, let alone learn how to swim. But that didn’t stop me from admiring the angels of las aguas, like swimmer and actress Esther Williams or the ladies in this hypnotizingly beautiful Busby Berkeley scene from the 1933 movie Footlight Parade. In middle school, my friends and I got really into beach-party movies, a corny collection of surf films from the 1960s, the most famous of which starred Annette Funicello. So even though I couldn’t be a little mermaid myself, there was one thing that I always wanted: a fly-ass, vintage-style swimsuit. 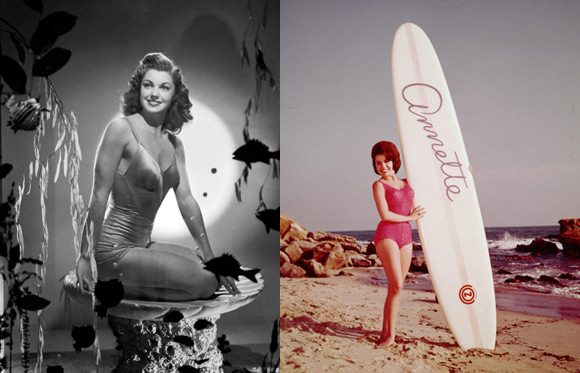 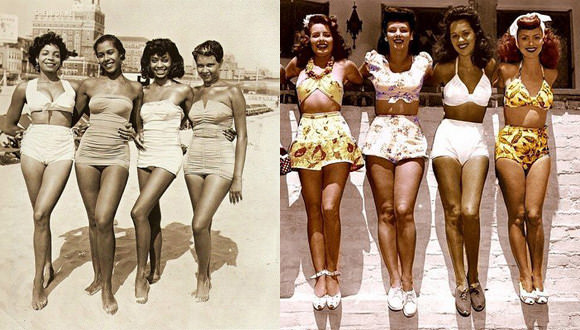 Ladies in the ’50s rocking their awesome swimsuits (source unknown).

For six or seven years, I’ve searched for these sweet silhouettes: fetching one-pieces with ruched fabric and semi-corseted bodices, and crop tops with high-waisted bikini bottoms. They’re super flattering on everyone, and IMHO, more sophisticated than the standard one-piece/string bikini. Finding an actual vintage bathing suit is the real score, but it’s pretty tough, unless you got that magic thrifting touch or access to some gems in your memaw’s closet. Etsy and eBay are a good place to start. I found this ’60s floral number and this awesome gingham two-piece, but of course it’s hard to get the right size, or to know how it fits without trying it on, which is why I’m psyched to see so many clothing companies doing throwbacks to the style. (Also nice? Not wearing a pre-owned suit, which is not different enough from “vintage underwear,” amirite?) Every year since my search began, I’ve seen more and more options, so these days you have plenty to choose from.

First, I have to begin with the Million-Dollar Mermaid herself, Ms. Esther Williams. The timing of this post is eerie and sad: Esther died today at the age of 91. She was an amazing competitive swimmer who turned to acting when World War II led to the cancellation of the 1940 Olympics, where she’d hoped to compete. (Do yourself a favor and get in the mood for summer by renting Bathing Beauty or Dangerous When Wet. Hey, gurl.) Best of all, Esther started a swim line in the ’90s, and you gotta love her raison d’être: “I put you in a suit that contains you and you will swim in. I don’t want you to be in two Dixie cups and a fish line.” Check out some of her pieces below: 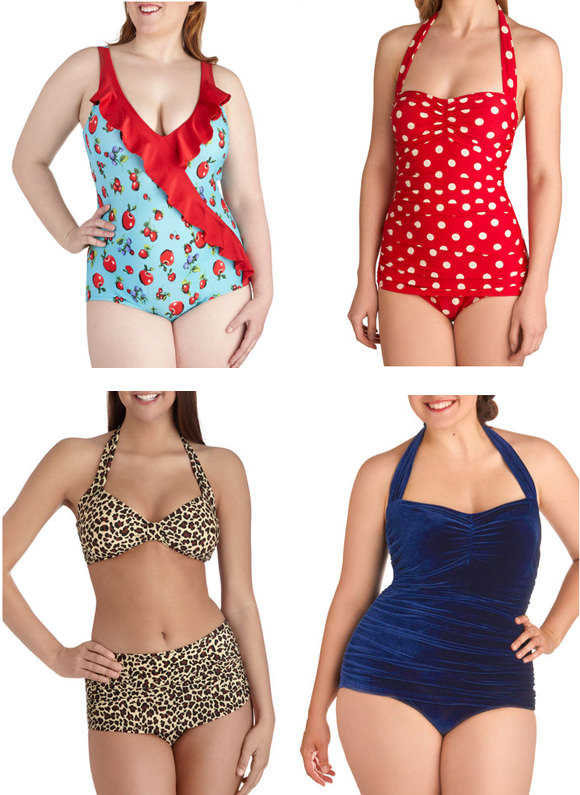 Nautical-themed fashion is my absolute favorite. It’s just a classic color palette, and never is sailor chic more appropriate than when it comes to swimwear. This tankini is perfect: It looks like a one-piece, but it’s got the comfort of separates, and comes in all sizes. And I love the anchor buttons on this one. (Incidentally, Fables by Barrie is a cool company. They make everything in San Diego, CA, so it’s sweatshop-free.) And Lolita Girl’s suits are adorable. If you’re doing red, white, and blue, you might as well go all in and get the hat, too. 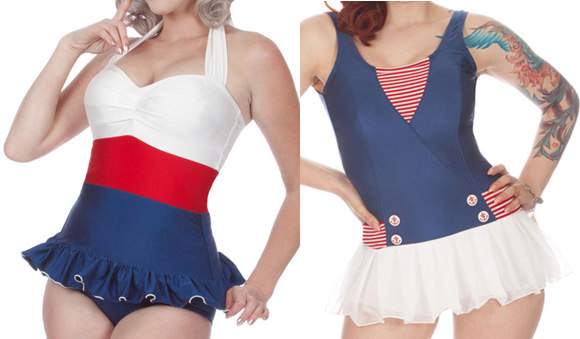 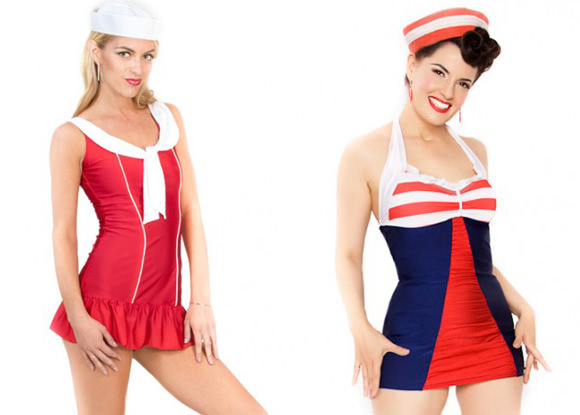 For those of you who don’t want to swim (or can’t, like moi), you can have more fun with your beach attire by going for a playsuit, which are pinup-style rompers. This one, with the red bow and the peek-a-boo front, is kind of the cutest thing I’ve ever seen. It’s perfect for poolside BBQs, or for changing into at the end of the day, when you somehow have an uncomfortable amount of sand downtown. 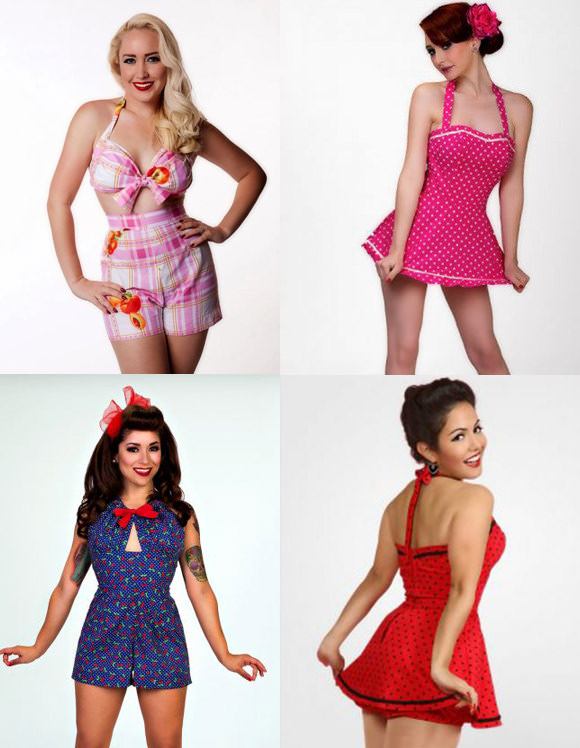 Everything here is a little pricey, because naturally everything that looks old needs to be as expensive as new, but never fret. If you don’t want to throw your dollahs around that much, Target has a good selection of retro suits, too. 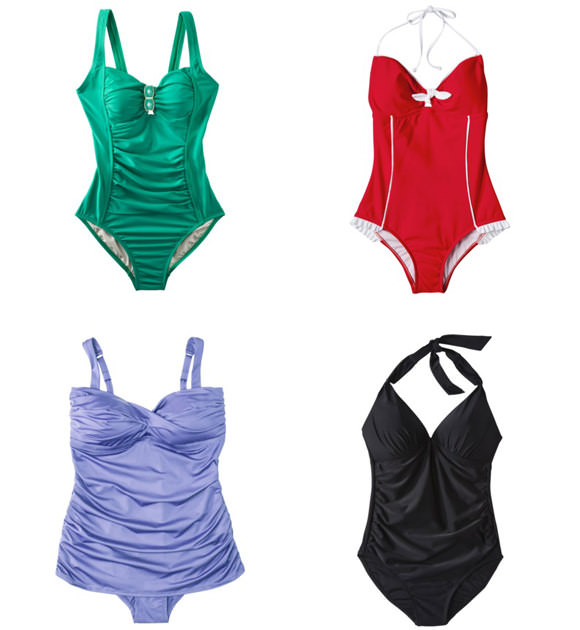 Also, if you’re not looking to wade too far into the past, check out this awesome pink suit, designed by our very own Gabi Gregg. It features the flattering cut of the high-waisted bottom and halter top without seeming like something li’l Sally Draper would wear. Whatever you decide to get, pick up some cat-eye sunglasses and a pretty flower clip to match, and you’ll be playing beach-blanket bingo in no time! ♦

bathing suits because you can busby berkeley esther williams swimsuits