Turns out you don’t necessarily outgrow every flaw.

Longing for Summer to End 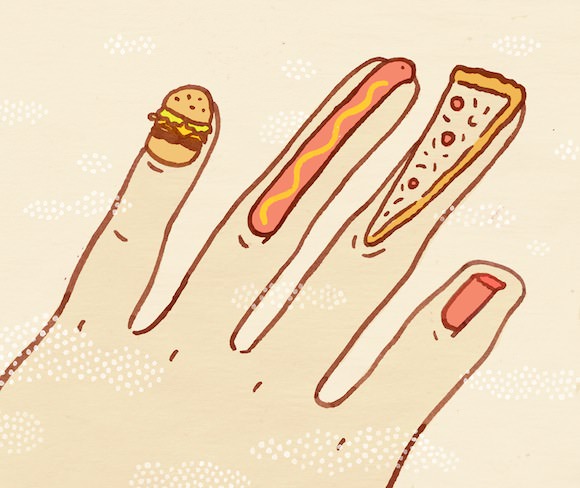 My longest-lasting habit is also my filthiest and most disgusting: I bite my nails. I do not just bite them—I chew on them. When my fingernails are gnawed to the quick, far down enough that the soft, fleshy bed underneath the nail is exposed, I sometimes start chewing on the cuticle around it. Occasionally I draw blood, or I feel a tight, sharp pain where the raw flesh presses against the ends of each jagged nail.

I cannot remember a time when I wasn’t biting my nails, or when someone in my family wasn’t scolding me for it. I don’t think I was a nervous kid, but I did like to take time to think about things, and biting my nails was something to do during that time instead of sitting there like a lump, just staring into space. At least I could look like I was pondering deep, vexing thoughts. My grandmother tried everything. When I was really little, she told me that I would bite my fingers off entirely if I kept at it. She tried to slather my fingertips in some goopy, tar-like substance that was supposed to produce a Pavlovian reaction to its awfulness, but it sort of tasted like licorice, and I powered through each bitter layer. When I was a little older, my mom tried to shame me by saying I would never get a boyfriend with hands like mine, which produced the EXACT OPPOSITE of the intended effect. Good! I thought. I don’t want to hold hands with boys anyway. By the time I did want to hold hands with a boy, I had already spent a decade shoving my hands in my mouth every 10 minutes, and the habit was too intense for me to care what other people thought. It seemed unlikely I would get any action unless I found someone who thought the nubby skin where my nails used to grow was particularly appealing, or that anyone else would consider bulk containers of Band-Aids a super-romantic gift. I rarely used nail polish, and I didn’t see my first cuticle stick until I was 29 years old, when, at the urging of a friend I was visiting at the time, I got my first manicure. The aesthetician scowled at me the entire time. I don’t blame her, but her bad vibes certainly didn’t make me want to do it again.

Most people don’t find it difficult to avoid cannibalizing themselves, but I couldn’t seem to stop. Something about it feels good. Picking at my cuticles somehow makes it easier to think—it’s like my fingertips have a direct path to my brain. Of course, it’s also really gross: I ride the city bus, which is basically a festival of germs, every single day, and I still find myself absentmindedly chewing on my fingers after gripping the warm pole. A few years ago, I sort of resigned myself to having this one skeevish habit, figuring I’m a pretty stand-up lady in every other way: I don’t pick my nose, and at least I’m not one of those monsters who clip their nails on public transportation. This was a flaw I felt I could deal with, even if I was occasionally self-conscious about it. (Some people have no problem pointing out that you are being uncouth, like the time a grandma waiting in line behind me to see Toy Story 2 smacked my hand and told me it wasn’t “ladylike.”)

Then suddenly it seemed like everyone started getting really into nail art. My Tumblr feed was overloaded with pictures of Essie bottles and friends who detailed—down to the teeny, tiny brushstrokes—how they were getting such intricate designs on their nails at home. These were constant reminders of how I was voluntarily mangling my hands into mannish stumps. The designs looked so bright, colorful, and intricate that I wanted a constellation on every talon, too. Do you know how much I would love to turn my nails into tiny hot dogs or slices of pizza? I didn’t either, until everybody else started doing it. Before this surge in nail art, I felt like I just had a bad habit, but now I’m starting to feel painfully self-conscious, like everyone is ACTIVELY LOOKING at one another’s hands—they’ve leveled up, and not getting a manicure on the reg is making me the odd woman out. I’m exposing not just my anxiety but also my tardiness on cultural trends!

I’ve read a lot of advice about how to quit biting my nails, including dipping your hands in vinegar and hypnosis. But if you were still able to carry around a security blanket or your favorite childhood toy without fear of public scrutiny, you probably would, right? Biting my nails is a quick way for me to ease my stress and burn off some anxiety, not unlike the way people rub a smooth stone they’ve been carrying in their pocket for years or do really deep stretches after being hunched over a computer for hours. It makes me feel better, which makes it much harder to stop. Get ready to cringe, guys, but I feel a sense of accomplishment when I rip away a piece of nail that has been catching on my sweaters, or I chew off that wild cuticle along my thumb. It’s almost become a game: How much can I get rid of without actually physically hurting myself? I can occasionally avoid the habit for a week or two if I’m really busy with schoolwork or sleeping a lot. But having to be basically unconscious in order to refrain from something is not the same as trying to quit.

I sometimes wish that I knew how to fix my hands, or that I could resist the urge to damage them so carelessly, but every time I’m staring down the rack of Essie nail polish at the drugstore I seem to have a philosophical argument with myself: Are you really going to give it a proper go this time? Can you be a person who buys cuticle cream or knows how to use a nail block? In some ways, mainly out of a sense of social decency, I do want to stop. I often feel strange having such a visible marker of my inner emotional state. My husband notices when I amp up the picking and biting. Sometimes he placed his hands over mine while we’re watching TV to ask if I’m feeling stressed out about something.

Like all habits, nail biting takes some work to break. It’s probably not as hard as quitting a dependency on alcohol or cigarettes, but I’ve been doing it forever, and it eases me instantly. How do you just say goodbye to something like that? Maybe I don’t have to quit cold turkey, though—maybe the goal is to figure out how to deal with whatever inner disquiet makes me do it in the first place and deal with that, and then the nail biting will just magically go away. Then again, it’s been going strong for more than 30 years. Maybe I should accept that biting my nails is just part of me.

It’s hard to figure out which parts of you are mutable and which ones are set in stone. I’ve always thought that my personality would one day evolve enough that I would outgrow every flaw I have. But that’s not how it works—there are parts of you that no matter how much you dislike them, you will never really cure. The best you can hope for is just to accept them, and manage them. That is what I want for myself overall—the ability to accept my limitations and to deal with the vicissitudes of life without hurting myself, physically or emotionally. If I can figure out how to do that, a little nail-biting won’t seem so bad. ♦