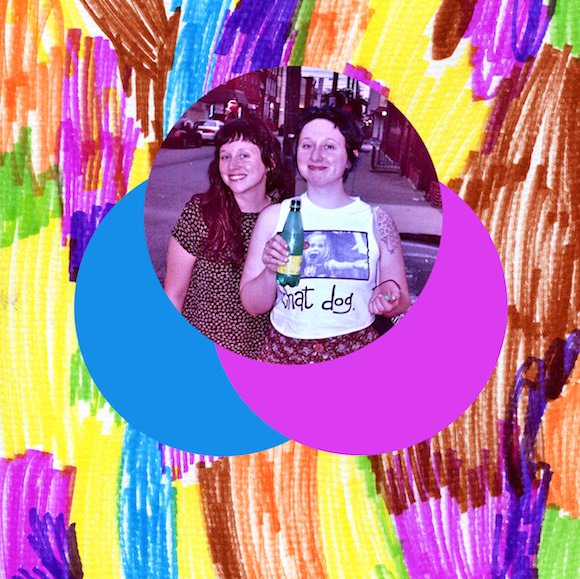 Twin sisters Katie and Allison Crutchfield are two of the most exciting songwriters currently raging: Katie tours and records intimate indie pop as Waxahatchee, while Allison fronts the fiery rock band Swearin’. Though they grew up playing in bands together in Birmingham, Alabama, and now share a house in Philadelphia, they haven’t had a chance to collaborate in a while, so it’s all the more special that they came together to cover Grimes’s “Oblivion” for this month’s theme song:

Rookie talked to Katie via Gchat about success, sisterhood, and what it means to be living your dream at 24.

ROOKIE: I‪ am glad we are doing this via chat—this way I can continue to horf all the trail mix I am eating and not gross you out by chomping into the phone‬.

‪So why did you decide to cover Grimes?

A‪ctually, I can’t take credit. Allison had the idea. We don’t make music together anymore, and she thought doing a cover would be free of any pressure. This song has been a staple in our house for a while. We were sort of late to the Grimes game. I kind of rejected her music at first based completely on the fact that it was contemporary and hip, and I just assumed I wouldn’t like it or relate to it. I was wrong, though. “Oblivion” was the first song I heard by her, and I immediately loved it, and once I researched her a little, I realized how cool she is‬.

What about this song do you relate to?‬

‪I was just so drawn in by the vocals. They’re melodic and simple and really beautiful. I read that the lyrics are about assault and feeling unsafe on the street alone, and I thought that was a really great topic that I felt politically aligned with. I’ve written about this before, too, and so has Allison.‬ ‪It’s something a feminist punk band would write about, and the juxtaposition of that with electronic pop was really cool to me‬.

In an interview with Pitchfork, you talked about how you have to write in a void, without considering how it will be heard. But you’ve gotten a lot of attention in the last year, and your album Cerulean Salt was very well received—is it hard to block that out, to try to be naïve to the idea that you now have an audience?‬

A‪bsolutely.‬ ‪I have a lot of frustrating creative energy right now and figuring out how to expel that while being busy and feeling like things are growing and getting crazier has been a challenge. I’ve been doing this for a long time, so it doesn’t really feel like it happened overnight, but this year has definitely been the most intense in my career so far‬. But I write for myself, and I know that is such an eye-roll type of thing to say, but if I can articulate my experiences in a way that feels cathartic, then I can be fulfilled creatively.

How did you get into music?

I ‪always liked music and singing. I danced for 15 years, up until I was a senior in high school. I also loved musicals. Allison and I knew every word to every song in every musical as kids. In middle school, I made friends with a girl who was really into Hole and Mudhoney, and that was like my first glimpse into anything alternative. I started getting into bands from that era, and Riot Grrrl, and eventually I heard Rilo Kiley, which was the band that made me want to start writing songs. I learned to play guitar, and Allison started playing drums shortly after, and we practiced R.E.M. and Hole covers in our basement every afternoon after school. Then we started working on my songs after we could hold our own. There was no real goal—it was just fun‬.

What was it like to play with your sister? It seems your journey as musicians has been really intertwined, yet you went your separate ways.

It was really ‪organic. I think twins have that tendency to let their identities sort of intertwine and some people really feel comfortable with that and others sort of reject it. We’ve had moments of both, but our interests were always similar and we were able to help each other learn how to play our instruments without even really knowing it. It’s always been cool—lots of bickering, but also a lot of great collaborating. I was the songwriter for years, and three years ago she started to write. I’m very supportive of that, but our creative relationship has shifted because of it. We still live together and she plays drums in my other band, Great Thunder, occasionally, so I don’t really have a chance to miss playing with her—we’re still so much a part of the other’s musical life.‬

What inspired you as a teenage artist?‬

We always loved My So-Called Life, and our first band had a song called “Jordan” after Jordan Catalano. We also went through a long phase in high school when we were completely obsessed with the Velvet Underground and the Factory scene. Before that, I was really into British Invasion bands, which I think influenced a lot of our song structures. We were simultaneously into Riot Grrrl, which shaped a lot of our politics. The punk scene in Alabama was pretty male-dominated, so getting into that pocket of punk feminism helped us keep our chins up‬.

You now make a living with music—what is it like to be living the dream already at 24? Do you have a guiding mantra that you can share with the rest of us?‬

‪I just try to take care of myself, and use the internet only for productive or constructive purposes‬. ♦

If you and/or your band is interested in doing a Rookie theme song, please email our music editor, Jessica Hopper.