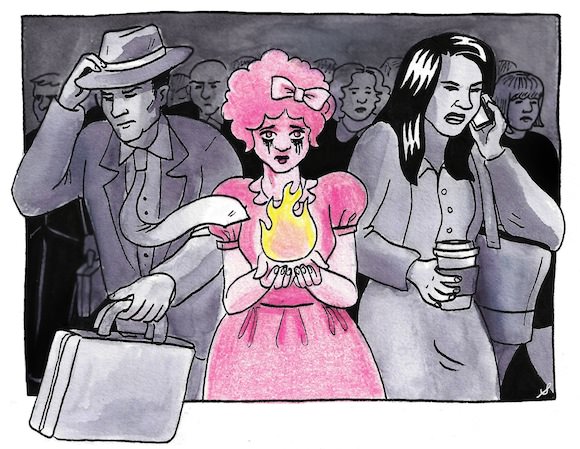 The dysfunctional relationship between celebrities and us unfamous folk is a curious thing that has me thinking. Celebrities only exist because certain people (us) make a choice to acknowledge other people (them), and proceed to back that choice with money, time, and energy. Then, in the blink of an eye, they go from saying, “Hey, world, take a chance on me!” to “Get out of my damn face!” And we sometimes resent them for it, skeptical as to whether that’s what they really want. Kanye could so easily have avoided getting onstage at the MTV Video Music Awards in 2009 and interrupting Taylor Swift’s acceptance speech, but in doing so, he guaranteed that he would remain a tabloid subject for months afterwards. Kristen Stewart, who seems to literally shrink from the spotlight, still chooses to be in an industry that will inevitably try to wring every last detail from her.

Some celebrities seem particularly helpless in these matters. When Britney Spears snapped, shaved her head, and attacked the paparazzi with an umbrella, it became clear that she had had enough and presumably yearned for the days when she wasn’t watched by billions of strangers. But for a while before that, it looked like her transformation from pop sweetheart to bad girl was just a contrived series of strategic moves to keep her relevant and exciting: an onstage kiss with Madonna, her bizarre last-minute marriage in Vegas. And while I may not have ever uttered these exact words, I remember the phrase that pushed at the corners of my mind: attention whore.

This term is applied to anyone (but so often women) who attracts more attention than we feel they deserve. It continues a long, misogynistic tradition of mean phrases invented to admonish ladies for being too visible, too shameless. And it’s ironic, because every time we call someone an attention whore, we are paying attention to them! The thing that drives me to scream at the TV and roll my eyes whenever I hear the latest news about Kim Kardashian is the very same thing that keeps me from changing the channel.

Like all judgments, it’s totally subjective. I hadn’t been a fan of Britney’s music in the years leading up to that chaotic period in her life. She, like Lindsay Lohan, seemed to always be in the news for something unrelated to her career. Yet the same could be said of Amy Winehouse, and I had a huge soft spot for her. I had decided that she was one of the most special talents, and that it was a genuine ache inside of her that led her to create (and destroy) so beautifully. I came to her defense time and again, saying that she was being victimized by the media circus, even when it became clear that she wasn’t doing anything to help herself.

There is no doubt something inside of some people (an unhappiness, I suspect) that leads them to relish our morbid fascination with their bad behavior, knowing that we are silently daring them to do something crazier and crazier while being equally repulsed by how easily they do these things that we—or at least I—would never do. Maybe they know, too, that some hypocrisy will be revealed at the moment of inevitable tragedy, when everybody chastises themselves—or, more likely, others—for watching giddily from the sidelines the whole time. (When Whitney Houston was still alive, her drug addiction was a punchline, but once she died, only the crassest among us would create a meme.)

But it’s not just famous people who get derided for being attention whores, and it makes me realize there’s more to it than just judgment. There’s also a little bit of envy. I was raised by a strict Christian mother, who imparted to me every conservative, heteronormative value that you would think a strict Christian mother would. Imagine what someone like me would have thought of a “real-life” Rihanna? When I was a teen, I couldn’t stand sexually liberated and opinionated young women, and I often confused their confidence with narcissism, because I had been socialized to believe that those girls ended up being trouble. But secretly, I was jealous of their ability to do their own thing (sneaking out, having sex, cutting class) and also of the attention they got (from boys, from other girls, from teachers) while doing it. (An interesting but unpleasant bitterness can be aroused when it seems as though doing the “wrong” thing is actually more fun than obeying the rules.) Basically, I learned that shaming those who craved attention and acted on their impulses was a necessary part of upholding my self-esteem as a woman, and the wider the distinction between myself and them, the better.

Obviously, I’ve since realized how messed up my logic was and it’s taken some serious introspection to understand why I even needed to think this way—and part of it, I’ve concluded, is that we sometimes tend to demonize what we don’t understand. I had the script flipped on me by a former friend once when I was 16 and changed my religion twice in a few months. It wasn’t a careless decision: My switch from Christianity to Islam was preceded by my locking myself away with a Malcolm X biography for days at a time, talking about his politics whenever I was with other people, and gathering information from my Muslim friends. But I wasn’t completely satisfied, so about four months later, I switched to Rastafari and started getting in touch with African arts and history. Basically, like every other teenager, I was just trying to find a place in this world, but I was deviating from the Christian background that my friends and I shared. One of them called me an attention whore. She couldn’t grasp why something as abstract as spirituality bothered me so much, and it was easier to dismiss me as just desperate for attention.

It rattles our sensibilities when people do things that we don’t understand, when they seem to need more than we do, and even the Lindsays and the Courtneys and the Kanyes—people whose very job it is to be in the public eye—cause us to distance ourselves with labels, certain that with the same fame and riches we would conduct ourselves more sensibly. But a slur says more about the user than it does about the target. Craving attention isn’t a crime, even if some of the things people do to get it are. Sometimes it’s a publicity stunt. Other times it’s a cry for help. And sometimes people are just doing their own thing, and they can’t escape the gaze of everybody else. Maybe then it would help to remind ourselves that we can always look away. ♦