A new song from + an interview with the great Scout Niblett. 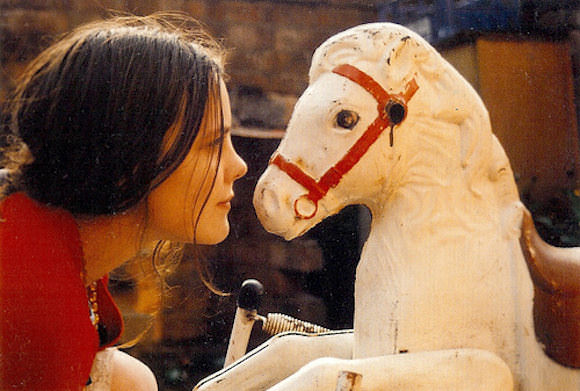 Using just her voice, a guitar, and an occasional drum, Scout Niblett will crack your heart in half. Her music is emotionally direct and powerful—she says she uses songwriting as a kind of therapy.

She’s been writing songs since she was a kid. Her new album, It’s Up to Emma (Drag City), is her sixth full-length, and it’s her best work yet. From its opening track, the righteous, ground-shaking revenge anthem “Gun,” to the soulful, forgiving “What Can I Do?” the record is a musical guide to the process of grieving.

Also included is a cover of TLC’s “No Scrubs,” which we’re premiering here today. It takes the song in a haunting new direction but loses none of the classic girl anthem’s power:

I talked to Scout Niblett a few days ago about her new album, accepting your emotions no matter how surprising, and songwriting as a portal into a fantasy world.

HAZEL: When did you first fall in love with music?

SCOUT NIBLETT: I always remember really loving music, even when I was a kid, like pop music and whatever was on the charts. But I fell in love with the idea of playing music when I had a teacher at school when I was seven or eight who played piano. She started giving me piano lessons when I was about nine. I think her love of music was kind of infectious, and I thought, I just want to be that.

Your work over the years has been compared to classic blues but also grunge, like Nirvana. What would you say are your main musical influences?

The grunge thing was huge. The early ’90s was when I was like 18, so that was my coming of age. That’s when I started playing guitar. That era was pretty potent in terms of influencing my aesthetic. I was really obviously influenced by Nirvana and Hole—I loved how raw their music was, especially the vocals. [My music] is a lot more minimal than theirs, though—I like things being a lot more simple.

Your songwriting is so powerful on its own.

It’s partly because I always write songs by myself, when I’m alone. They’re born like that, stripped down, [just] me on the drums or the guitar, and that to me is a song right there. Anything that’s added on top of that feels like extra stuff.

The song we’re premiering off the new album, your cover of “No Scrubs,” is really beautiful. What about that song resonated with you?

Well, I loved it when it came out. I just thought it was such a great song. And I accidentally heard it again on the internet recently when I clicked on someone’s Myspace page and it was their song thing. And I was like, Oh my god, I forgot how good that song was. So I started covering it in live shows. I’d use it as like a bridge between some of my older songs. But I never felt the need to record it until this album, where it just seemed to fit with everything thematically.

Your past albums have been a little more minimal than this one, where you bring in a lot more guitar, a lot more drums, even what sounds like an orchestra. What led you to go for a fuller, more complex sound this time around?

There are three songs with string arrangements on them, and that was a purposeful move. I couldn’t play those songs without hearing these other harmonies going on in my head. I’ve been working a little bit on this classical piece for a symphony, and it’s funny because it’s actually a melody I wrote when I was a kid, on the piano. It never seemed appropriate for the guitar, as a rock song or anything. I wanted to give it the sound it needs, which is like a classical sound, so I’ve been messing around with string arrangements, and so my head had been in the classical mindset while I was writing this set of songs.

The album is called It’s Up to Emma. And I know that Scout is your stage name and your real name is actually Emma. Can you explain that title a little bit?

Yeah…it’s difficult. It’s working on a lot of levels, I think. This album is the most focused and the most personally revealing I’ve ever allowed myself to be. Over the past year I have had to learn self-reliance, and [these songs] felt like I was looking at myself [during that period] from the perspective of someone who knows me really well, someone who was guiding me or something. This is what someone who knows me and knows what I went through would say to me.

In the end, though, I can’t really ever write from any perspective other than my own. Things just come out of me, pretty much, and I think it’s really my subconscious telling me what I need to look at in myself.

The opening track, “Gun,” is such a haunting song. It’s really honest and angry and about vengeance. How did it to feel to write a song like that?

Songwriting is a way for me to make sense of emotions that I’m going through, and to deal with emotions that I can’t really deal with in real life. “Gun” is about feeling betrayed. I felt betrayed at the time and I was angry about it, and I channeled it into that song. Obviously, I’m not really going to get out and get a gun. [Laughs] But when your emotions are so strong, songs become a place where you can fantasize, an unreal world you can enter. It’s like storytelling, that song, because it’s a fantasy, but it helped me see how I was actually feeling.

When you’ve created such a personal and emotional song, does it feel strange to release it to the public?

[Laughs] It is kind of weird. When you put everything of yourself into something and really allow your subconscious to come out, you’re putting yourself in a very vulnerable position. The way I deal with it is by looking at songwriting as the way I make sense of myself—it doesn’t really matter what happens [to a song] after that. This is really therapy for me. It’s something I have to do to make myself feel better. When I concentrate on that, I realize how it’s going to be perceived is completely irrelevant.

When you’re writing these songs that involve other people, do you ever imagine those people hearing them?

Not when I’m writing, no. When I’m writing it’s not a situation of me sitting down and writing a particular song about a particular subject. I’m trying to turn up what’s going on inside me. If I started to think or contemplate how this is going to be seen by others, it just wouldn’t work. I wouldn’t able to be myself. I’d be too concerned with how it would be perceived.

It seems like It’s Up To Emma starts out in a place where anger is being projected onto another person, with “Gun,” and moves into a more introspective mindset, with the last two songs, “Could This Possibly Be?” and “What Can I Do” being questions about love and the future. Do you see the album as sort of an emotional journey in a sense?

Yes. It’s a document of how emotions evolve over time. It’s the natural cycle where when something happens that you don’t like, initially you get pissed off. And then there’s this period of denial and then a period of “Why did this happen to me?” And then introspection comes in. Then hopefully there’s a resolution, where you can understand it and it’s fine. And then finally forgiveness comes in, which was important to me.

When the angry songs came through me, I was initially pretty shocked. I was disturbed by them myself. And I thought, I don’t think I can put something like that out in the world—it’s too angry! [Laughs] But you have to accept your own emotions as long as you don’t hurt anyone with them or necessarily have to act on all of them. To be able to accept the truth of how you’re responding to something and understand why you’re responding that way is really the way to heal yourself. I had to see that a situation I was in had just died, literally, and to move on. ♦