Jennifer Lawrence strikes again! And more answers to the eternal question WHAT HAPPENED ON THE INTERNET THIS WEEK?

Sunday Comic: The Best Song Ever #8

OK, so Anna Wintour and the Costume Institute of the Metropolitan Museum of Art in New York threw a huge party on Monday night where lots of movie stars tried their hardest—with varying degrees of success—to be super punk rock (punk was the theme in honor of the Met’s new punk fashion exhibit). As Vulture also observed, Jennifer Lawrence once again wins at life and going to parties because of this photobomb.

The Office has been a little bit up and down in its final episodes, but in this clip from Late Night With Jimmy Fallon that made its way around the internet this week, John Krasinski proves he’s still got it by (1) appearing to know all the words to Katy Perry’s “Teenage Dream,” (2) being a good dancer, and (3) making the Roots laugh. Well done.

Gizmodo wrote about a poster commissioned by an agency in Spain that manages a hotline for kids and teens who are experiencing abuse. The poster has two different messages. The first one is directed at adults and includes a picture of an average-looking young boy. The SECOND message shows the same boy, but beat-up and bleeding. Under this picture it says, “If somebody hurts you, phone us and we’ll help you,” with the number to the agency’s hotline. The thing about this second image/message: It’s only visible to children under the age of about 10 (or anyone shorter than 4 feet, 5 inches), based on some kind of craaaazy technology that alters a picture depending on which angle you see it from. I CANNOT STOP WATCHING THIS VIDEO and turning it over and over in my head. What a great idea! What if there were MORE ways to empower children experiencing abuse (instead of trusting adults to “notice signs” and report suspicions)? How could we help, say, even younger kids or ones who otherwise don’t fit the “under-10-and-reads-well” demographic? What about for teens? What about for kids experiencing abuse with no outward physical signs, like sexual abuse, for instance? How could we send secret messages to THEM? AGGGH, THIS IS BRILLIANT. 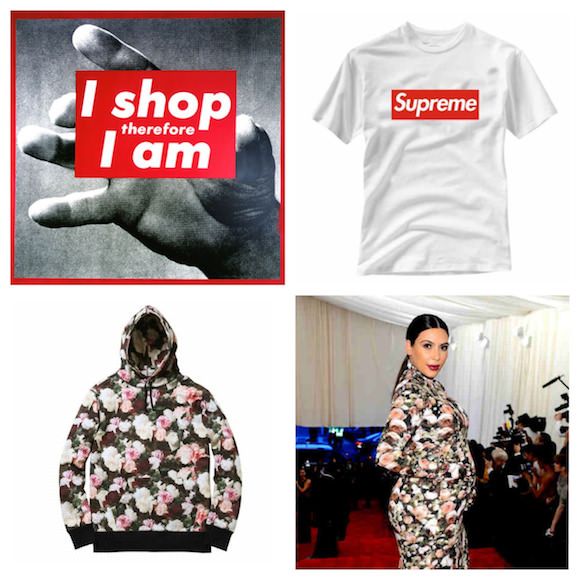 Clockwise from top left: Barbara Kruger, “Untitled (I shop therefore I am)”; A T-shirt with the Supreme logo; Kim Kardashian at the Met Gala; Supreme’s “Power, Corruption, Lies” hoodie.

The popular skate and streetwear label Supreme openly cribs other people’s ideas and art for their garments—starting with their logo, which is a play on the typography of the feminist conceptual artist Barbara Kruger. Yet they’ve registered a copyright infringement lawsuit against fellow streetwear label Married to the Mob for printing shirts that say “Supreme Bitch” in the same font as the Supreme logo, which is the font that Supreme “borrowed” from Barbara Kruger’s artwork in the first place. Millions of dollars are at stake, and Married to the Mob has procured a powerful attorney. Yet in the entirety of Supreme’s almost 20-year existence, Kruger herself had never publicly discussed the blatant rip-off of her font—until last week. Complex contacted her for a comment on Supreme’s lawsuit, and she gave the best statement imaginable, via an attachment which appears to be a screenshot of a Word document: 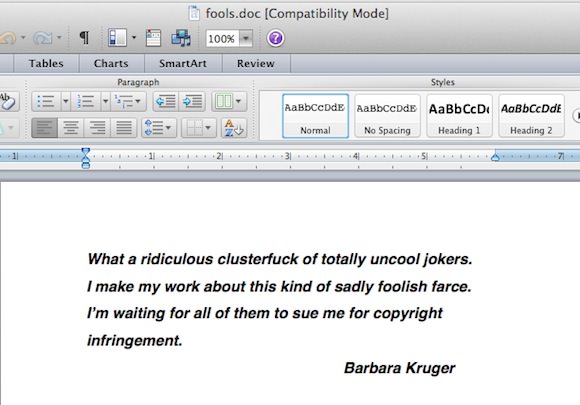 BURN! And in related news, the amazing dress Givenchy’s Riccardo Tisci designed for Kim Kardashian to wear to this week’s Met Gala appears to be a rip-off of Supreme ripping off New Order ripping off Henri Fantin-Latour. So technically, Kim’s dress (which I loved) was very 1890s.

OK Go made a video game and it’s really fun and look how cute Damian and Tim are in the commercial!

Hazel
“Writing the Next Great American Woman’s Novel,” the latest installment of the Rumpus’s “Funny Women” column, is an absolutely hilarious, biting piece by editor Elissa Bassist. It’s a perfect commentary against the Wikipedia scandal (it’s a scandal to us ladies, you see) in which Wikipedia was moving women writers from the “American Novelists” page and putting them in their own super, EXTRA-SPECIAL page titled “American Women Novelists.” ’Cause novels written by women are just different, I guess, from novels written by men. Bassist’s satire kills it (example: “I was immersing myself in women’s literature the other day—and by that I mean I was reading a cookbook…”) and gets at the heart of this controversy in the wittiest way possible. 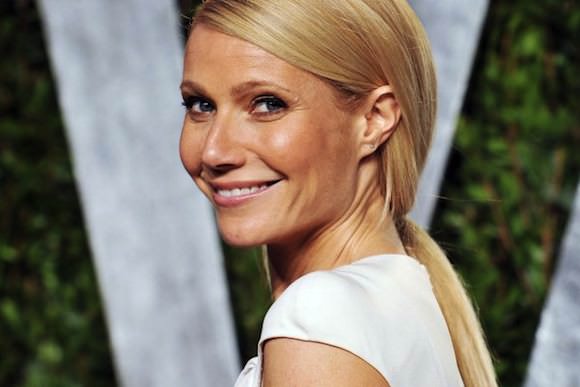 This article, in which a writer from the Cut tries out a weeklong “detox” from Gwyneth Paltrow’s new cookbook, It’s All Good, made me feel very…funny. The diet that Paltrow advocates—eating only foods like quail eggs, raw almonds, and freshwater fish that don’t “ruin lives” and that supposedly will make you feel good in belly and soul—is basically what all the feral, anti-agrarian anarchist hippie kids ate at the commune where I used to live. On the commune, the lists of what people would not eat were endless: no gluten, no sugar, no tomatoes, no nightshades, no GMOs, no garlic, no onions (people thought they were a “third-eye blocker”), no oats, no spices (only pink Himalayan sea salt), no starch, no oats, et cetera, et cetera. OK foods included lots of raw honey, soaked almonds, fish, beets, turnips, carrots, and desserts of goopy consistencies made of sunflower seeds, coconut oil, and cacao. (Road-kill deer and squirrels were also on the menu, but I doubt Gwyneth partakes of such delicacies.) The article says that one problem with the It’s All Good detox—aside from how restrictive it is—is that it’s hideously expensive. Raw honey, for example, can run you 11 bucks a jar. The commune handled expenses with thousands of dollars’ worth of food stamps each month, plus a lot of “food liberation,” which involved meticulously planned shoplifting excursions. The article made me laugh, but it also left me with a belly- and soul-ache, honestly. The idea that I ran from New York to a place deep in the woods to soul-search and ended up eating the same diet as Gwyneth Paltrow—who went to an uberfancy Upper East Side private school (exactly the kind of upbringing I was trying to escape)—is ironic, maybe, and makes my insides feel like crap. 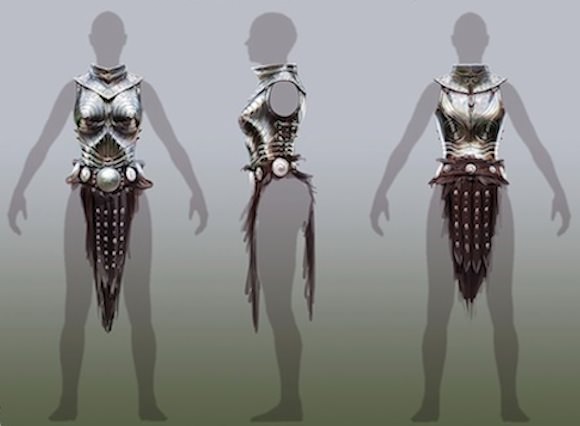 If you’ve ever played a video game or watched a fantasy TV show or movie, you’ve probably seen it: boob-plate armor. Breast-shaped chest armor seems to be fantasy’s compromise for the protective bikinis often seen on warrior babes. Sexy, but protective, right? Wrong. It turns out that boob-plates are not only kind of sexist but also (theoretically) suck at being armor. The sci-fi/fantasy publisher Tor’s website lays it out straight: Boob-plate armor kills. Not only would it guide a sword right to the sternum, but if a lady happened to fall on her face, the armor itself might do her in. It’s time for the rest of the fantasy world to follow the lead of Brienne of Tarth, who looks AWESOME in her totally respectable flat-chested armor. 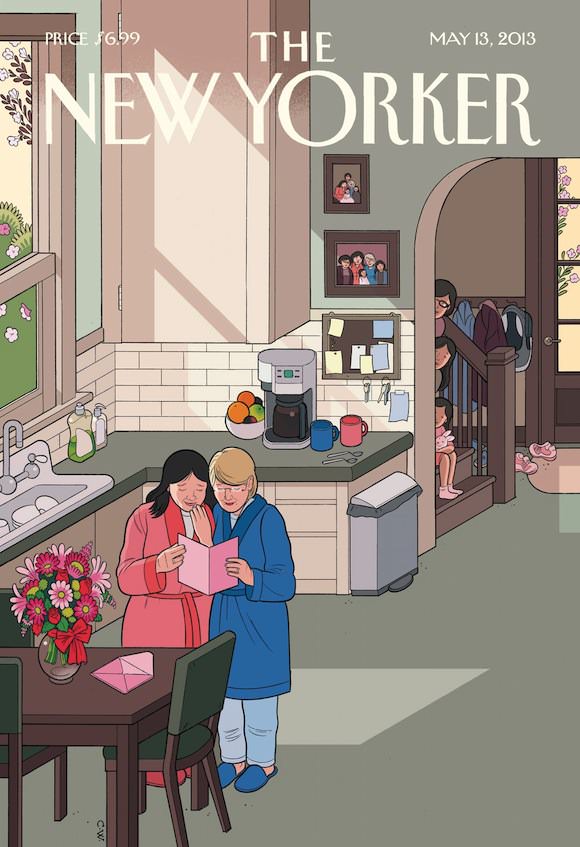 This New Yorker cover by Chris Ware, which hit newsstands this week, shows two moms celebrating Mother’s Day and their children spying on them all happy and excited. I love. ♦