Janelle Monáe and Erykah Badu are the queens of our pop dreams. PLUS: The latest news in #adults!

Janelle Monáe—who is doubtlessly pop’s highest-concept, freakiest, and funkiest right now—returned this week with “Q.U.E.E.N.,” the video for her new single with ERYKAH BADU. It is proof that dreams do come true. There are few things as satisfying as when super-power women combine forces, especially when the media constantly goads the false notion that there can only be One Successful Woman who is the “queen” of a genre. It creates this illusion of a cat fight-y hierarchy, where every diva is clawing her way up to replace Beyoncé. But anyhow, Monáe’s “Q.U.E.E.N” covers so many girl-power bases, all while she stomps around in a ruffled, high-neck blouse and tells us she isn’t paying attention to what anyone else thinks; she isn’t asking permission to live. In the song, Monáe, who says she was inspired by discussions she had with Badu to write it, asks “Am I a freak?” for admiring other girls. People have speculated that she could be broaching the issue of her sexuality, which she’s been mum about aside from admitting she knows what it’s like to be an outsider. Like in the video, for instance, when she sings, “Hey sister am I good enough for your heaven?/ Say will your God accept me in my black and white?/ Will he approve the way I’m made/ Or should I reprogram the programming?” BOOM. Love it, whatever she means, and it is right on time. P.S. Hit pause at 4:56 for an inspiring sorta-secret message that shows that Monáe is interested in being much more than a pop star. 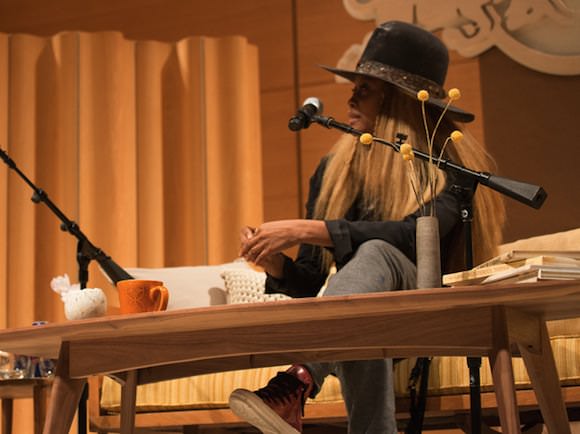 This week, Erykah Badu also hit the Brooklyn Museum for a live, Inside the Actors Studio-style Q&A. In a conversation with Jeff “Chairman” Mao (a founding editor of the legendary hip-hop zine Ego Trip), Ms. “On and On” Badu addressed topics spanning her career, from starting out as a musician to her side job delivering babies (Erykah Badoula!) to how scary it was undressing in the Dallas streets for her symbolic, powerful “Window Seat” video. This review of the talk by NPR’s Frannie Kelley is not only a good overview of what Badu discussed, but also reminds us why she is so beloved. “As a public figure, she promises that being kind of weird doesn’t mean you’ll be cast out,” writes Kelley. “She explicitly said that on Tuesday: ‘Don’t live anybody else’s dreams but yours. And two wrongs don’t make a right, but it’ll damn sure get your money.'” She’s a goddess, but one with flaws she’s okay with letting us see, which turnes her into a living deity among her fans. Appropriately, Kelley’s article is entitled, “A Night of Worship in the Church of Badu.” 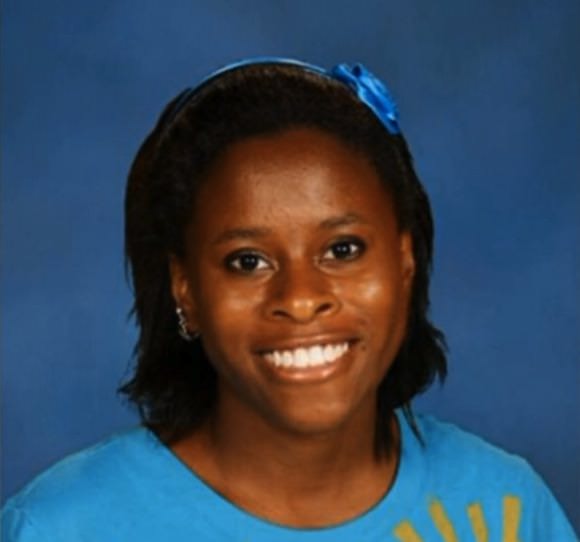 Last week Kiera Wilmot, the 16-year-old gal from Florida with good grades and a flawless behavior record who’s pictured here, was arrested, expelled from her high school, and threatened with two felony charges. Why? For doing a science experiment. On school grounds. She mixed toilet-bowl cleaner and aluminum foil in a water bottle; the concoction exploded, and the bottle top popped off. There was some smoke, but nothing was damaged and no one was hurt. Practically everyone involved, including her principal, acknowledges that she didn’t have bad intentions. Nonetheless, Wilmot now faces the real possibility of being tried as an adult for possession/discharge of a weapon on school property and discharging a destructive device.

When I read about Wilmot’s case, my reaction was pure What the hell? The story is too absurd for me to even make sense of it. Messing with a girl’s education and life simply because her experiment was a little sloppy? I could understand if she was given detention, or even suspended, but. . . arrested? Expelled? Really? I still can’t wrap my head around it, but I found two articles that were somewhat helpful in putting it all into perspective.

In the first, Tiffany Madison at the Washington Times asks how “this nation’s schools [have] become such mindless, bureaucratic prisons” and why “school administrators no longer [serve] their community and their students, but [lord] over schools like wardens.” She also wonders how teachers are going to be able to educate and inspire their students: “If this is the punishment for experimentation, how can we expect the current educational paradigm to produce more Ben Franklins, or Nikola Teslas?”

And at Feministing, Sesali Bowen wrote that Wilmot’s case is about setting an example, even while it comes at her expense: “This was about…sending a message that even (mis)perceived threats will be dealt with swiftly and harshly. The unfortunate truth is that in America, those perceptions are heavily tied up in notions of race, class, and gender…. Zero-tolerance policies are not about keeping schools safe. They exist to keep school administrators from being held accountable for the environment they create in their institution[s] and making contextual judgment calls.”

I really, really hope that our education system isn’t as horrendously bureaucratic and idiotic and racist as these articles suggest. I hope that Wilmot’s case was a fluke rather than a sign pointing toward a trend, although honestly, I don’t believe much in flukes. Well, happy Saturday. I’m going to sign this petition for the charges against Wilmot to be dropped. There’s a similar campaign on Twitter—just search for the #FreeKiera hashtag.

Speaking of hashtags, about a month or so ago, I saw that a bunch of adults I follow on Twitter were doing this thing called “Follow a Teen.” Each of them was following a random teenager’s tweets, then reporting on what that teen said in their own tweets with the hashtag #followateen. Earlier this week, Helena Fitzgerald wrote an essay at the New Inquiry about how she thought this whole thing was creepy. Some Rookie writers and I also had been thinking about how it was pretty weird (and sort of mocking teens), so I decided to tweet about what some adults were doing with a #followanadult hashtag. Tavi joined in, and then yesterday Rookie made it official: #followanadult was ON. Teens were tweeting about how their “adults” were doing things like trying to figure out how many “points” were in a brownie, playing golf, and having “no hope for America.” This, of course, was extremely hilarious. A bunch of news outlets like Atlantic Wire and Gawker took notice and declared it a “Twitter War,” but really, we weren’t tryin’ to start a fight. #followanadult was just poking fun at #followateen, and we’re not bitter, we swear! People say #followateen also was created as a joke, and one that points out how “boring” and/or “stupid” teens’ tweets can be. Our little experiment has proven that adults sometimes tweet things that are just as dumb, if not more so. The moral of the story: teenagers rule the internet. The OTHER moral of the story: everyone sounds dumb on Twitter. :) 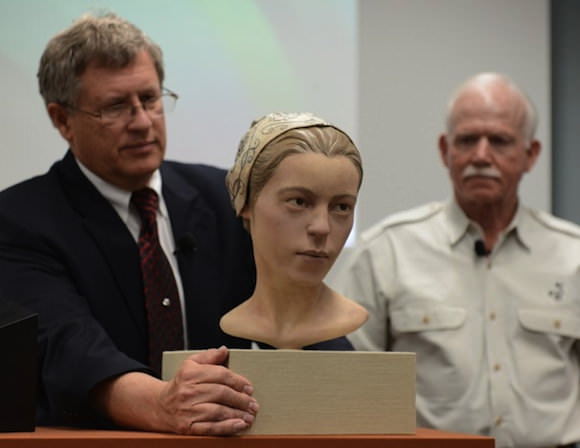 In other teen news this week, archaeologists found the bones of a 14-year-old girl they’re calling Jane, who they believe was killed and eaten in Jamestown, Virginia. The discovery confirms the many accounts of cannibalism in the colony during the early 17th century. Her skeletal remains are a unique find, and this is all very interesting and completely terrifying (American history is so fucked up), but what I find most insane about this whole story is the fact that archaeologists RECREATED THE GIRL’S HEAD. What in the world does this add to the investigation? And why with such a haunting look on her face?! I want to know more about the choices behind this. With only her bones to go on, how could they even know what she looked like? Why did they give her eyes that eerily disapproving look? I’m obsessed with the image of this girl, and I wish I knew more about her. I just can’t get over her face. 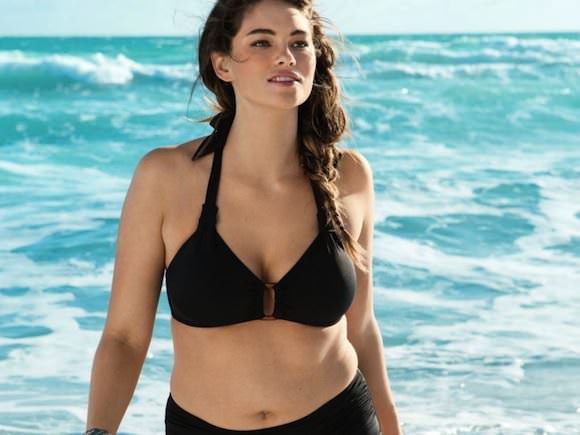 The retail giant H&M launched a 2013 beachwear collection this week that was accompanied by photos of the model Jennie Runk, like the one above. I wouldn’t have even known about any of this if it weren’t for the explosion of blog posts about how Runk is a plus-size model. Ten points to H&M for just casually publishing the beautiful shoot on their website without patting themselves on the back for breaking fashion norms, which Jezebel also gave them props for earlier this week. And a kick in the ass to all the unhealthy “excitement.” Also, is a girl like Runk really plus-sized, internet? I’d say she’s average, but, then again, that word doesn’t do her beauty any justice.

Icona Pop killed it this week on Jimmy Fallon; nobody is surprised. They slowly went from playing it super cool and being all, “I don’t care,” to jumping and dancing and smiling and being all, “I love it.” Love love love. 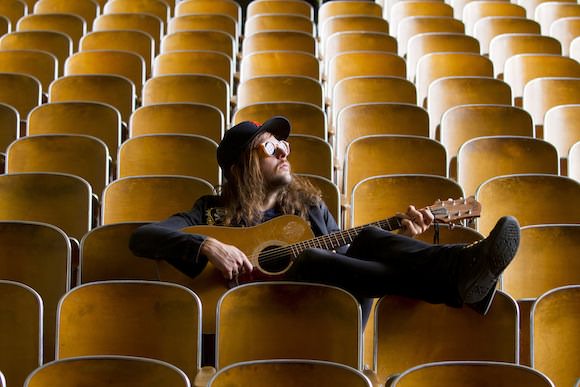 On May 6, Adult Swim is putting out a free and pretty sweet compilation called Garage Swim. Yesterday, the Fader posted a pre-released track from the comp that happens to be collab between our buddy King Tuff, above, and the band Gap Dream. It sounds like asphalt melting—I couldn’t have dreamed of a better jam to warp my mind in the California heat or kick off summer daze. (School’s out next week, high five!) 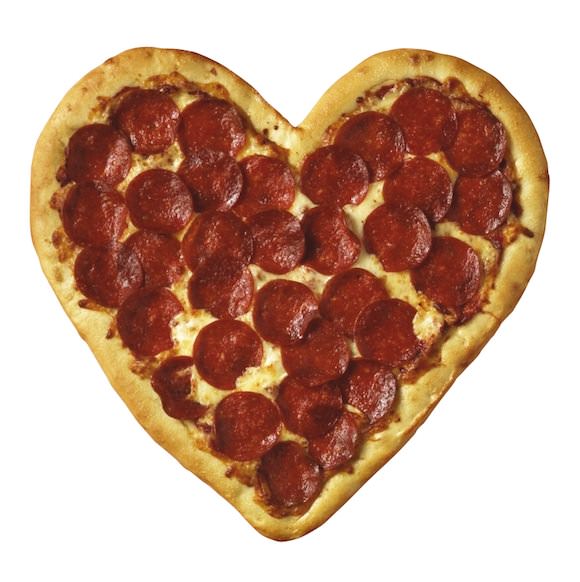 Aside from being one of the most affordable and delicious of meals, pizza may help fight cancer, according to studies in Italy. I’ve never regretted eating pizza (except maybe that one time a slice made me sick because of its questionable freshness), but I will now do it for my health. Thank you, science! ♦