Another round of pancakes in the wee hours with strangers. 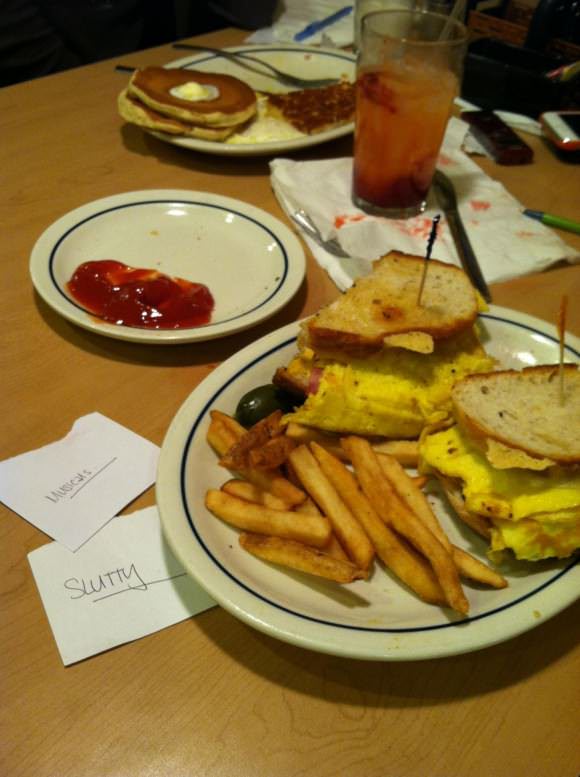 What’s the perfect way to end a night spent hanging out with your friends? Eating tons of delicious breakfast food, doye! With this life truth in mind, I traveled with three other intrepid Rookie staffers, Gabby, Lola, and Anaheed, to an IHOP in the East Village to do a part two to this article from last year, where we interviewed a bunch of teenagers who were out between midnight and 6 AM to see what they were up to. This year we hit the pancake paradise on two different nights: March 29 and April 20 (aka 4/20 aka Christmas for potheads). We met tons of really awesome people on our adventures, and some incredibly wacked-out ones.

This time around we wanted to mix it up a little, so we decided to pay loving homage to The Newlywed Game with our interviewees. Basically, the game show asked new couples to answer questions about each other to see just how truly they ~got~ each other, often to hilarious (and/or disastrous) effect. We did the same thing with the couples we met, and with groups we had them pick one person to all answer questions about. The guessers wrote their answers on slips of paper, which they showed us after the subject revealed the truth about themselves. It turned out that even when people didn’t quite know what their friends’ celebrity crush might be, or what they want to do when they grow up, they often came up with something even better. And not even one person got mad about it when his or her friends were wrong, because it’s scientifically impossible to experience negative emotions when you have a waffle with whipped cream on it in front of you. And also? There’s no better setting to get to know your friends more intimately than a breakfast joint at 3 AM. Here’s everything they, and we, learned. —Amy Rose

ANAHEED Are you guys boyfriend/girlfriend?

ANAHEED How long have you been together?

WELLS For a while—four months.

ANAHEED How did you meet?

WELLS We met at a club social at NYU.

ANAHEED What club was it?

SUSANNA It was some Asian club.

WELLS I wasn’t really in the club, but my friend brought me to their social because there was free food. And she was there. We were playing club games, and we were on the same team, and we kind of bonded over that.

AMY ROSE Were you both good at it?

AMY ROSE Yeah you did! Are you ready to play this game?

ANAHEED Susanna, if you were to picture all of the things that Wells spends his time thinking about as a pie chart, what would be the biggest slice of the pie? Write down your answer.

AMY ROSE Write it down and DON’T LOOK. Wells, why are you trying to cheat? I’ve got my eye on you.

ANAHEED OK, what do you think about the most?

WELLS I hope she said philosophy, but I’m not sure.

ANAHEED What does that mean?

WELLS Philosophy of mind is studying, like, who we are, what makes us think, you know—is our mind just our brain, or is it some other entity? You know how you hear stories of people who get amnesia and they don’t know who they are? Like, is that the same person as the original person?

AMY ROSE I don’t know any people with amnesia like that.

SUSANNA I don’t know anyone with amnesia, actually…

AMY ROSE It seems like it only happens on soap operas.

AMY ROSE Now, Wells, please write down everything you think Susanna is planning to do tomorrow.

SUSANNA Um, he probably thinks I’m going to do some PCT activity—that’s my frat. Then probably I’m gonna sleep. Did you write sleep? Or homework. I’m trying to write an essay, I think.

WHAT WELLS WROTE PCT, essay, hang out with me
Wells: 1 | Susanna: 1

AMY ROSE Awww! Though he put “hang out with me,” which you didn’t say…

ANAHEED Wait, you’re in a frat?

ANAHEED Susanna, which cartoon character would Wells say is most like you?

SUSANNA You know this.

WELLS I know what you’re talking about, but that’s not a cartoon character, and it’s not the kind of person you are. [To us] She’s gonna say Batman, OK?

ANAHEED Oh my god. How did you know that?

WELLS She worships Batman. The day we met she wanted me to get into the Robin costume.

SUSANNA I wanted you to be Selina Kyle, actually.

AMY ROSE Why wouldn’t you be Catwoman?

WELLS Well, I mean she’s nice and all, but… [Laughs] So what happened was…do you have that picture?

WELLS So last week was the Google Games…

WELLS Google Games is a competition where you solve a bunch of puzzles and trivia. The theme last week was superheroes, and our group dressed up as Teen Titans, and she always wanted me in a Robin costume.

[Susanna shows us this picture on her phone:] 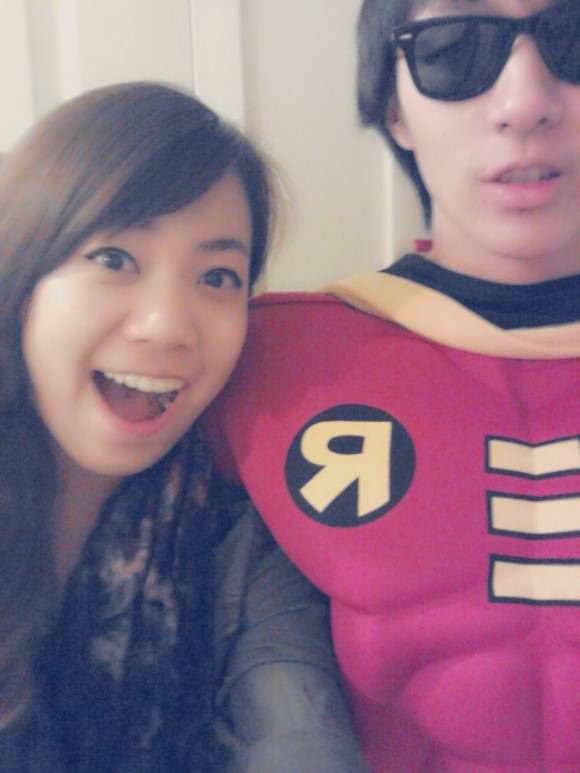 AMY ROSE That is the cutest thing.

ANAHEED I’m going to press forward and put my email address in, is that all right?

AMY ROSE Wells, what does your tattoo say?

ANAHEED What does it mean?

WELLS She can explain.

SUSANNA It means nothing comes from nothingness, and nothingness returns to nothingness. And basically I think it’s about…there’s this whole philosophy thing about it.

WELLS When I explain it to engineers the first thing they think is Oh, that’s the first law of thermodynamics. The first law of thermo is conservation of mass and energy: You can’t destroy mass, you can’t create mass or energy. So it’s like, nothing comes from nothing—you can’t just make things. And nothing goes back to nothing—you can’t destroy anything. But it’s also like a life mantra for me. “Nothing comes from nothing”: you can’t just sit there and suddenly you get a job or great things happen to you.

AMY ROSE You have to act and move and be in the world.

WELLS You have to do hard work. But at the same time, if you do hard work, it’s not all wasted. So nothing returns to nothing: you still get something from it.

AMY ROSE That is optimistic.

WELLS Yeah, you might think with all the nothings it would be very dark, but it’s the opposite.

AMY ROSE So, um…whose turn is it?

WELLS I’m pretty sure it’s my turn. I’m so bad at this.

SUSANNA’S I burp too much? 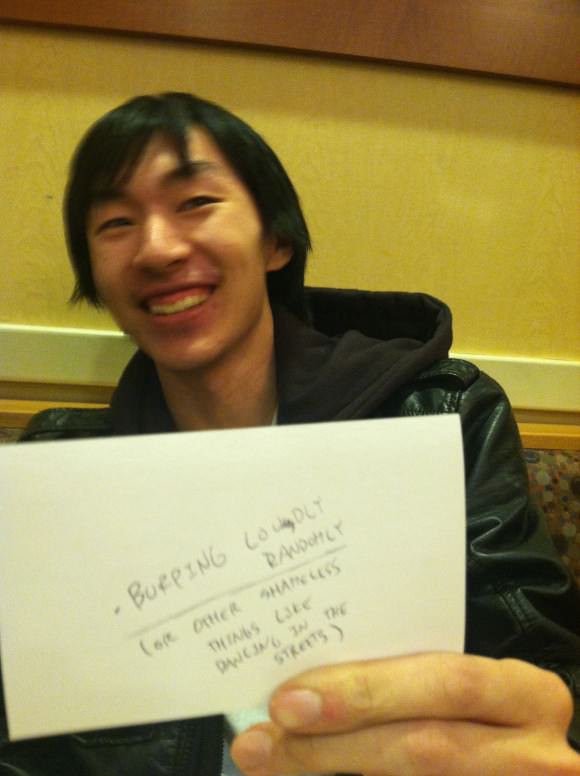 ANAHEED Oh my god! You guys should get married.

WELLS Don’t say the other one. The shameless one.

WELLS No, what’s a really silly thing that we always do every time we go out and we’re being really silly and random. We probably did it on the way here.

SUSANNA Dancing in the street?

ANAHEED That’s not a vice!

AMY ROSE He described it as shameless, which I love. So far you guys have gotten everything right.

WELLS This is fun.

SUSANNA This is really fun.

ANAHEED Which one of you liked the other one first?

WELLS It’s a tough decision, but it was probably me.

AMY ROSE So wait, tell us the story.

WELLS Well, when I moved here for school I was single and I was just like, “I have to get a girlfriend!” So I came to these social events to meet girls.

ANAHEED Did you notice Susanna from across the room?

WELLS Yeah. That’s how I describe it, actually.

AMY ROSE What was your first impression of her?

SUSANNA “She was really weird…”

WELLS Oh my god, no, stop. She always thinks that. I just remember that she was really sociable, really enthusiastic. She still is. She has all this energy, you know?

AMY ROSE You’re the kind of girl who dances in the streets, man—that’s just how you are!

ANAHEED What is the dance that you do in the streets?

SUSANNA Have you guys ever heard of “Dancing in the Street”? It’s by Mick Jagger and David Bowie, it’s a music video.

ANAHEED I am an old person, so I am well aware of it.

SUSANNA It was just so funny, so I showed him, and it’s been like a running joke.

AMY ROSE Wait, do a little bit of it, pleeeeassse..

WELLS What do we even do?

WELLS And spins. And just they kind of like wave their arms around, and…are you recording this?

SUSANNA Are you recording this?

AMY ROSE That was the best thing. I’m in love. Guys, thank you so much.

WELLS That was really fun. Yeah. So it’s been a crazy four months. Things just like clicked, you know? It was a really storybook-romance type thing.

SUSANNA Isn’t this how it’s supposed to go?

WELLS OK, so I’m her first boyfriend. I’ve had 10 girlfriends before, so I…

ANAHEED How come you hadn’t been in a relationship, Susanna? Did you just not want to?

SUSANNA I just never found anybody. This would have been in high school, and my mom was super protective.

ANAHEED Was Wells your first kiss?

ANAHEED What? You were going out with 10 girls!

AMY ROSE How scandalous could it be if you weren’t kissing?

WELLS Well backwards, going around the diamond, if you catch my drift.

ANAHEED Why did you not kiss if you were doing those other things?

WELLS Well, like somehow you did other things, but…you know, you want to preserve your first kiss, because somehow that’s like your childhood innocence.

ANAHEED Did it go all right?

AMY ROSE Well, what did you use? I was just like “Hey, this is gonna be a normal kiss, right?” and then it was like BAM.

ANAHEED [To Susanna] Did you know what you were doing—like, had you thought about your technique, or were you just winging it?

SUSANNA I was winging it.

ANAHEED You guys are the best. I hope you have the cutest, sexiest nerd babies.

SUSANNA Yeah, we’ll figure it out.

Winner: Susanna, but only because she got an extra turn. The real winners: both of them, and us, and LOVE.