My not-so-successful adventures with astral projection, good vibrations, and Being Here Now. 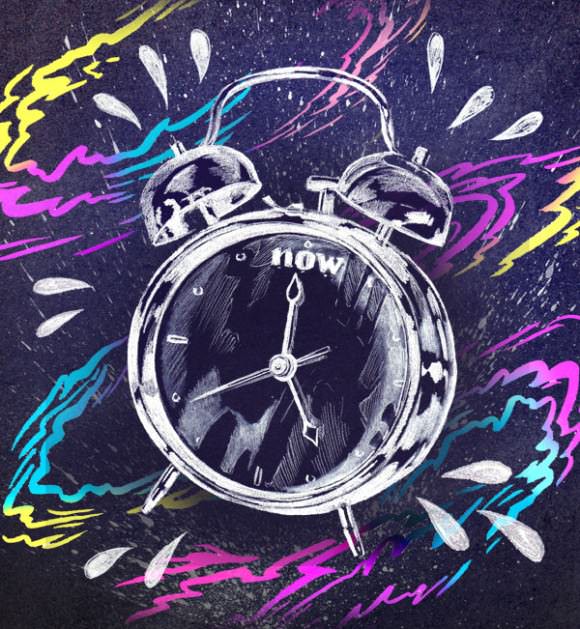 Last year I visited a spiritual commune in the Sonoran Desert. The people there were super into VIBRATIONS—by which they meant exploding your ego and reaching higher dimensions and communicating with higher-dimensional beings, all through meditation. The experience was intense, to put it lightly. I gained a lot from it. (I also threw a lot away.) The best thing I learned was how to see life as an act of constant meditation by keeping your senses attuned to your immediate surroundings and being hyperaware of the present moment, the ETERNAL NOW (a big catchphrase on the commune). I haven’t decided whether I think this is a good way to walk through life all the time—like an animal, just constantly focused on the NOW. OK, I don’t think it’s a good way, at least not for me—but it was certainly a fun thing to do while traveling and writing, and it’s good exercise for your attention span.

What follows is an account of my time in Arizona and what I learned, interspersed with journal entries I wrote while I was there, living and writing in the Eternal Now.

(An apology in advance: In this piece I allude to Eastern philosophies that I have immense love and respect for. I did not meditate or seek to reach spiritual enlightenment in a serious way: This article is about my goofy experimentation with “being in the now” and is not meant to make light of serious spiritual practices.)

Now imagine the silence—all that silence—between the space between infinity and yourself.

(The chorus repeats. Cycles through the second joint, the third joint.)

“Lynne,” I said. “Is it true that for this New Age to come in, two thirds of the population will have to die?”

“Listen,” Lynne said. “You can get so caught up in that stuff, those prophecies. Putting out that negative energy. It’s true there’s going to be a lot of galactic movement this year. With that movement, there’s a lot of energy, and with that energy, with all that energy, there’s power. Power, movement. Floods, earthquakes… But all those galaxies—you’ve got to think—all those galaxies will be there with us, supporting us, smiling down at us….” As she spoke she smiled at me kindly and poured her soul through her eyes and spilled them into mine, pouring her soul kindly down my throat.

This was the first commune that my then-boyfriend, Nigh, and I visited last year. The folks there devoted their days to meditation—or, to be more exact, to heralding the New Age by vibrating at high levels and attempting to communicate with higher-­vibrational beings. The de facto head of the commune welcomed us by handing us a DVD about the Global Domination Agenda; the kitchen walls were covered in photographs of crop circles.

Initially, I wanted out. But we decided to stay for a few weeks, why not? In an effort to preserve my sanity—so that I would not spend all my time there snarling judgmentally at my hosts but might instead learn something from them—I decided to suspend disbelief and just be swallowed up by their theories. I played that funny balancing act of believing in something wholeheartedly while knowing somewhere deep inside that I would eventually stop believing. I watched the Global Domination Agenda DVD and took notes. I danced the Universal Dance. I looked my dance partners deep in the eyes and bowed and told them they were a flower, a flower. I was swept up.

BECAUSE WHAT IS EARTH EXCEPT SPACE. VIBRATIONS. AND WHAT DID WE COME FROM EXCEPT THE BIG BANG WHICH IS WHAT? WHICH IS AN ATOM WE CAME FROM AN ATOM NOTHING EXCEPT FOR AN INFINITE AMOUNT OF EMPTY SPACE, AND US. HAVE YOU IMAGINED WHAT IT IS LIKE TO HAVE YER EGO EXPLODE. YOU CAN ONLY IMAGINE. IMAGINE: BECAUSE IT’LL ALWAYS BE AN ILLUSION WHEN YER DOING IT AND AS SOON AS YOU DO IT YOU’LL FALL BACK TO OUR EARTHLY VIBRATIONS WE ARE VIBRATING AT A FREQUENCY THAT ONLY WE CAN UNDERSTAND.

1. Everything is energy: everything consumes and shits out energy

3. We exist on one dimension; there exist others: THESE OTHER DIMENSIONS ARE ACCESSIBLE THROUGH VIBRATIONS. If we could VIBRATE at different levels we’d be able to “do things” that are not HUMANLY possible:

IF THERE AREN’T ANY GALACTIC CATASTROPHES BETWEEN NOW AND THE NEW YEAR I’LL BITE MY TONGUE. BUT TILL THEN: I’M SENDING OUT THE GOOD VIBRATIONS. [2. Before I went to the commune, I did not realize the weightiness of the term GOOD VIBES. I thought GOOD VIBES meant having a good attitude. GOOD VIBES means all that but there’s also this idea that by exuding Good Vibes one can literally raise the consciousness level of the earth which, if you’re trying to bring in an age of higher spiritual consciousness is Very Good.]

I can’t talk about being in the Now without showing pages from Be Here Now, a gorgeous and mind­blowing book from 1971 by the Harvard psychiatrist turned spiritual guru Baba Ram Dass. I read these pages over and over. 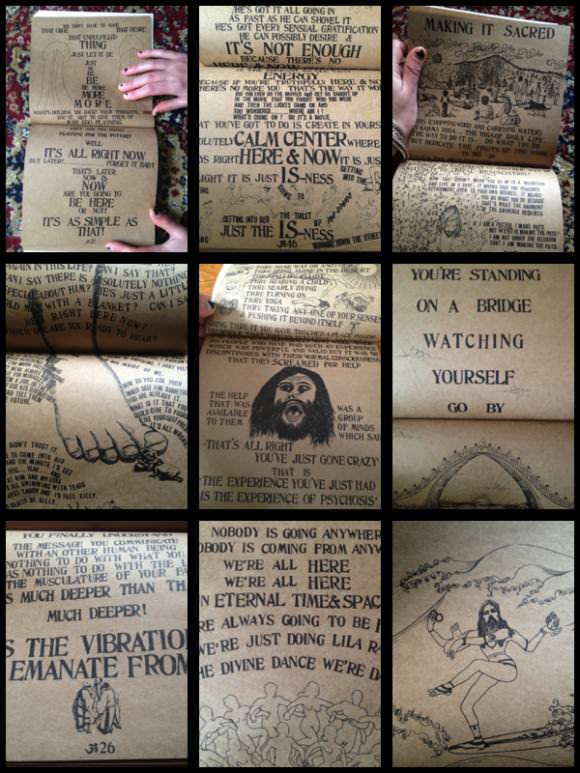 I continued to play that tricky act of believing wholeheartedly while knowing (somewhere) that my belief was apt to change. Nigh and I consulted Ram Dass daily, but I knew that someday I’d stop treating Be Here Now as a bible. Someday I would believe less.

There was something irresponsible about my method. I was trying on masks, dabbling in faiths. I knew that I was engaging in something fishy at the time, but I could not (and still can’t) put my finger on why or exactly what that was. Plus, I really was swept up: the “tricky” part about living my life as an experiment, a game, is that it was still my life, and I was still living it. It was fun. Beautiful.