It took me a long time to realize that included me.

In a Different Light 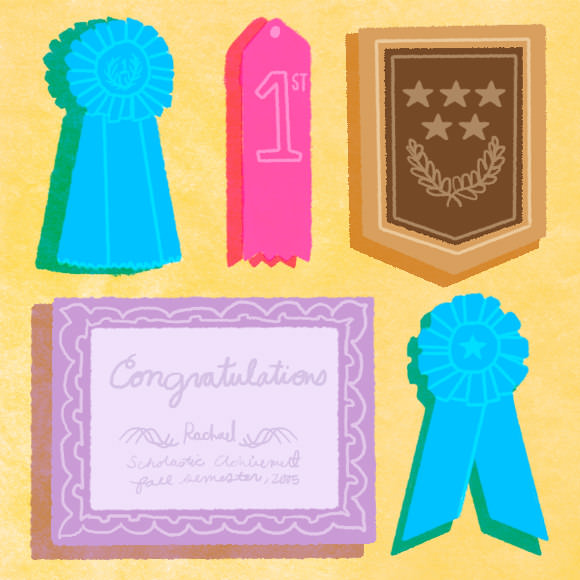 When I was younger, I could go hungry at a restaurant because I was scared to give the cashier my order, and then a few hours later, I would be on stage at my weekly drama class, strutting my stuff with my performing arts pals. My hand would often be the first to shoot up in the classroom, but I once burst into tears when I had to read an essay of mine aloud. I baffled my parents and my friends—the drama kids couldn’t figure out why I turned into a wallflower offstage, and everyone else in my life didn’t know what to make of me when I wasn’t acting shy.

To put it simply, I was TERRIFIED of negative attention. I’d rather freeze up and not do anything at all than say the wrong thing and be criticized for it. At the same time, I was hungry for praise, and I structured my life around getting a lot of it. I was good in school, so I spoke up in class and took every extracurricular that I had room for. Teachers loved me and I won academic awards left and right. Drama allowed me to express myself without having to come up with my own words, and as long as I worked really hard to please the director, I couldn’t go wrong—at least not until I left school. My community-theater dreams were shattered by three failed auditions, and afterwards I stuck to classes and clubs, where I was always guaranteed parts.

This anxiety didn’t end in the classroom. I’m a naturally shy person, and I used to want all my interactions to go perfectly, so I practically wrote them out in advance, always terrified that the other person would go off-script and force me to think on my feet. If I was ordering food, for example, I’d expect the waitress to ask what I wanted, I’d tell her, then she would leave. If she unexpectedly asked me what toppings or sides I wanted with my burger, I was rattled and took WAY too long to decide. Or, worse, she might be chatty and ask a completely unrelated question about my day, and now my whole narrative was off and I wouldn’t know how to answer. Do I just say “good” or do I give a full rundown, and then how do I segue back to my order, and oh no, I’m taking too long to answer and I look like an idiot, WHY DOES THIS HAVE TO HAPPEN TO ME? Basically, even the prospect of feeling awkward counted as negative attention, which made me more awkward, because now I was this creepy quiet girl who would turn into stone when asked to do ordinary things like order a hamburger.

I can’t tell you how many times my parents cajoled me into doing something I didn’t want to do, like cash a check at the bank, and then I’d make a tiny little mistake, like writing down my routing number instead of my account number, and I’d stutter a little bit but pretend to laugh it off even though I was dying inside, because I’d made a stupid mistake and now that teller was thinking that I was a dumb teenager who didn’t know how banking works. I’d get outside and yell at my parents “DID YOU SEE WHAT HAPPENED? You made me do this and it all went wrong and don’t you feel terrible?” And they’d just shake their heads wondering where they went wrong raising me.

In those cases, my social anxiety was extreme and noticeable, but I think the more damaging stress I dealt with is something that many, many people experience: I was working so hard to be perfect that I took any sort of reprimand or critique or social misstep as a judgment on my character.

As you can imagine, school was a minefield. When I was six or seven, I once got caught climbing a tree on the playground, and I’ll never forget how sick I felt after my teacher yelled at me to get down. It was like I’d done something very, very wrong and it could never be rectified. I couldn’t understand why all my friends, who’d also gotten scolded, were able to happily play somewhere else—it took me all day to get over it.

In high school, I wanted to get good marks on all my assignments, because being an honors student earned me the praise I desired, but also because when I didn’t live up to my high standards, I’d be crushed. Math was my weak point, and the few Cs that made it onto my report cards stood out as black marks that would forever paint me as a failure. Even constructive criticism could shake me up, like the note I once got on a creative writing assignment to come up with a “punchier ending.” The teacher loved the piece, but the ending was mediocre and now that I was aware of it, I felt terrible for turning in that piece of crap.

That same sick feeling I got as a kid after climbing that tree was triggered any time I did something wrong, like accidently hurt someone’s feelings or make a mistake at work. A gentle reprimand—“you did this incorrectly, please fix it, and don’t do it again”—sounded to me like someone screaming at me. I once forgot to return a book I’d borrowed from school before summer break, and I’m not exaggerating at all when I say it took me about EIGHT YEARS to be able to hear the name Nancy Drew without feeling shame. I was certain that the teacher who lost it harbored a grudge against me, so I hid the book in my room and spent the next decade or so fighting random spikes of anxiety whenever I thought about it.

After high school, criticism becomes even more common, while praise is harder to come by. College professors don’t get excited just because you understand the coursework, and your manager at the big box store you’re working at on weekends probably won’t even notice you unless you screw up. It was a big change, and it forced me to make an important adjustment: I had to start looking to myself for encouragement. Was this essay/poster/poem something I could be proud of? Did I do the best I could? Did I have fun doing it? I started doing photography as a hobby, just so I could look at all my pretty pictures, and spent ridiculous amounts of time on projects that had no purpose except for the fun of creating them, like the time I started making wall art out of old sticky notes. And this was surprisingly easy—it turned out that pride in yourself for hard work feels just as good as praise from another person.

Learning to deal with criticism, on the other hand, was much harder. My constant fear of failure was starting to interfere with my schoolwork, because I’d procrastinate to stave off the possibility of not excelling, and then I’d turn in less-than-stellar work anyway, because I didn’t give myself enough time to complete it. So my freshman year of college, I made the big decision to see a school counselor. And, man, I wish I’d done it a lot earlier.

One of the very first things my counselor did was ship me off to a doctor for anti-anxiety medication. Once I was on the right cocktail of pills, I felt like a new person. Suddenly, talking was a little less scary, and the shame of failure was much more fleeting. (Not everyone who has anxiety needs drugs to cope, but if you feel it’s interfering with everyday life, I do recommend at least talking to your doctor.) I also started therapy, and my counselor really helped change my outlook on the world. In some cases, I just needed practice. She’d give me assignments to do things I found terrifying, like asking for a job application at a local fast-food restaurant, and I slowly gained more confidence in my ability to handle these kinds of interactions. Most of my fears of rejection were in my head—no one ever told me, “Wow, you really effed up that conversation!”

I also talked about other things that were bothering me, and I got some clarity. Everyday schoolwork just wasn’t important enough for me to feel so stressed about it, and furthermore, it was OK to fail. I took this message in, and when I started to crash and burn in college biology, I didn’t force myself to stick it out. I accepted that biology and I were just never going to get along, and I dropped the course. Just a year before, I would have berated myself for weeks this for doing this, but now I only felt relief.

A year or two after I graduated high school, I had a conversation with my old algebra teacher. I said something about being bad at math, and he told me that I was never bad at math—my other classes just came so easily to me that I didn’t know what it was like to struggle to learn something. He pointed out that many of my classmates celebrated when they got a C. My perspective had been so skewed that I assumed I had really embarrassed myself by not being the best, and that others thought less of me as a result.

I realize now no one is thinking as hard about me as I am. That teacher on the playground was just worried that I’d fall, and she probably forgot about the incident five minutes later, while I’m still thinking about it 15 years later. My creative writing teacher just wanted to help me improve my story. Waitresses and bank tellers have dealt with literally thousands of small mistakes and awkward moments over the years.

Earlier today, I made a rather large mistake at my day job, resulting in my having to send a correction email to several thousand people. It was really, really embarrassing. But instead of retreating in panic and begging my boss not to fire me, I calmly apologized and then wrote a self-deprecating Facebook post so that EVERYONE had an opportunity to laugh at me. It felt a lot better than mentally beating myself up.

On the flip side, with the understanding that my failures were not permanent came the knowledge that most of my accomplishments have been similarly fleeting. My academic awards have done absolutely nothing for me apart from a few moments of pride and fodder for scholarship applications. Most of the compliments I got from my drama teacher are just fuzzy memories today.

I’m not saying that any of this was worthless. Being a good student served me well, but not because my teachers loved me—rather because it gave me skills and opportunities to move on in life. It’s important to work hard and nurture ambition, but for the right reasons—not to escape criticism, but because it makes you happy. It’s better to learn from your mistakes than not to make them at all. ♦