Theirs was the kind of friendship that lasts unto the ages of ages.

In Your Own Image 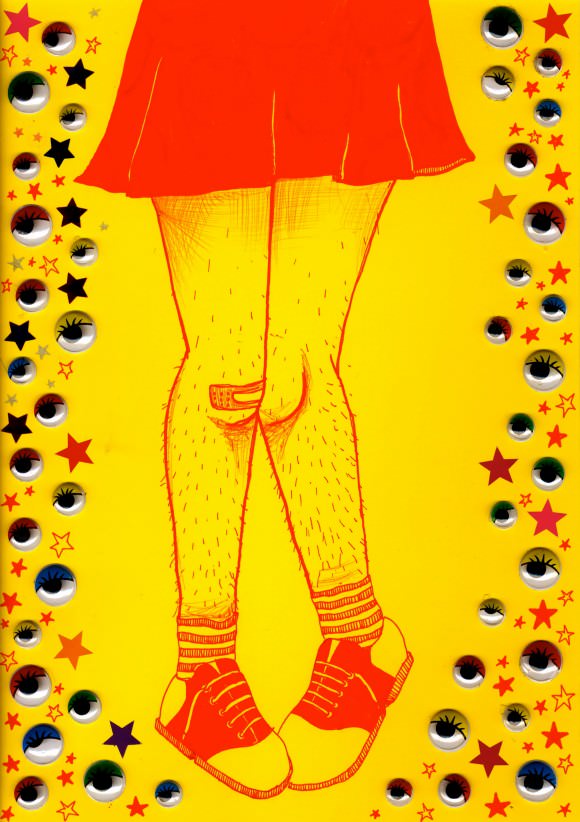 Milo stopped making out with me after I told him that I wanted to be reincarnated as a flea.

“Nobody loves fleas,” he said. “They are maybe the worst possible creatures a person could pick.”

“I like them,” I said. “They’re stealth. Nearly invisible but capable of ridiculous amounts of havoc.”

“They’re gross, Georgina. And they ruin everything. I can’t even think about them without breaking out in hives.” We had been kissing for 20 minutes, but now his attention was off of my lips and onto on his arms and the side of his face, which were glowing red from being freshly scratched.

“But they travel together, you know?” I said, trying to romanticize a blood-sucking nuisance. “Strength in numbers and all that.”

Milo kept scratching his face, then his back, and finally he asked me to leave. “I need a shower,” he said, as if I’d just rubbed toxic waste all over his body, as opposed to myself.

He hasn’t really spoken to me since. I saw him in the hallway three days ago and he gave me what I thought was a courtesy nod, until I realized he was just tipping his chin up in order to give his neck a good, hard scratch.

I mean, it’s not like I really want to be a flea. I have no interest in ruining the lives of golden retrievers or destroying someone’s beloved loveseat, and I can’t even get my finger pricked without needing a cup of orange juice and a 20-minute nap in the nurse’s office due to what my old pediatrician Dr. Barner once called “a real case of the hemoglobin-jeebies.” (Dr. Barner, my dad once theorized, “probably had a lot of fun in the ’60s.”)

I just picked something that could simultaneously hide out and cause a ruckus, a balance between disappearing and drawing attention that I haven’t personally figured out how to handle yet. I’m sure there are other creatures that can do it without sucking blood or keeping fumigators in business, but the first thing that came to mind was “flea,” and so “flea” was what I said.

I don’t even know why I asked Milo about reincarnation. I guess it was because I’d been thinking a lot about how the life I’m living now seems to belong to the Era of Garbage, and that I’m secretly holding out hope that the next time around I’ll be someone better, or at least the world in general will be better. Before I repulsed him with my talk of fleas, Milo said he wanted to be reincarnated as Spider-Man. I should have kept kissing him instead of asking him anything. That way, I wouldn’t have given him hives and he wouldn’t have given me the dumbest answer in the universe. This is how it works with every boy I’ve ever fallen for: we could have been perfect together, if thoughts weren’t involved.

Kyrie laughs when I tell her about the fleas. “You’re so gross,” she says. “This kid’s all up in your shirt and you start swooning over parasites.”

“I’m a romantic,” I tell her. We are sitting in her car, eating tacos and trying desperately to keep pieces of shredded lettuce from hitting the floor. We’re doing a terrible job, but the tacos are good, so whatever, we’ll deal with the smell three weeks from now.

“Your theory doesn’t even hold up though,” she says. She wipes a gob of sour cream from her mouth and continues: “Fleas aren’t stealth at all. They travel in enormous packs, and they jump. I mean, they sell them as circus performers for crap’s sake.”

“Whatever. I just wanted to pick something small but powerful.”

“You sound like your face.” When in doubt, I always go with “your face.”

Kyrie opens her mouth and shows off a half-chewed pile of taco. “At least I didn’t make out with some dude who wants to be Spider-Man in the next life,” she laughs, coughing on bits of corn shell.

“You’re disgusting,” I tell her.

“That’s the nicest thing anyone has ever said to me,” she says.

Kyrie has never had trouble drawing attention to herself. She was born beautiful, one of those babies that strangers stop on the street to compliment and coo over, and not much has changed over the past 16 years. She’s still beautiful, still gets stopped on the street, and still has the ability to enter a room and draw every single eye, just by existing. It’s not exactly her favorite thing in the world.

When we were younger, I used to try to keep up with her, afraid she’d forget me and wander into the world of the glamorous people, where hair is always shiny and skin is always clear. In second grade, when a mutual friend complimented Kyrie on her jet-black hair, I decided I needed jet-black hair, too, only I had no concept of how hair dye worked, and decided to color my entire head with a Mr. Sketch Licorice scented marker instead. My mother caught me when I was halfway through, and after several rough shampoos, I ended up with a blondish-grey mop that smelled vaguely of black jelly beans for three or four days. My classmates thought I was a weirdo and Kyrie had to save me by telling everyone that I’d dyed my hair with a special potion for a commercial that was only showing in France, where I was very, very famous. My classmates bought it, and then forgot about it over the weekend, because when I returned to class with my regular hair color the following Monday, no one said a word. Even when I did get attention, I needed Kyrie to spin it in a positive direction, and I couldn’t hold on to it anyway.