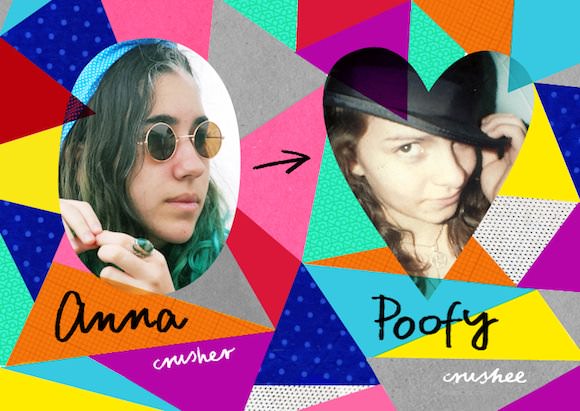 Anna and Poofy, 15, live in Belo Horizonte, Brazil, and have been alternately cracking each other up and making each other mad since the day they met, back in middle school.

I want to nominate my adorable best friend Poofy for Friend Crush. Poofy is a very unusual person. She loves the moon, and she thinks she can communicate with it in Latin. She’s like a creepy teen witch. Everyone always thinks she’s mad. Sometimes she teases me, and I get mad. One day I was so angry that I kicked her in the leg, and she kicked me back, but we are best friends. I love her so much! Though we are really different, we have lots of fun together. She makes my life more bright and colorful, even though she’s always wearing black.

ROOKIE: How did Poofy get her nickname?

ANNA [crusher]: In the sixth Harry Potter movie, the potions teacher, Horace Slughorn, says something like “That’s life, I suppose. You go along, and suddenly…poof!” And the “poof” in that phrase means death. It’s subtle, which is why she liked it. She started saying “Poof!” to everything that was going to be over, and our music teacher said her nickname must be Poofy. Now everyone knows her as Poofy. No one knows her as Isadora. She’s gonna kill me because I told you her real name!

No, she thinks it’s boring! She’s a rebel, and she hates everything. She hates being Brazilian, because she’s Brazilian. She wants to be Italian. But if she were Italian, she’d hate that, too.

How did you two meet?

We were in the same school starting in sixth grade, but we didn’t know each other until seventh grade, when she was in my class. At the time, I liked to wear different sneakers to school—like a green shoe from one pair with a brown one from another. Everyone laughed at me. I felt bad, but one day I realized that she wore her sneakers the same way, except one of hers was black and the other was pink. We started talking and realized we have things in common, so we became friends.

What did you think of her before you noticed her shoes?

I thought she was crazy. She always shouted at people, and she used to hit the boys when they did things she didn’t like. I was a bit scared of her. I’m still a bit scared of her! But now I know she’s a good person. She can make me happy when I don’t have anything to be happy about. She can always make me smile or laugh. She lights up my world.

Do you ever argue?

What’s the last thing you fought about?

I play bass, and she wanted me to play a song for her. So I played “Balrog Boogie” by Diablo Swing Orchestra, and she said it was all wrong. I said, “It’s not wrong—I’m the one who plays the instrument!” And she just said, “No, it’s wrong.” I got really mad at her, because I get mad when people criticize me, and then I hit her with the bass.

How do you make up after something like that?

When we’re angry at each other and then notice what’s happening, we can’t stop laughing. When I hit her, I was laughing, and she was laughing, too. We’re never serious, even when we fight. It’s good to be with her, because I never have to face real life. We can just play around and laugh at ourselves. 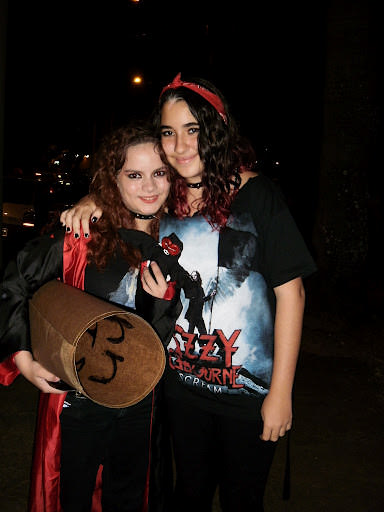 Poofy and Anna at an Ozzy Osbourne concert last year.

What are some things you both find funny?

So, in the name of friendship, you’re forgetting about him?

Yes. And I have other crushes, so it’s not a big deal. We call our crushes by code names. Mine is Holy Mary, because when I saw him, I was like, “HOLY MARY, he’s so hot!” Another one is Jesus Christ, for the same reason, but also because he looks like Jesus: He has long hair and a beard. Poofy does archery, and he practices with her. She’s into anything and everything that has to do with medieval times.

Is there anything she’s obsessed with that you think is weird?

She wants to buy a medieval sword. She once told me she wants to make one at home, and I was like, “How are you going to make a medieval sword at home?” I don’t think she knows how difficult it must be. But sometimes she tries some crazy things that work. A few years ago, she was obsessed with making clothes, and I was like, “You don’t know how to do it.” Then she made a goth dress that was unbelievable. It was red and black and really original.

What’s something about her that you know but other people don’t?

She’s really fragile, but she doesn’t like to show it. She pretends she’s indestructible, even though she feels her emotions very strongly. She’s very sensitive. She always knows what I’m thinking. We joke that we have telepathy. Sometimes I’ll call her and say, “Poofy, you won’t believe what happened.” And she’ll know exactly what happened. When I called her to tell her my boyfriend and I broke up, I didn’t say anything. I just started crying. I was crying and crying and crying. And she just said, “He broke up with you, right?” It was weird. How could she have known?

Did she say anything that made you feel better?

She’s really sincere, so when she said maybe it was just a phase, it made me feel better. Thinking of it as a phase was good for me at the time, because I was really sad. She also made a potion so my boyfriend would come back to me. She grabbed her cauldron, and she put crystals and a pentagram and an apple and roses and some weird stuff in it. It was like a tea. She said, “Drink it, and your boyfriend will come back.” And I was like, “OK.” It didn’t work. It actually made me really sick!

Anna, left, and Poofy with their light sabers.

ROOKIE: Anna was telling me that before you became friends, she was a little afraid of you.

POOFY [crushee]: Yes, everyone at school was afraid of me.

What do you remember about meeting her?

I said something like, “Yo, you have white hair! That’s cool! How did you get it?!” She has localized albinism on her forehead.

What made you want to be her friend?

She was the first person at school to be so patient with me. You have to be a master of patience to be my friend.

Why? Can you remember a time when she was especially patient with you?

I suck when I’m in love. I’m too Shakespearian. And she is always saying, “OK, Poofy, he loves you, too, even though he doesn’t know you.”

Do you give her each other relationship advice?

I’m not the right person to give relationship advice, but I always say to her, “If you like someone, don’t show it. Make him be your friend, and then he’ll love you.” Because when I do that, it works.

But I’m the voice of truth in her life. Three days ago, she sent me her chat history with a guy she likes, and she had written things to him like “You make the salad and the cupcakes, and I make the dinner, so we can marry now.” Five days before that, I had told her he was the perfect guy for her.

We fight a lot. A couple weeks ago, we fought because I put a piece of wood in our dinner.

I study Wicca, and it was May 1, which is the pagan holiday of Beltane. We were celebrating in her backyard, and I found a piece of wood that didn’t belong to any type of tree near us. I said to her, “It’s a god’s gift!” And she was like, “OK.” So later I crushed it and put it into the purê de batata and told her it was a special spice. It made her sick.

What makes Anna such a special friend?

She can stand me! She understands my philosophical points of view and does every stupid thing I want to do. Also, she is extremely simple and very direct. She has a personality very similar to mine, but very different, too. She is my green-haired human. ♦

To nominate your own Friend Crush, send an email to [email protected] telling us why your pal completes you. Please include both of your names, your ages, and a big, clear picture of EACH of you. Thank you!