A song premiere from + mini interview with CSS.

How to Make a Creepy Eyeball Ring

CSS have come a long way from their beginnings in the early naughts, when the DIY-funsters were known more for partying in Brazilian clubs than for making catchy, smart electro-pop. Then came their first (eponymous) album, released in Brazil in 2005 and in the U.S. a year later by Sup Pop (making them the first South American band on the label).

They’ve stayed true to themselves while exploring new ground on their fourth studio album, Planta. They’ve generously allowed us to premiere a song off that album, “Dynamite,” today:

When CSS singer Lovefoxxx (aka Luísa Hanae Matsushita) agreed to answer a few of our questions about Planta over email we didn’t know that she would also be sending us this treasure trove of photos and images to go with it! Thank you, Lovefoxxx! —Bianca

ROOKIE: CSS’s friend Hannah Blilie of the Gossip plays drums on the track “Dynamite” and TV on the Radio’s Dave Sitek produced the record; what do you feel these collaborators added to Planta?

Lovefoxxx: Dave is a very special person. He brought confidence in each of us that made the creativity flow. He doesn’t have rules or a format when working. We would do countless minutes of loops while recording synths, then adding effects and playing with drum machines that he’s got all synched at the same tempo. It felt like an electronic jam session but as [CSS drummer and guitarist] Luiza [Sá] says, “it’s soulful.” Hannah was so amazing. She is a mutual friend and was touring in L.A. She came by and killed it. It was fun to see her playing, because that’s the fastest song on Planta. Girlfriend is badass! 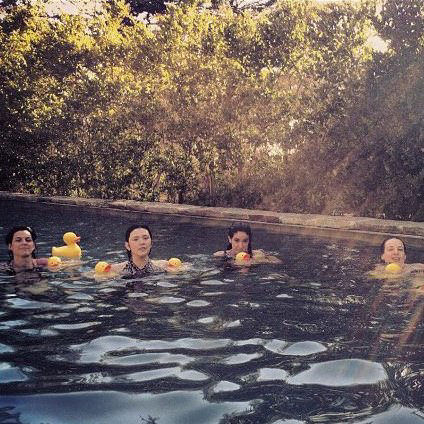 Hanging out at producer David Sitek’s studio aka his house. Photo by David Sitek.

Also, the first single, “Hangover,” was co-written with Tim Armstrong of the punk band Rancid. Why did you choose to work with him? Are you punk rock fans?

Yes, we like punk rock! Tim got in touch with us and we went by his studio to meet and hang out. We had never done a songwriting “session” like that before, but it was super casual and it worked.

Planta was recorded in Los Angeles—it’s the first time CSS has recorded outside of Brazil. Did that influence the sound of the record?

L.A. was a kind city for writing and recording. It gave us all a sense of ease.

Tell us one of your fondest memories from your time there.

So many! Dance parties. Family dinners. Tattoo ’n’ pool parties at Dave’s house. Our pirate radio show “Frappuccino ’n’ Friends.” Going to karaoke twice a week—the first night we were there, I was in the bathroom and “2 Become 1” started playing so I came running out. I thought it was [CSS guitarist] Ana [Rezende] who chose it. But she thought I had picked it out. It turned out that who actually chose it was Kate Nash! 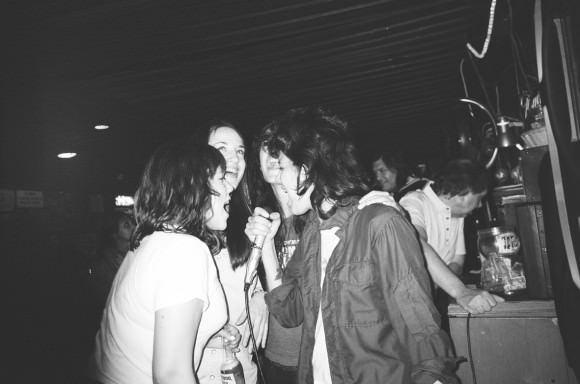 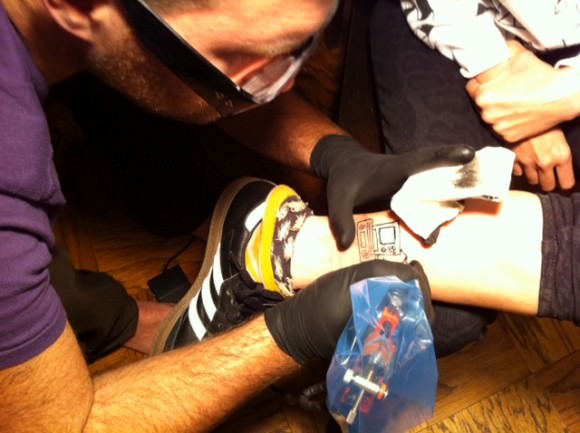 David Sitek tattooing a TV on top of a radio onto Ana. 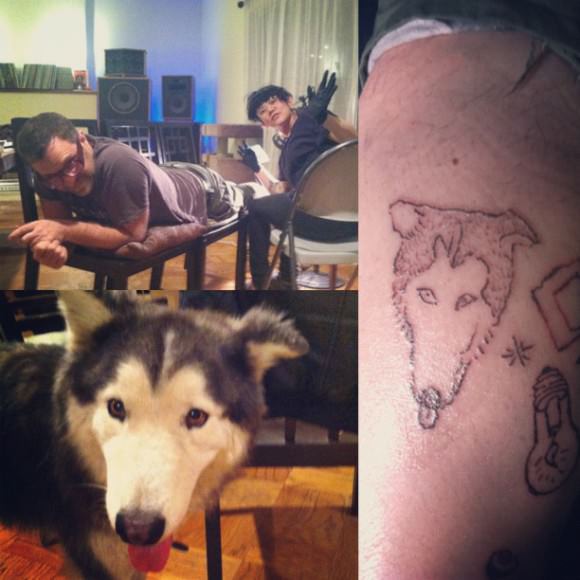 Why’d you call the album Planta [which means “plant” in Portuguese]?

When we were shooting the album cover Carol[ine Parra, drummer and guitarist for CSS] shouted that word out. And I loved it. An album is like a plant: When you start you don’t know what you’ll end up with, exactly. Just like when you plant a seed. 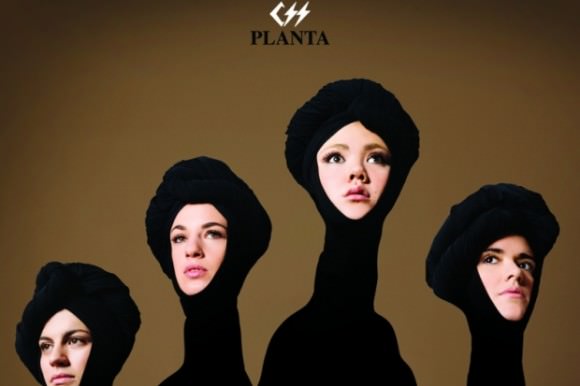 I love the cover art. What was the thought behind it?

It’s inspired by a Richard Avedon portrait of Audrey Hepburn. I think it looks like a ginger root!

The new songs are quite different from previous CSS releases, they’re more stripped down and there’s more of a dance-y pop rock reggae vibe. What inspired this direction?

Uhhh! I like that you feel the reggae vibe. We love reggae. Is the music we listen to when we are all together hanging out barbecuing! About being more stripped down, I agree with you. It has a lot to do with how Dave produces; it’s like making the most with the least. We can hear it all, and it sounds good.

What were you listening to while making Planta?

Together we would listen to some of the new Hunx, new Leonard Cohen, Chairlift, Wire, DBs, Congos, Sebastien Tellier, Altered Images. But we got lots of influence from YouTube videos. We watched a lot of RuPaul’s Drag Race and the Olympics.

Adriano Cintra left CSS in 2011. He used to write the music for a lot of your songs, while you wrote the lyrics. What’s the songwriting process like now that he’s gone?

When we started writing the songs for Planta we rented a house in Echo Park, borrowed equipment from our friends, and just started making music. We had no producer, no record deal—only ourselves and our friends. We were open and supportive of one another while we exchanged ideas. We wrote in different ways: guitar demos and synth demos; electronic and stripped down; starting with lyrics and adding music and vice versa; starting with chorus and filling in the rest or having a full song and stripping it down. We believe L.A. is magical for us. As we moved along the right people entered in our lives. 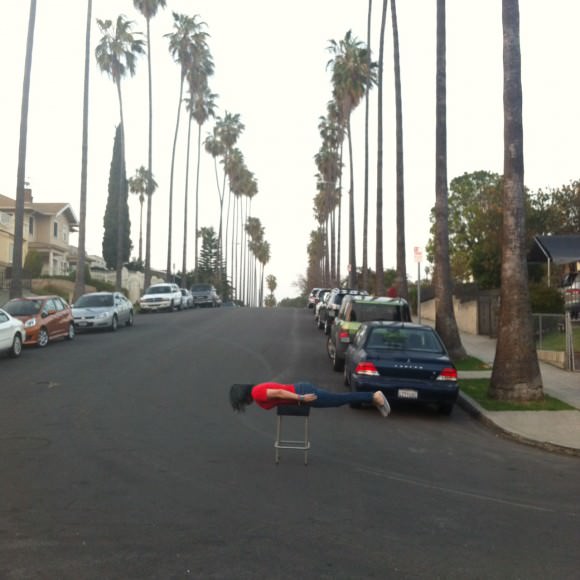 What did Adriano’s departure mean to you and for the evolution of CSS?

He wasn’t doing the tours anymore and didn’t want to be in the band, so his departure wasn’t a shock to us. It brought change and synched us.

I love the track “Teenage Tiger Cat.” It’s super playful. You sing: “I’m getting rowdy, rowdy, rooooar” like a tiger! Were you a rowdy teen?

That song is about one of Dave’s cats, called Evan. When we first got to his studio he was a baby kitten…then within a few months he became an adult-size cat and was behaving like a rowdy teenager. I was a nerdy teenager. I moved out to São Paulo when I was 16 because I got an internship with a young fashion designer. But the early years of CSS were pretty rowdy! 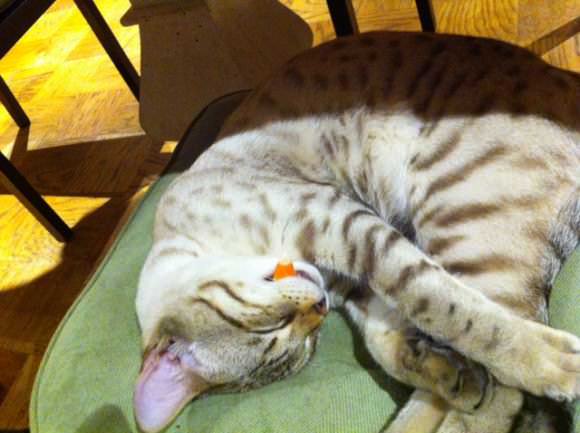 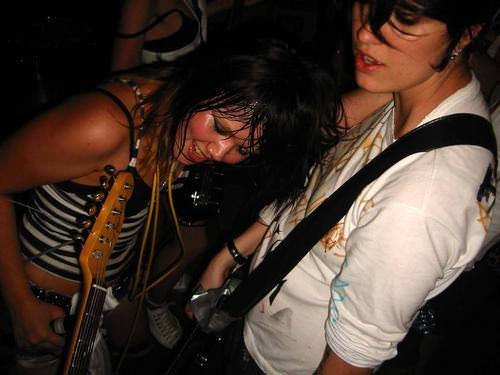 Why did you stop doing fashion?

It wasn’t a conscious decision—I just went with the flow. It was because the band was getting busier and I often had to leave work earlier to soundcheck. My boss was cool and she always got excited for me, but I started feeling bad for my co-workers. So I quit my job.

You’ve mentioned in the past that you’re really glad you didn’t have the internet when you were a teenager. How come?

The level of communication vs. presence is what has changed the most. It was a positive thing not to have immediate access to everything at all times. When I was 11 me and my two best friends would have sleepovers and draw our favorite anime (Saint Seiya ) through the whole weekend! (We all had crushes on the characters and would draw ourselves making out with them. Dragon Shiryū was totally my first boyfriend…what a dreamboat!) Does this still happen? I hope so!  I hope the younger kids find a way to develop focus, tolerance, and patience. 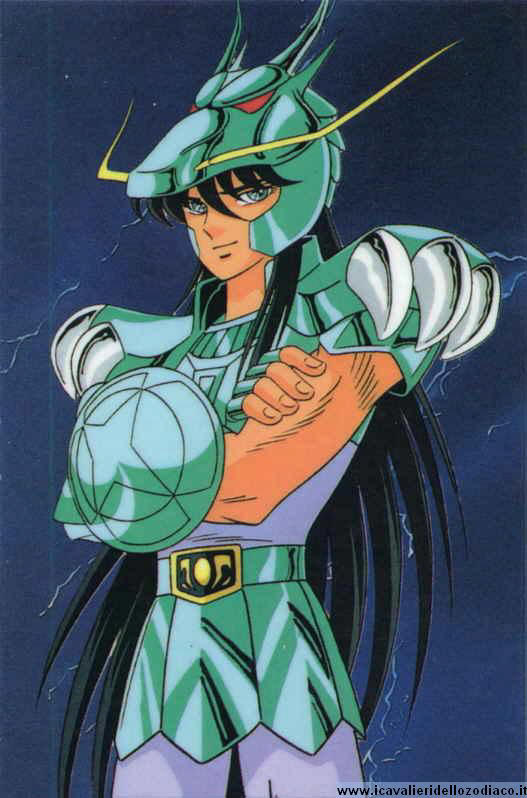 You’re also a visual artist; why is it important to you to create things?

It’s for contentment. For beauty. To make things better and nicer. It’s a way to put love back into the world. It’s fun and it brings people together. When I was younger I would wear clothes or makeup that looked aggressive, often to push people’s buttons (even thought I wouldn’t admit it then) because it was that feeling of “THIS IS WHO I AM, EAT IT.” But now the urge is for love, and to show gratitude to the world.

CSS is about to start shooting a makeover show for the web [details here], where you’ll also be giving people relationship and life advice. What’s some advice you would give our readers?

You can show compassion without dimming yourself down. Be true. Be a flower.

Finally, what other Latin American bands should we check out?

KUMBIA QUEERS! Five girls from Argentina and one from Mexico. They were all previously in punk bands and made this group. My favorites songs are “Mientes” and “Gascón.” ♦