All By My Selfie

What your GPOYs say about you.

Once upon a time, taking a picture of yourself was hard. It was so hard that it was called a “self-portrait,” and you had to hold a camera with film inside of it at arm’s length, push down on the button, and hope you had managed to get yourself in the frame. You used up a bunch of pictures in the process, and then you had to go get it developed at Walgreens, which took between one and three days if you weren’t willing to pay the exorbitant fee for one-hour development (and you were not).

You were helpless. After the camera’s flash went off, you were left with no clue as to how the pictures looked. There were no second chances, no handy delete buttons or quick redos with better hair and no blinking. And you could be sure the gangly adolescent boy who worked behind the counter (and also went to your school) would be the first person to see every last frame.

Now we have digital cameras. And since digital cameras come standard on most phones, and they have a reversible screen with which to better regard ourselves, we can take endless pictures and instantly show them to everyone else on Facebook and Instagram and Snapchat. These self-portraits are now just called selfies, a shorthand that betrays how easy they are to create, the most casual thing in the world. Everyone—everyone—takes them.

We love to take pictures of ourselves (And why shouldn’t we? We are smokin’). Selfies are a way to show other people the person we’d like them to see. But the funny part is: even though everybody loves to take them, it’s still hard for some of us to own up to the fact that we’re taking a picture of ourselves expressly for people to see. It can feel a little silly. It can feel a little vain. We are not just aware that we are taking a picture of ourselves, we are hyper-aware, and so while taking the picture, it’s like we’re floating above our bodies, objectively watching ourselves take a picture of ourselves and judging our poses from an outsider’s perspective. And we are aware that other people are aware that this is a very self-conscious and choreographed decision. This is where selfies get weird.

The great-grandaddy of hahaha-you’re-taking-a-picture-of-yourself websites was the now-defunct antiduckface.com, where the website owners nastily made fun of people (usually women) doing this face. 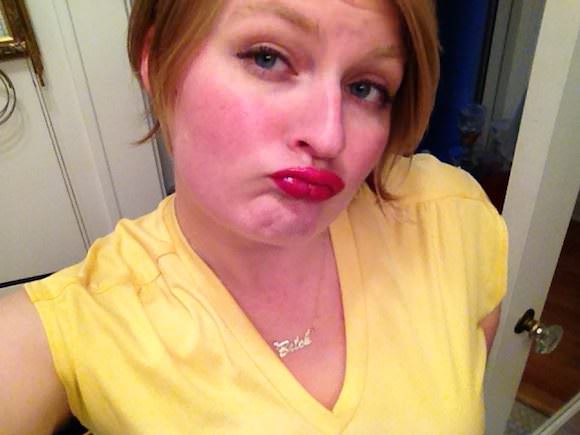 This is Duckface. Everybody do it together! Raise the camera above your face. Tilt your chin coyly down or aggressively up. Stick your lips out as far as they can go, and pretend you’re a duck or a trout or a Victoria’s Secret model. HAWT.

I imagine it caught on because it slims your face and makes your cheekbones stand out, but it has been so ridiculed that by now almost no one does it for real, unless they’re doing Duckface to prove that they know Duckface exists.

But selfies don’t stop here, and they get better. There’s a whole world of selfies out there. They are an art and a science, friends, and if we’re going to bombard our friends and family with them, we must get each type of selfie down pat, to make sure the essence and meaning of each is lost on no one.

The Shot From Above 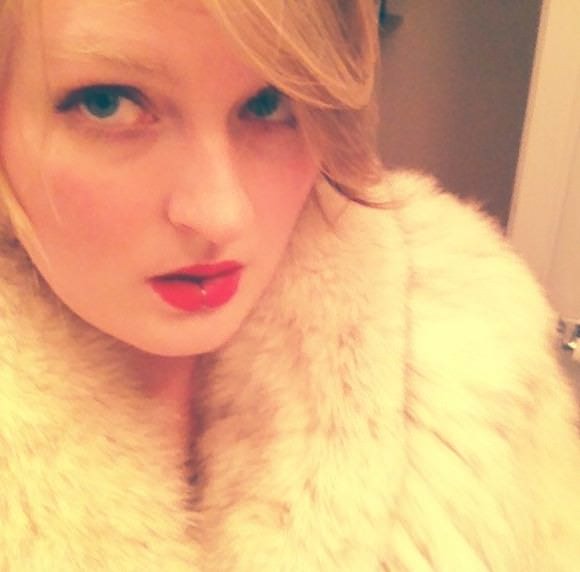 A timeless classic, the Shot From Above is as old as Duckface, and it’s important to have this one in your repertoire, because this is how you will fool people into thinking that you are actually an anime drawing personified. Almost exclusively the selfie of choice for profile pics on online dating sites, this pose makes your eyes look huge, your face slender and chiseled, and your chin a li’l bit pointier. It’s basically what a low-flying pigeon would see if he looked down. Bonus points if you run it through a filter to make your skin as poreless as a doll’s. 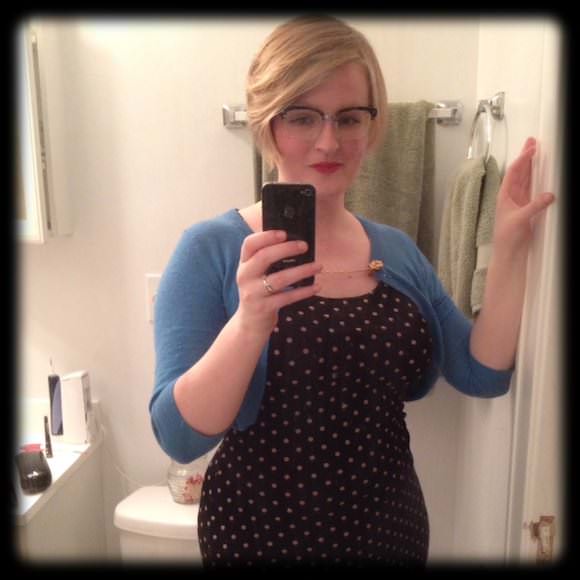 The Mirror selfie is harder than it looks. Not only do you have to position the camera just right, but you will likely have a weird/uncomfortable expression on your face (see above). That’s because we are in meta territory. This is a picture of you blatantly taking a picture of yourself. The mirror also adds a kind of harsh reality to your selfie game, like a still from a grim documentary, because it is usually done in terrible bathroom lighting.

HOWEVER! We soldier onward, because sometimes we are wearing something cute and it would be a crime not to show others exactly what sweater clips are for, y’know?

(Note: While lots of people do this selfie to show off their outfits, I’ve noticed that some boys/men prefer to do this one with their shirts off and a coolly challenging expression, like, Yeah, I’m taking a picture of myself. Here are my nipples in a poorly lit gym—enjoy.) 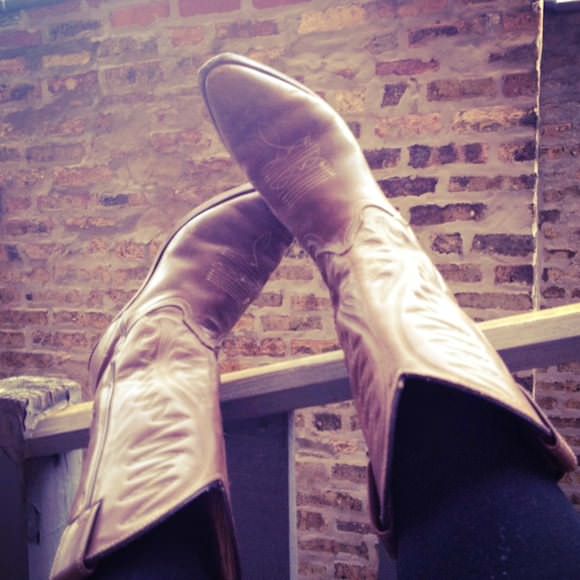 The Shoe Shot makes a bold statement. It keeps the viewer firmly planted in the now. It says: Here are my feet today. Right this second, this is what I am doing. I am allowing you to follow my life in real time, to see what I see from my point of view. Today, I am wearing cute shoes I want you to notice in a setting that I want you to see, like a porch (lazy Sunday, y’all!) or the beach (you jelly?). Don’t you want to know what the rest of me is doing? Of course you do. But this is all you get. 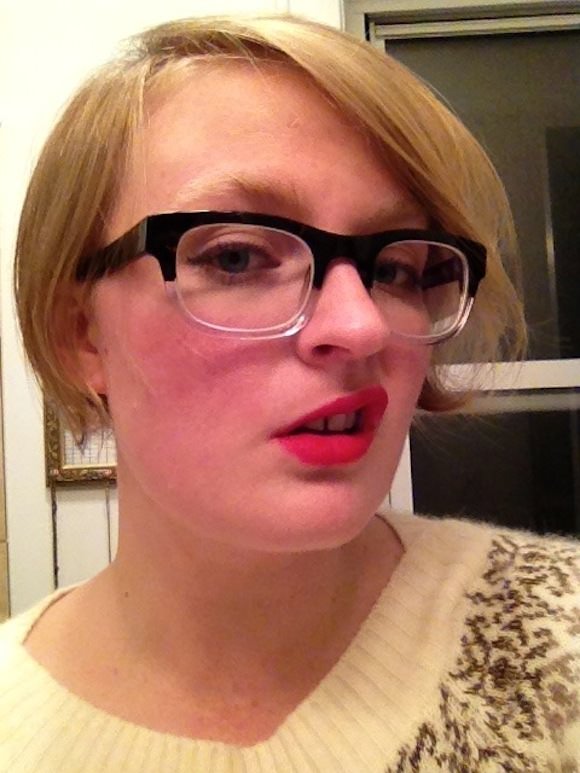 The Ironic Selfie is complicated. Perhaps you have a new pair of glasses to show off. Perhaps you haven’t taken a selfie in several days and you can’t think of a good excuse to take a new one. Yet selfie you must, so you protect your innermost self from accusations of narcissism by making a face, as if to say, “Yes, world, I may be taking a picture of myself, but you know what? I don’t take myself that seriously, and I’m making a face to prove it. No, for real, I don’t even want to be in this picture. That I took.” 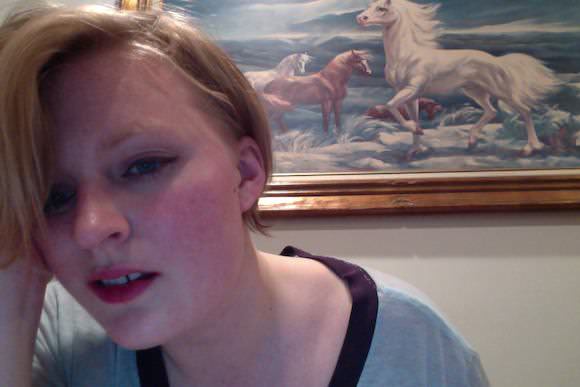 The FaceTime Selfie is the direct result of watching yourself out of the corner of your eye as you chat or Skype online with your friends. It’s impossible not to stare at yourself onscreen, which is why you start looking at yourself even more, going IS THIS HOW I LOOK WHEN I TALK OH MY GOD? It feels illicit, like something you’re not supposed to be seeing, because you’re supposed to be looking at the other person you’re having a conversation with, like a human being. But the movement of your magnificent self catches your eye, and suddenly you’re all “I love chatting with you, but I’m just noticing that I am looking preeetty good right now, gimme one sec here while I take a screenshot… OK, sorry, what were you saying about getting dumped?” 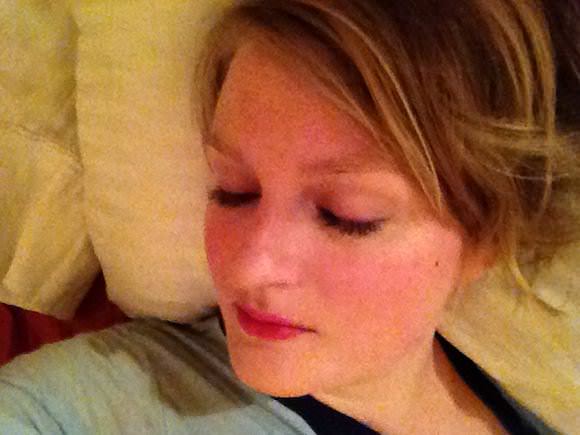 The Sleeper is inexplicably popular. No one can explain it. No one finds it believable that someone is soooo cute when they sleep that the other person they were with simply had to document the moment, and yet I see it in my Instagram feed almost every morning.

Here, I am very clearly asleep, you guys—look how peaceful and not-at-all-drooly I look when I’m sleeping!—and it is clear that someone else who is not at all me (probably my ADORING GIRLFRIEND—god, what a creeper) took this photo of me sleeping adorably, without my knowledge, as I could not have done it, because look at me. I’m dead to the world.

Bonus points for a legitimately snoozing animal curled up next to you while you pretend to sleep. 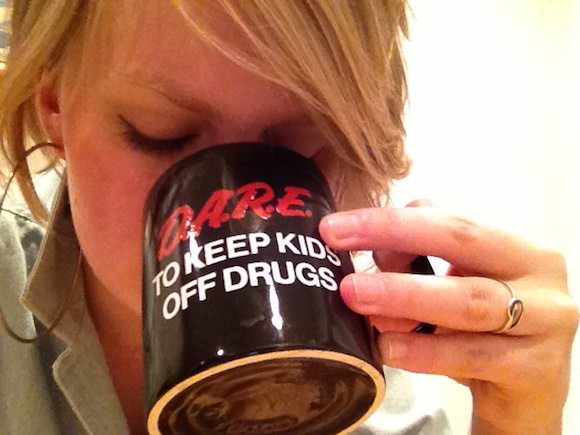 I most definitely did NOT take this picture, either. My, um, friend did. My friend who was sitting very close to me. While we had coffee. While I had mascara on.

Really nailing this selfie means you have to think outside the box. You need movement, you need to set the scene, you need props. HOW CAN WE MAKE THIS BELIEVABLE, people? You must try to catch your fine self in the very act of living life. 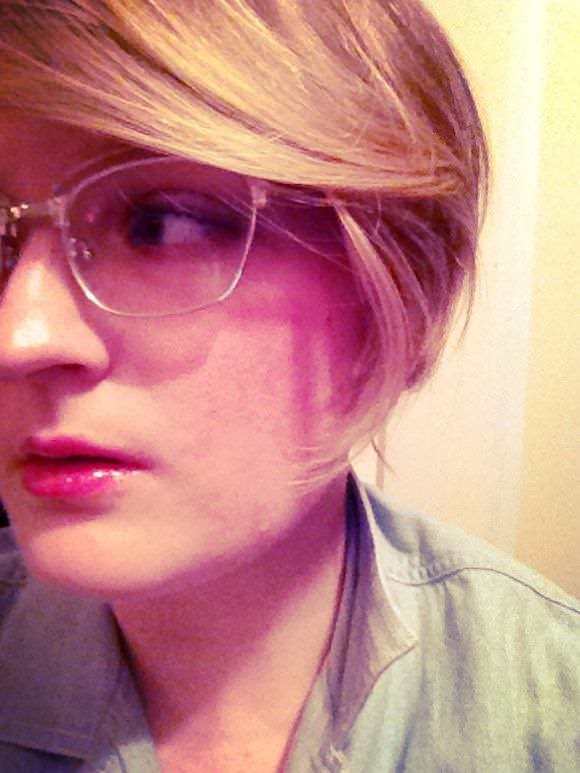 Like a half-moon, this selfie is rare but magical. Beloved by photographers who know that the Half-Face makes it look like someone snapped a picture of you looking casual at a party, it radiates mystique. We are all our own Mariahs, knowing we are best captured from a certain side.

To do this, it is crucial to compose your face in a way that makes it clear that you are looking way off in the distance, utterly unaware of the camera’s critical gaze. 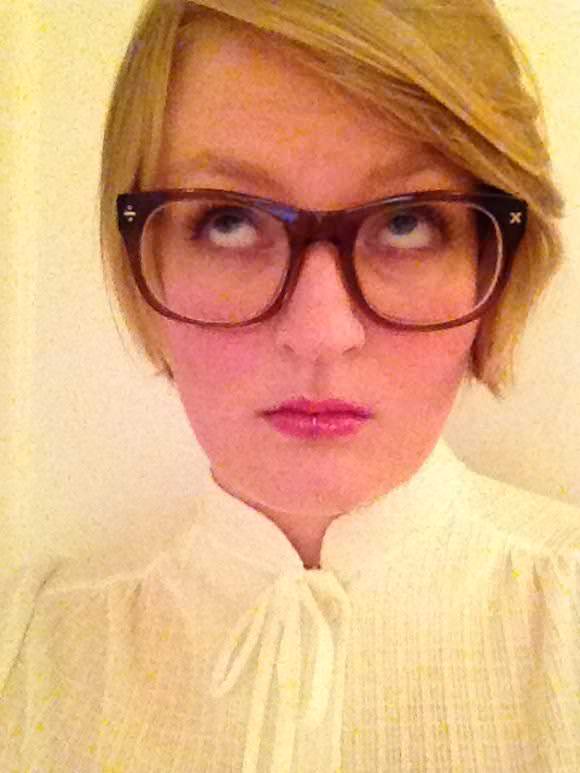 The Nerd is the exact opposite of what it’s proclaiming to be. When done properly, it lets others know that while you may be totally killin’ it in those big glasses (the sign of a true nerd, amirit?), you are tooootally not a nerd. Even if you actually are a big, awesome nerd, you’re really not, because you can loosen up and goof around with stereotypes for this composition.

There are so many more types of selfies—the Couple-Kiss, the Bikini, the Crier, the New Haircut, the Unfunny Comic (a selfie in four parts). We haven’t even scratched the surface. But it’s an impossible task. There’ll be a whole new crop of ’em tomorrow. ♦