What I Wish I Knew About My Period

Pointers for those who menstruate, or are about to.

Gentle on My Mind 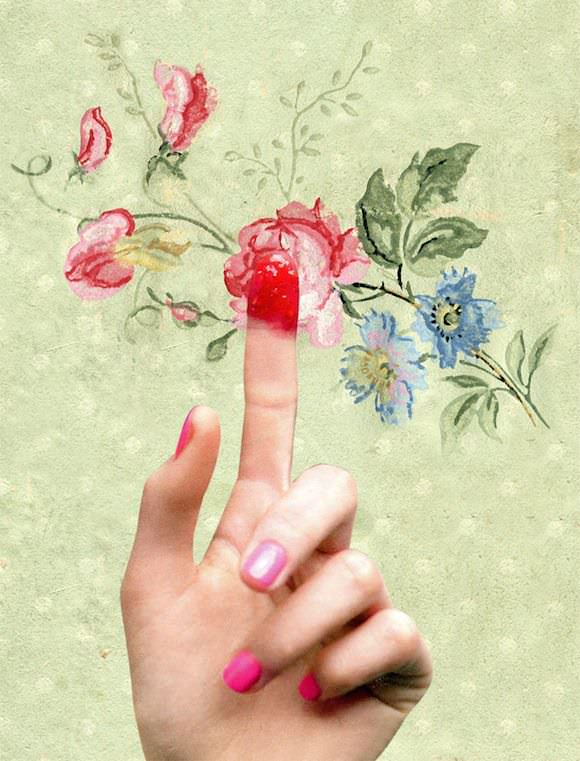 It was Labor Day weekend, the last free days of summer before school started. I woke up in my best friend’s bed and felt weird. I got up to pee and saw that there was a darkish stain on her sheets where I had been lying. I felt sick to my stomach, because I knew the worst thing ever had happened: I had gotten my period. I was 10.

I was an early bloomer. (Side note: Can we come up with a new term for this? That one is so Downton Abbey.) I had always been the youngest in my class, but 10 years on the planet is not a long time to prepare for the reality that your body can now make babies, and in exchange for this superpower you will be tortured for three to five days per month with any or all of the following: painful body-twisting cramps, zits, headaches, mood swings, and, not to put too fine a point on it, BLOOD coming out of your VAGINA.

Needless to say, I’m older now, and I have been dealing with my period for what seems like forEVER. So I thought I’d share some of what I’ve experienced and learned with any early—or late, or medium—bloomers out there.

(One more note before we start: I know that not all girls get their periods. Some of you weren’t even born with uteruses or vaginas. And that some people with vaginas and uteruses and periods are not girls. This article is for anyone who gets their period, regardless of gender.)

1. Getting my period wasn’t like it was for Margaret in Are You There God? It’s Me, Margaret. And I guess that was OK.

Have you read this book by Judy Blume? It’s all about this girl Margaret and how badly she wants to get her period. She is obsessed with this and all other possible signs of puberty, like growing boobs ’n’ pubes. I read Are You There God? in elementary school; it was my primary source of menstruation information. It may have been my only source—at the time I had no internet, none of my friends were talking about this stuff, and I was afraid/embarrassed to talk to my mom about it. So I relied on Judy Blume, patron saint of all matters related to girlhood.

Margaret and her BFFs (slash frenemies) Gretchen, Nancy, and Janie looked forward to their periods so intensely that they PRAYED FOR THEM and lied about getting them before they had. This was so confusing to me—almost as confusing as the complicated belts and hooks and pads that the girls in the book had to wear, because the book came out in 1970, when adhesive pads were still a new thing and I guess not that common? (I’ve been told that Judy Blume has since changed the book so the menstrual-flow staunching reflects the times, which is SUCH a bummer. Fingers crossed the brand of pads the girls use is still called Teenage Softies.) Puberty scared the hell out of me. I heard my mom’s talk of getting me a bra as a threat, not a promise (I held out until the last week of sixth grade). I felt terror at the sight of my first pubic hair. And the scariest thing was the idea of getting my period—it just sounded like a very uncomfortable physical situation that comes with a lot of responsibility.

Aside from waking up and feeling dread, I can’t recall anything about the Day I Became a Woman. I assume I told my friend’s mom what was going on and then went home and told my mom? But I don’t know. I do remember wanting to cry, or maybe I did cry, and feeling embarrassed and convinced that everyone at school on Monday would just know what had happened.

I’ve since read that fewer than 10% of girls get their periods before they turn 11. But since I was the youngest kid in my grade, most of my peers were almost 12, and so it’s very possible that I wasn’t the only girl in Mr. Manfredi’s sixth grade class who had to wear giant maxipads (ugh) under her acid-wash jeans. I wish I had known that then, because I felt really alone. (Once I had to go to a sleepover while I had my period and I was so mortified that someone would see a pad in the garbage can that I snuck out to the garage when no one was looking and put it in the trash can out there.) It would have been nice if someone had told me that there’s nothing shameful about getting your period—and also that it’s OK not to be really psyched about it, too. But no one talked to me like that, because I didn’t have any hippies in my life.

I also had no one and nowhere to turn to for answers to my myriad questions, such as:

How much blood is actually coming out of me?
It can feel like gallons. Especially when it gets on the sheets or, ugh, on your clothes. (Both of these things: normal. Annoying, but normal.) It turns out that it’s typically less than six tablespoons a month. And it’s bloody, but it’s not all blood: It’s mixed with fluid from your cervix and your vagina, and clumps of tissue from your uterus (these look like blood clots and are often called that, but they’re not).

Why are cramps so so terrible, and what exactly is happening?
Basically, puberty is your body telling you, HEY NOW, I’M PREPPED UP FOR A BABY! But at this point in your life, you may not be ready for that. So, OK, during your menstrual cycle, an egg is released into your uterus (aka the womb), which starts building up its walls to make it a safe place to grow a baby. But if no sperm comes over and fertilizes that egg, your U is like, “Oh, OK, I guess we don’t need all this extra padding,” so it contracts like a muscle (which it is) to get rid of it—aka you get your period. If your uterus contracts too hard, it can hurt. Sometimes it hurts a lot. How much it hurts is different for everyone; but I’ve heard that most people don’t get cramps the first year or two of menstruation, and that if you do eventually get them, they tend to get less painful over time (my mom says her cramps disappeared after she gave birth to her first kid [aka me]). A bad cramp can feel like someone is squeezing your abdomen and twisting it in their fist just for fun. I consider this the worst part about being magical enough to create life. I guess it’s a small price, but jeez. (With this, as with all physical stuff, if it hurts a lot lot LOT, see a doctor as soon as possible.)

1 2 3 4
Next →
are you there god? it's me margaret cramps hot water bottles judy blume maxipads menstrual cycles periods tampons