The Importance of Angsty Art

Sometimes it’s good to be bad. 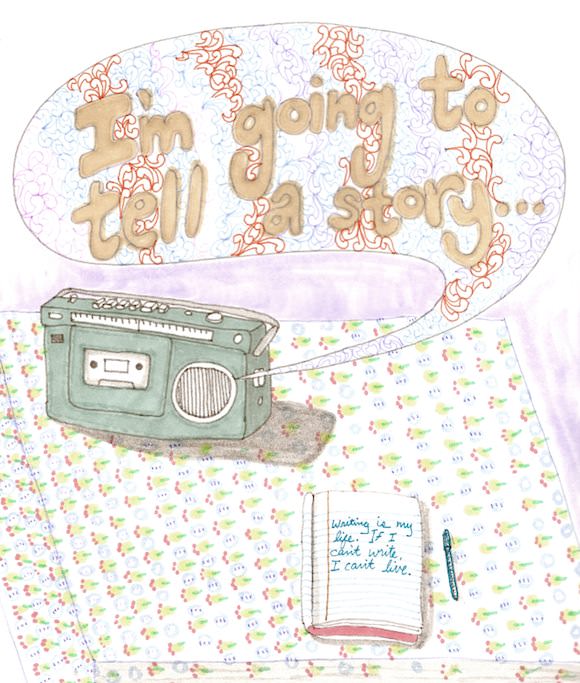 When I was four years old, I started recording stories for my parents, who were living in a place I knew little about except that it was on the “other side” of the world and called New York City and bodies had to travel through clouds to get there. My extended family of grandparents and aunts and uncles sat down with me every week or so to record my stories on tapes that they would stuff into envelopes padded with old newspapers and mail to my parents.

“You’re a born storyteller,” my family told me. “I know,” I said, solemn, serious, blithely confident.

My parents saved these tapes and gave them to me when I was in high school. This is the beginning, I thought to myself when they handed me the box with my Chinese name, Zhang Jia Ning. This is where it all started. This is when I decided—no, knew I would be a writer, when I knew I couldn’t be anything other than a writer.

When I went home for winter break my first year of college, I made myself listen to one of these tapes and had a small, solipsistic cry-fest. It opened with my auntie’s voice, strong and trembling, telling my parents how much we all missed them and how much we hoped they were not struggling too much in New York. She started to tell my parents about the things that were happening in Shanghai, how we were all doing well and looking forward to the warm promises of spring.

“I want to talk,” I said, interrupting my aunt in the middle of her story about my uncle’s new business venture. “I’m going to tell a story, a story, a story…” I repeated until I had silenced everyone else. I spoke aimlessly about a cow, a swallow, some whales, flowers that fall from the sky, and a beach with no fish, water, or sand.

“Do you like it?” I asked in the middle, and again when it was over. “Mama, Papa. I am thinking of you. I’m getting better at telling stories. My teacher praised me. I miss you so much. I think about you every day. Why aren’t you here with me?”

There was more, but I couldn’t finish listening to it.

I was 17 and, for the first time ever, experiencing some pretty serious writer’s block. It was weird, because the year before, when I was still in high school, I felt like I had so much to say. Like, SO MUCH. I filled up several spiral-bound notebooks that year with poetry and little short stories and fragments that were somewhere between straight-up prose and barely disguised diary-style bitching and moaning. I wrote all the time: on the eight-minute bus ride to school, on the eight-minute bus ride home from school, during my classes, during my free periods, during my lunch periods. I wrote instead of figuring out how to socialize with my peers. I wrote instead of figuring out how to talk to my parents. I wrote instead of listening to my baby brother after I had promised him that we could “play all day.” I carried a notebook, or sometimes several notebooks, with me everywhere I went. Everything was a potential poem or story: the way my English teacher picked at the mole next to her nose; the way my father would suddenly start singing the chorus of “Sad Movies” in the middle of a dinner after I complained about having a “sad, miserable life”; the time I saw a child outside of St. Mark’s Bookshop slap his mother on the mouth and how she responded, “You do that again and I’m going to push you in front of a moving bus the next time you cross the street”; the time I went downstairs to get an orange and found my mother sitting, her face tear-streaked, in the dining room, and she said, “I miss my family”; the way I responded with a single “oh” and then ran up the stairs without getting the orange. I truly felt I had been put on this earth to write all of this down, that my writing was, in a way, a gift, and that one day it would be recognized as such!

Though my brain had been storing praise and swelling with greedy self-congratulation for some time, my senior year of high school was when I definitively crossed over to being insufferably cocky. I actually had thoughts like I am such a good writer that it’s kind of embarrassing for everyone else in the class. When my teacher handed back our writing assignments, I’d think, Yes, I know, I know, in all your 10 years of teaching you have never read anything as stunningly beautiful as what I turned in last week. Join the club. A few things had led to this point: a fairly steady stream of compliments from my teachers, the couple of nights when I summoned the ovaries to perform some of my poetry out loud at a few open mics that ended in standing ovations, and a month-long screaming match with my mother over my declaration that there was no way in hell that I would study medicine or law when I got to Stanford, because I was going to be a writer.

“I never thought you would stoop to child abuse.”

“Why don’t we talk about it later,” my grandmother would often plead.

My notebooks from that year were particularly whiny and hit some screechingly high notes of torture.

This was why I had to be committed to my writing. Writing had to feel like life or death, because if it wasn’t the most important thing in the world to me, why was I staking my relationship with my mom on it?

And then something happened that pushed me over the edge—I got myself an education. At Stanford, I pretty much announced myself as an English major the day I got there. I raced to fulfill my prerequisites so that I could sign up for a poetry seminar and a fiction seminar in the same quarter. I remember staying up all night to write a 20-page short story for my fiction workshop and then staying up a second consecutive night to finish a poem for my poetry workshop. In the week that followed, I was giddy and buzzing with anticipation of how much mothafucking praise was about to be heaped on me by my teachers and classmates. Someone is probably going to say, “This is literally the best thing I’ve ever read in my life,” I thought to myself the night before class.

And someone did say that, but more people said that the pacing in my story didn’t make sense and that I had failed to characterize the protagonist and that I relied on mystery and withholding to mask the fact that my story lacked depth or any real meaning. My teacher more or less insinuated that my prose was drunk on its own lyricism and completely neglected to tell an actual narrative. One of the workshop critique letters I received from a fellow student said something like “Sorry, I actually had to put your story down at one point, because I was so frustrated and annoyed by it.”

My poetry was apparently even worse. The teacher was notorious for being brutal during workshop, and there was a rumor floating around that a student had once fled the room in tears. That shit’s not happening to me, I told myself. If anyone is gonna be in tears, it’s going to be the other students…FROM BEING SO MOVED BY MY POETRY.

My literature classes didn’t help. My professors stressed the importance of approaching a text with detachment, with a critical gaze rather than an emotional one. There wasn’t a place in academia for gushing or ranting. There wasn’t room to simply say, “I loved this and I don’t know why.” One had to use academic jargon. One had to be methodical and thorough. It was like listening to a song and wanting so badly to get up and dance, but instead of dancing, you have to sit there and think about why those sounds made you want to dance and consider the exact mechanics behind the formula of a danceable song. And I didn’t want to do that. I just wanted to dance. I just wanted to read. I just wanted to write. I didn’t want to deconstruct lines of poetry or do a close reading of Faulkner’s usage of semicolons.

The more English classes I took, the less pleasurable it became to read and write. I started to dread it. I started to take fewer risks. I started to become concerned with matters of taste. I started giving a shit what other people thought. It was like becoming a teenager all over again, a time when the more I understood about the world, the more fearful and timid I became. It was like when I wore a white crotchet sweater in sixth grade without a bra and my friends were all like, DAMN, I CAN SEE YOUR NIPPLES, and my awareness of my own body suddenly soared and I went from jumping around the playground without a worry to agonizing over getting dressed in the morning, because once I knew that the way we dress invites scrutiny, I could not forget it. The same with my writing—I couldn’t forget what I was learning, and the more I learned, the less free I felt.