Saturday Links: Bury Me in Sequins and Cheshire Cats Edition 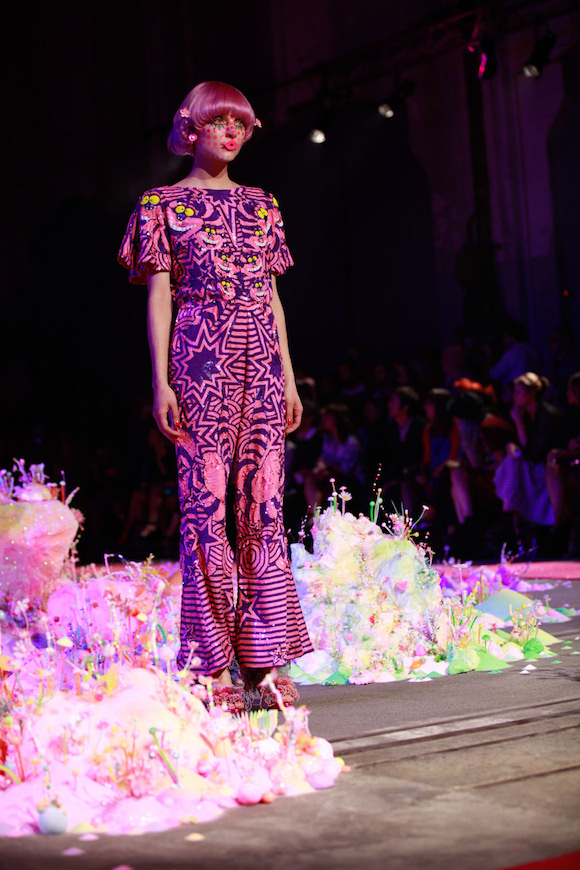 I’ve saved up my precious pennies to buy some of the fashion label Romance Was Born’s pieces, and they’re among my most treasured possessions. When pictures of their new collection for spring/summer 2013/2014 started filtering through Instagram earlier this week, my reaction was of intense awe and wonderment. The clothes are creepily psychedelic—a cornucopia of lucid dreams and nightmares. The designers, who are based in Australia, usually collaborate with other Australian artists to produce distinctive prints. This time around they hooked up with Tanya Schultz of Pip & Pop and DISNEY. Romance was Born x Pip & Pop x Disney = literally the best garments I have ever laid eyes on. You can see the collection’s presentation right here or check out more images here and here. My favorite piece is the Cheshire Cat jumpsuit above, which is heavily laden with sequins. Seriously, when I die, bury me in it. 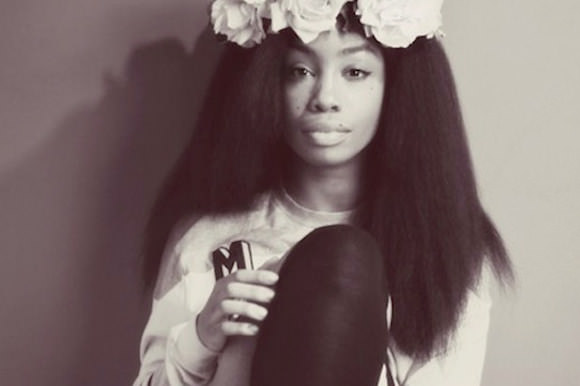 The 23-year-old New York-based singer Solana Rowe, better known as SZA, just released a free eight-song EP, and it is the DREAMIEST, shoegaziest R&B—a type of music she categorizes as “glitter trap.” The first song, “Castles,” samples Fleetwood Mac’s “Everywhere,” and plunges the listener into lyrics that are like a longing diary entry. “Wish I was prettier…for ya,” she sings. “Maybe I’ll understand when I get older.” This week, Rowe was profiled in the Village Voice, where she confesses that she wanted to be Lisa Simpson when she grew up. I love her already!

Within dance-music circles, there is a constant dialogue about appropriation that goes far beyond Baauer’s “Harlem Shake.” The producer/DJ Rizzla, one of the smartest people in dance music, recently delved into that murky territory in an interview with FACT magazine. He explained the difference between paying homage and stealing, and how not to be an appropriator—musical, cultural, or otherwise. The article’s details might feel a little esoteric at times, especially for non-dance-music fans, but Rizzla’s general advice is great for anyone. “Holding yourself accountable for originality is essential nowadays, because it’s so easy to be influenced by everything around you,” he says. “Get to know it, and you won’t want to rip it off.”

Two 17-year-old activists at SPARK, a group that agitates against the sexualization of girls by the media, wondered what would happen if they followed the advice put forth by the two big American magazines targeted at teenage girls. So they came up with The Seventeen/Teen Vogue Challenge, which challenges them to spend the month of April doing everything that those magazines tell them to do, focusing on a different section each week. Alice Wilder took on Seventeen, and YingYing Shang tackled Teen Vogue. This week’s topic is health and fitness, which means Alice has had to eat lunches like this one: 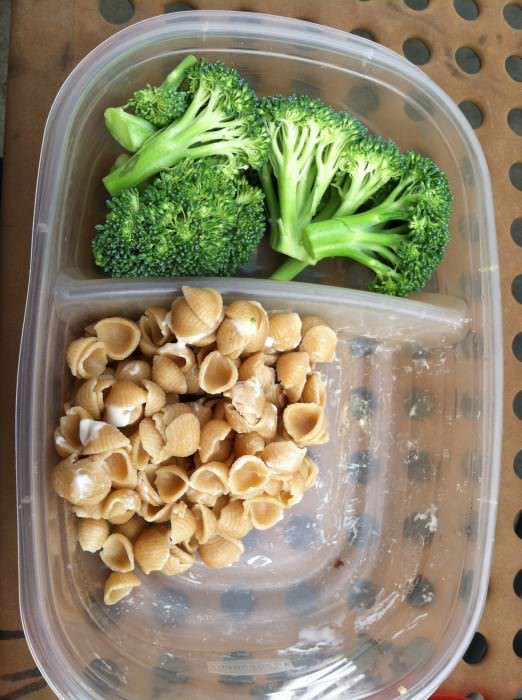 From the project’s Tumblr.

And last week, Alice dared YingYing to try out a flirtation technique that Seventeen calls the “bump-and-flatter”:

They were partially inspired by Jamie Keiles’s Seventeen Magazine Project from 2010, but Alice and YingYing wanted to focus on comparing the two magazines. Some of their findings so far, according to Alice: “Teen Vogue has higher-quality interviews and life advice, but [the clothes in] Seventeen can be more affordable.”

I made someone in my own life a guinea pig this week, too. Apparently there’s a new TV channel just for dogs? According to the company’s website it’s supposed to comfort lonely pupsters while their owners are at school/work by broadcasting “relaxing and stimulating content” that includes “invigorating images, animation, and exciting real-world sounds to keep them up and running.” I tested out this sample clip on my roommate Piney. Judge for yourselves, but he didn’t seem all that invigorated to me: 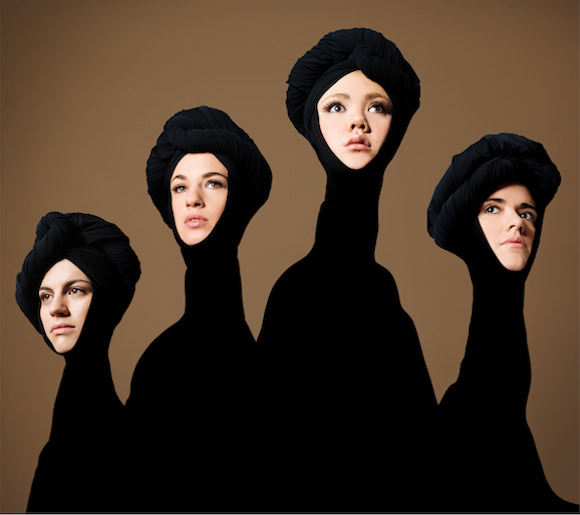 The cover of Planta, a CSS record that comes out in June.

CSS, my favorite rockin’ ladies from Brazil, have a new single called “Hangover,” and it made my week! Its bright synths, fuzzy guitar, electro-dubby horns, and overall playfulness have me dreaming of carefree summer days. The band’s new album, Planta, is scheduled to come out on June 11, and if you happen to live near L.A., they’re running a competition to win a makeover courtesy of their gorgeous selves. (The catch is that they’re going to film it for an upcoming web series.) They promise to “spice up your life” and even throw in some free “fashion, confidence, [and] relationships” advice. #CSSmakeover: Yes, please.

Two other kick-ass ladies who brought me a lot of joy this week were Against Me!’s Laura Jane Grace and her wife, the artist Heather Gabel. In an interview with Cosmopolitan, they talk about Grace’s first year as a transwoman and their five-plus-year marriage. “Growing up, I never had a role model to show me that you can be trans and live a happy life,” Grace said. “I hope that I can be that source of hope for someone out there who’s struggling.” 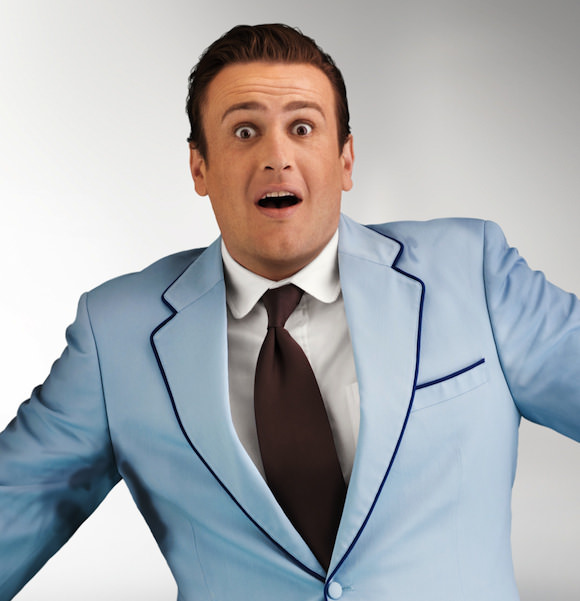 Jason Segel is adorable and cuddly and I love him even more now that I know he’s written a series of YA novels. I’m pre-ordering them (in my heart). 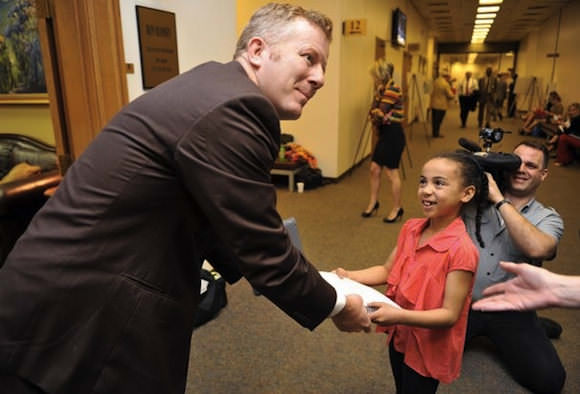 On Thursday, Aamira Fetuga, an eight-year-old girl from Tennessee, trailed the Tennessee state senator Stacey Campfield around the capitol building with a petition and a team of activists. Campfield had just proposed a bill that would reduce state welfare benefits for families whose children performed poorly in school. In this video by The Tennesseean, Sen. Campfield put poor parents on blast: “Every child should have a quality education and a parent who cares,” he said, implying that a parent’s inability to attend parent-teacher conferences was a sign of his or her general apathy toward education (without considering issues like the inability to take time off work or a lack of access to transportation). When asked by a fellow activist, “What are you worried about?” Fetuga replied, “I’m worried about the lights being cut off.” To which the senator responded, “That won’t happen as long as you have a decent parent who’s willing to show up at two conferences.” Fetuga and her crew continued following Campfield around the state capitol, and by the end of the day, the senator decided to hold off on the bill—at least until next year. 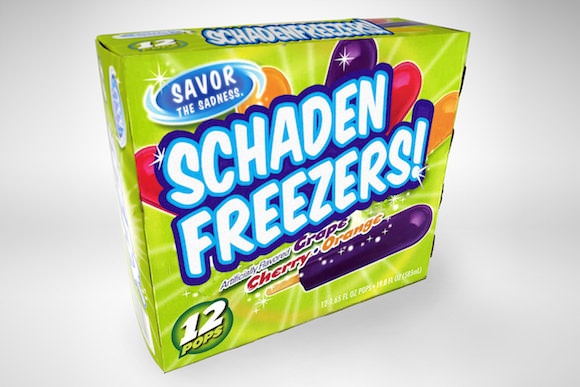 Have you, like me, ever found yourself frustrated by the terrible jokes printed on Popsicle sticks? You know, the ones that are just as boring and overly sweet as the frozen treats themselves? If so, the solution may be SchadenFreezers, a Tumblr devoted to animated GIFs of melting ice pops that reveal sticks printed with depressingly honest questions and answers like this one, which was re-posted earlier this week on BuzzFeed. SchadenFreezers are described as “the orange-, grape-, and cherry-flavored joy derived from the suffering of others.” I can’t stop looking at them and getting kind of depressed, but also totally MESMERIZED.

This pie chart, by Ann Friedman at The Hairpin, completely nails every worry I’ve ever had over period blood. Totally sad, totally true. 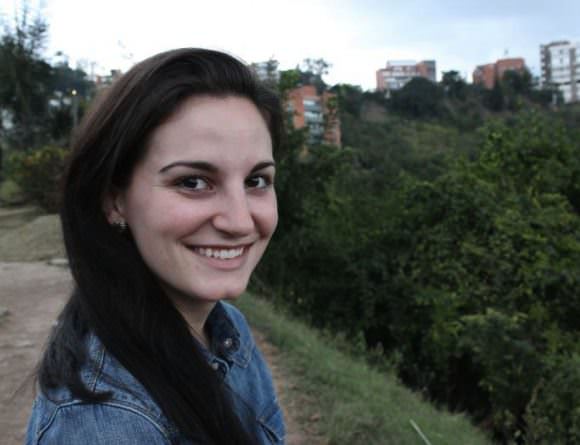 The story of Anne Smedinghoff, a 25-year-old U.S. Foreign Service officer who was recently killed by a suicide bomber in Afghanistan while delivering textbooks to a school, is a very sad one that hits close to home for me. Smedinghoff was from River Forest, Illinois, which is adjacent to the town I live in. Her story received local and national coverage, but these images from her hometown, of trees covered in white ribbons in her honor, are especially powerful. After a friend told me about the tributes, I drove around to look for them, and I found ribbons on practically every tree that lined the streets. ♦