Do you ever feel like you’re just really bad at being young?

Remember (Walkin' in the Sand) 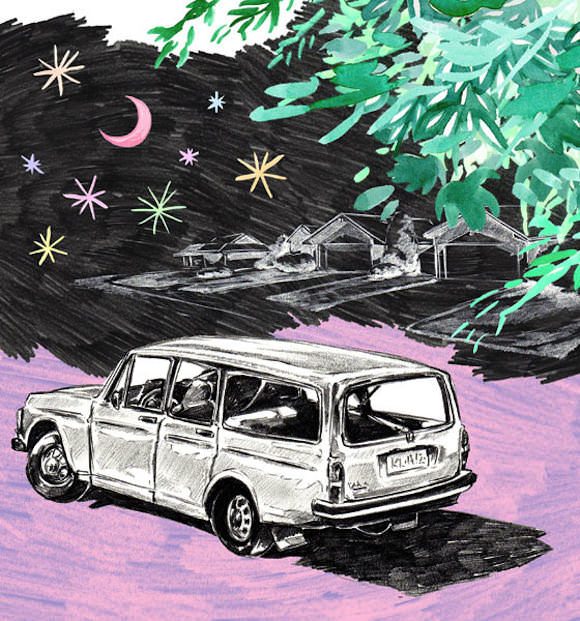 It is 12:30 AM and Glory Anderson and I are standing on the corner of my street, waiting for her neighbor Trey to pick us up in his mother’s green station wagon and whisk us away for a night of who-knows-what. My parents are sleeping in their bed seven houses up the road, and even if they wake up in the middle of the night I’m sure they won’t even think twice about the whereabouts of Glory and me, because Glory and I are Good Kids, capital G, capital K, and we’ve never given anyone any reason to believe that we’d sneak out of my bedroom window, run down to the corner, and put our faith Trey McCarthy of all people, better known in our school as “the kid with the purple pants” on account of the fact that he wears this awful pair of purple corduroy pants like every single day.

Oh god. Am I rambling? I’m rambling. I’m just nervous, you know? I’ve never snuck out before, and though I love Glory to death—she’s my best friend—I can’t shake the feeling that her plan is going to end up like the French Revolution: good intentions with terrible executions.

We hear Trey before we see him, all squealing wheels and crappy sound system. He pulls up on the corner at 12:42 and pops open the passenger-side door from his seat. He is wearing his purple pants, of course.

“Guess we should stop and get a pregnancy test at Walgreens, then,” Trey says. I laugh and Glory shoots me a look.

Glory and Trey have been neighbors since birth. Their mothers are best friends, and Glory’s father stepped in to do dad-type stuff with Trey when his dad split about 10 years ago. They act like they don’t know each other at school, even though they spend every holiday together and took baths together as babies.

“Do you even own another pair of pants?” Glory says as she climbs into the car. As soon as she’s seated she flips down the visor mirror to apply a deep red shade of lipstick.

“Do you have another ride to this party?” says Trey. “Oh, that’s right—you don’t. So shut your face.” He turns to me in the backseat. “Hey, Callie.”

“Hi, Trey.” Trey and I haven’t had a conversation that’s lasted beyond “Hey” since seventh grade, when he accidentally walked in on me changing in Glory’s room after a pool party and accidentally saw me in my training bra. Our relationship is based on mutual mortification.

“This is a really fascinating conversation,” says Glory, “but we need to leave, like now.”

Trey pulls out and speeds up the street, past my house, past my sleeping parents, past the bedroom of a girl who was now officially a liar, a rule-breaker, and, in a way that I’ve never felt before, an actual human being.

The party is at Hayley Martin’s house. Her parents are away for the weekend, and though none of us has ever risen above acquaintance status with her, we’re not worried about getting in, really. Trey gets in to every party because he always has weed, even though he barely smokes it anymore, and Glory was invited in that noncommittal “Are you going to Hayley’s party? You should go” kind of way by Bert, this kid she’s been in love with for at least six weeks. I guess love will make you do crazy things, like socialize.

Trey and Glory fight over the music in the car as I stare out the window picturing the various scenarios that may be playing out at my home: my mother frantically searching my room for ransom notes or signs of foul play; Glory’s mother standing on the steps of my house, putting the pieces together after noticing that her station wagon has gone missing; and the most likely, and somehow most unsettling, scenario: my parents, sound asleep, totally unaware that I’m not where I’m supposed to be.

We park where we’ve been told to: in an old industrial lot three blocks from Hayley’s house. Glory checks her makeup one last time and shakes out her hair. I notice that Trey is watching her, but in a nervous way, the way my mother used to watch me get on the bus for school in the morning: wistful and resigned. I don’t bother checking my makeup because I’m not wearing any. I tried once and ended up with an eye infection from stabbing myself with a mascara wand. Maybe I’ll pick it up again when I stop having nightmares where I’m a rabbit in a cosmetics-testing laboratory. I straighten my shirt and stick my hair behind my ears. That’s about as glamorous as it gets.

Trey lights a cigarette and offers me the pack.

“She doesn’t smoke, dipshit,” says Glory, stealing one for herself and stuffing it in her bag.

“Well, thanks for the ride,” she says abruptly. “I guess we’ll meet you back here at five-ish? We all need to get home before our parents wake up.” She starts off down the road, calling my name, telling me to hurry up.

“No,” says Trey, “I’m going in. We’re just not supposed to acknowledge each other at these sorts of functions.”

“I’ll meet you in there,” I say, and she throws up her hands dramatically and stomps toward Hayley’s house, toward Bert’s arms, toward her destiny, toward an entire bottle of cologne, if the stench that trails Bert down the hallways follows him off school property as well.

“I didn’t think you were a party person,” says Trey. He drops his cigarette in the street and smears it across the concrete with his sneaker.

“I’m not, really.” I don’t mention that I’m also not a sneaking-out-of-the-house person, and that I’m currently considering vomiting in the bushes in order to get the image of my parents calling 911 out of my mind.

“These things are always the same, just so you know,” he warns. “Someone pukes, someone makes out, someone cries, and then on Monday morning everyone makes it seem way more fun than it actually was to make the other kids feel bad about not being there. Same dumb shit every time.” He sounds tired, and I can’t tell if it’s a lack of sleep or an overload of living that’s worn him down.

“We’re only here for Bert,” I say, because I can’t think of anything else to say.

“That guy,” says Trey, lighting another cigarette. “He smells like a walking Hollister store.”

“That got attacked by an Abercrombie and six cans of Axe,” I add.

Trey laughs and coughs at the same time. “I have to quit smoking,” he says.

“My dad quit by using that gum,” I tell him. My dad, I think. My poor dad! He’s probably searching the backyard with a flashlight right this minute, screaming my name. My feet are walking toward Hayley’s house but my mind is back at my own.

We arrive at the front door and are greeted by Mal Peters, who yells, “Yo, Purple Pants!” and ushers us through. I see Glory in the corner, holding a red plastic cup and having what looks to be an intense conversation with Bert. I can smell Bert from 50 feet away. I have no idea how Glory can stand that close to him without her eyes melting out of her head, but maybe love gives you magical powers. I wouldn’t know.

Hayley semi-recognizes me and asks Trey if he has any weed, which he does, “free for the hostess.” She kisses him on the cheek and he looks down at his shoes. She looks at me and grins. “Your boyfriend always delivers,” she says a little too loudly, half-drunk on vodka, half-drunk on popularity.

“He’s not my boyfriend,” I say, but she’s gone, down the hall, in the bathroom with a select few and a pack of rolling papers.