Out From Under the Influence

The first time I got drunk, all I could think about was ending up like my mother. 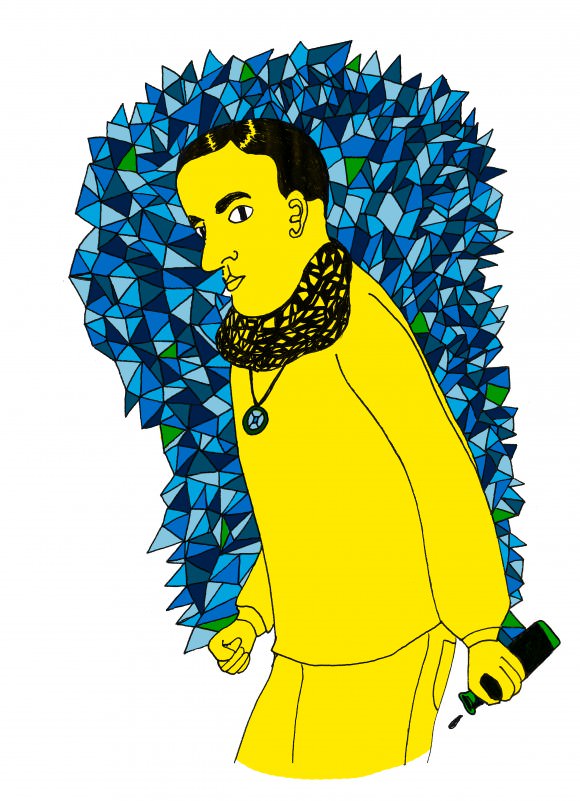 The first time I got drunk, I ended up sobbing for an hour in the arms of four people I barely knew. The five of us were huddled together on a twin bed in a dorm room after a birthday party. I collapsed into the birthday boy’s chest while the others took turns hugging me, patting my back, and murmuring words of comfort. I had known these people for just a few weeks, but I had already shared with them one of my deepest fears: would I become an alcoholic like my mom?

When I was a kid, the D.A.R.E. program came to my school and scared the hell out of me. Their weekly visits to my elementary school taught me that drugs and alcohol were terrible things that would kill me if I touched them. During these lessons, we role-played in pairs: one of us would be a “cool kid” trying to peer-pressure our partner, who would have to refuse the offer to smoke, drink, or buy drugs. “Yo!” the seven-year-old drug pusher would say. “You wanna be cool? Smoke this!” It was the partner’s job to respond, “I think reading is cool! Smoking isn’t cool!” and then, under further pressure, to start reciting statistics about lung cancer or drunk-driving fatalities or what have you.

After our very first D.A.R.E. session, I came home and saw my mother smoking a cigarette outside our apartment. Remembering my lines from that day’s role-play, I yelled at her, asking why she wanted to die. “Don’t you want to be around for my future?” I pleaded, actually shedding tears. After all, I’d just learned that smoking kills and that if you didn’t “just say no,” you were a dead man walking.

Those lessons were powerful and long-lasting: I stayed far away from drugs and alcohol throughout middle school and high school. I truly believed they would ruin my life. Little did I know that they could do that anyway—even if I was the most straight-edge kid on the planet, I couldn’t outrun their effects.

On Thursday, January 3, 2008, when I was 17 years old, I woke up to the sounds of my grandparents screaming. I jumped out of bed and ran to my mom’s room to find her in bed, covered in blood. She had slit both of her wrists, and was yelling at her parents, “I tried to kill myself! Can you believe I tried to kill myself?!” I remember feeling paralyzed for a moment as I stood in the doorway watching all this, trying to make sense of what was going on. Then I ran to the bathroom, grabbed some towels, and brought them to my mother’s bed. I wrapped them around her wrists and squeezed hard, trying to slow down the bleeding, and yelled to my grandparents to call 911. They refused, saying they wanted to give my mother a shower and then take her to her regular doctor—they’d come over that morning to take her to an appointment that she was too sick to drive to on her own.

I’d soon learn that “too sick” meant she’d been on a bender, drinking to the point of vomiting for three days straight. In fact, she’d been drinking heavily for a year at that point. I had no idea—she had always been a casual drinker and drug user, but she hid her drinking from me. It couldn’t have been too hard—I spent 10 hours a day at school, summer camp, and winter camp, so a lot went on that I didn’t see.

I was outraged that my grandparents wouldn’t call an ambulance. After arguing with them fruitlessly for a few minutes, I asked my grandfather to take over the bleeding control, then I grabbed my phone and made the call. I stood in the dining room talking to the dispatcher, who asked me if my mother was taking any medications (I didn’t know), then told me to look for a suicide note. I ran through the house, scanning every surface, looking on and under furniture, in drawers, on the bathroom mirror, where my mother often taped notes to herself, and on my bedroom door in case she’d taped it there. The whole time I kept thinking, I can’t believe I’m looking for my mother’s suicide note. This feels like someone else’s life. (I never found a note, because she didn’t write one.)

Before I knew it, there were at least six firemen and paramedics in my house. They put my mother on a stretcher and carried her out of the house. I chased after them with a pair of socks, because I knew her feet were going to get cold in the hospital. My grandparents decided to stay behind and clean the house, so I insisted that the parademics let me ride to the hospital with them and my mom. When we got there, I was forced to go in through the front entrance while they took my mother in through the back. I sat alone in the empty waiting room, numb and scared. The hospital receptionist called me over to fill out insurance paperwork, which I had no idea what to do with—how was I supposed to know my mom’s Social Security number? I was so anxious that all I could do was alternate between curling up in my gigantic Ravens sweatshirt and pacing around the waiting room. By the time my grandparents got there, I was too overwhelmed to speak to them, or to anyone.

We waited at the hospital all day before we were allowed a brief visit with my mother, who had sobered up by that point. She confessed to me that she was an alcoholic, and promised to get help. That calmed me down a bit, but I wasn’t ready to return to our house, so I had my grandparents drop me off at my best friend’s place, even though she was out of town. Her parents answered the door and I heard my grandparents’ car drive away. Then I broke down and cried for the first time all day. I spent the rest of the night zoned out in front of their TV, holding my favorite stuffed animal, Spot, a dalmatian my parents had given me when I was two years old.

My mom spent the weekend at a detox center, where I only got to see her once, for about five minutes. She came home on Monday, my first day of classes after winter break. I went to school acting as though nothing had happened. Everyone around me was chattering about all the exciting stuff they’d done over break. “OMG, how was your break?” they’d say. “I went to [insert fancy destination here]. It was amazing. What’d you do?” Hmm, well, my mom slit her wrists, I helped stop the bleeding and sat in the hospital for a full day, then I spent the weekend searching my house for secret drug or alcohol stashes while my mother was in a detox center that I was allowed to visit only once, for five minutes. Happy New Year!