“I felt like the most ill-equipped teenager out there.” 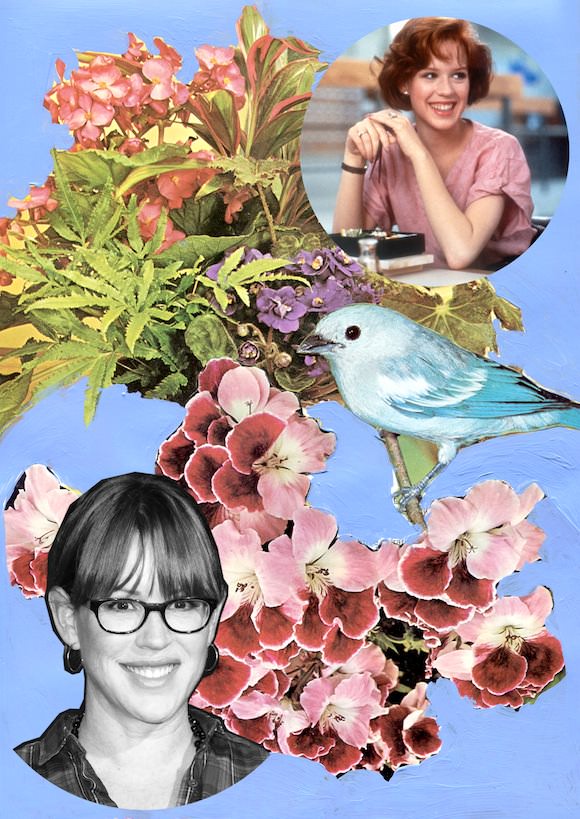 A few months ago I got a really nice tweet from Molly Ringwald. I was very excited, because I admire her and have kind of always wanted to be like her. I asked her if I could interview her and she said yes, so I avoided her for a month. Sometimes when I really admire someone I’m afraid to talk to them because I don’t want to embarrass myself. My dad told me I was being crazy and kind of rude so I emailed her and set a time for us to talk.

Molly Ringwald starred in some of my favorite films, including Sixteen Candles, The Breakfast Club, and Pretty in Pink. She’s also done a lot of theater, and right now she’s on The Secret Life of the American Teenager on ABC Family. Not content to limit herself to an amazing three-decade-long acting career, she’s also written two books (Getting the Pretty Back and When It Happens to You); and last week she released her first jazz album, Except Sometimes, which includes a great rendition of “Don’t You Forget About Me,” the song that plays during the opening and closing credits of The Breakfast Club.

I met Molly at R+D Kitchen in Santa Monica, and I immediately ordered a water because when I am nervous I drink water so it looks like I am doing something. She is so nice and cool, though, that she instantly put me at ease. She is actually so much more than cool but I can’t think of a more apt word to describe her. After the interview she told me she didn’t have a ride home, so my dad and I drove her. I forgot why she needed a ride but I am so glad she did, because I got to spend another 15 minutes with her. Now I know where she lives, but I won’t tell you. Actually I already forgot. Here is my interview with Molly Ringwald.

MOLLY RINGWALD: So, have you done a lot of these?

MAUDE APATOW: Not really. I get so nervous, I feel like I’m acting so crazy.

Don’t worry about it.

Was it fun to make that?

Yes! My dad’s a jazz musician, so I grew up singing jazz—I did that before I did anything else. It was like coming back to my roots. Do you sing at all?

I do, yeah. I do the school musicals.

Weren’t you in Annie? Was that your first acting job?

That was actually what kicked me into acting more than singing. Somebody heard me sing and suggested I try out for Annie, which was doing its first West Coast production. I was 10 years old and listening to the soundtrack all the time. So I flew to L.A. to audition.

It was an open audition—you know, one of those huge cattle calls. It was exciting, but I was really shy when I was a kid—I mean, I’m still kind of shy. The only time that I wasn’t shy was when I was on stage. I was so nervous to be around all these other girls [who were auditioning]. We started out with all these [girls], and then it kept getting narrowed down over and over and I kept making the cut every time—toward the end [of the process] I think I would have been devastated if I hadn’t gotten the part. That’s why I think acting is so hard on kids. I mean, it’s hard on anyone, but especially kids.

What do you think about letting kids act?

Well, I have three kids, and I won’t let them act for exactly that reason. I feel like there’s a time when kids should just be able to be kids and be adored by everyone. And, you know, acting is really a business. But of course my eldest daughter is nine and that’s all she wants to do. Sometimes I think I’m kind of pushing her to be an actor by denying her the right to do it. [Laughter]

When you started acting, were you put in situations where you were the only kid around?

Yeah, I was always the youngest person around. For years.

How did that feel?

I loved it. It was hard for me at the time to relate to people my own age. That was sort of ironic: I became sort of like the “every teen,” representative of all teen America, but I felt like the most ill-equipped teenager out there. There were a couple of years when I was terrified to be around kids. Kids are mean!

That’s how I feel—I’ve been around so many adults that it’s scarier being around kids.

How old are you?

Right, so you’re sort of getting out of the really mean stage. I think like 13, 14 for girls is the worst. I was terrified of them. And I don’t know if it’s the same now, but when I was acting during that time, it inspired so much envy and jealousy and teasing, you know? I had a tough time in school. But then later I just got so confident from what I was doing outside of school that I didn’t really care what they thought.

Do you ever fight with them?

You know, I think sisters just do that. We were a very close family, but looking back on it I think [dealing with my success] was hard for [my siblings]. My sister was more vocal about how upset she was about it. Because she was basically like Claire in The Breakfast Club. I kind of based a lot of stuff [for that character] on her—not her specifically, but just in that she was a really popular girl in school. She was very well-liked, and she was considered a “sosh”—that’s what they called it in her school. And I never felt that way—my closest connection to popularity was my sister. So to go from being the most popular girl in school to then having a sister who is like the most popular girl in the country—she didn’t know how to handle it. And my brother just felt kind of invisible, you know? It’s hard. It kind of messes with the balance of the family.

Yes, actually I brought them for you!

[Pulling books out of her bag] I brought Getting the Pretty Back for you. It’s really for somebody older than you, but the pictures and a lot of the bits of advice are really fun. And I thought your mom might like this one. [Hands over a copy of When It Happens to You]

Well, first of all, you get to play all the parts, which is great. And coming from a long career of having to do what other people tell me to do, it’s nice to have control over what you’re making. I think [writing is] the most pure expression that there is. No one else really does anything to your work. I mean, they edit you, but they’re all suggested edits, so I don’t have to take them if I don’t want to. If you’re acting in somebody else’s movie, even though you can contribute and you can ad-lib and have opinions, ultimately you’re not the creator.