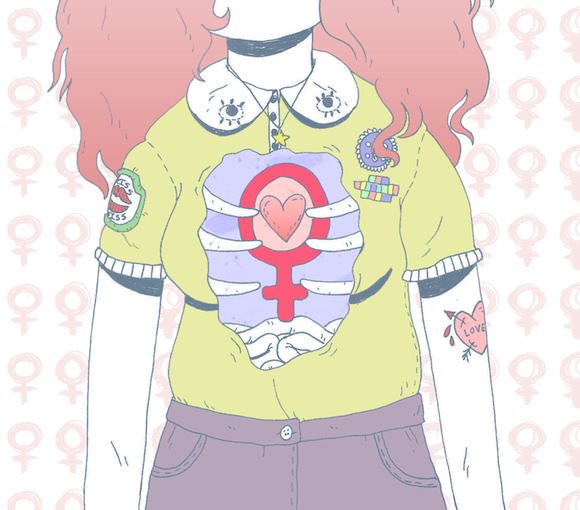 I’ve always been apprehensive about milestones. When I got my period for the first time, I did not burst out in Judy Blume–worthy tears of joy, I cried in horror. Bye, childhood, I thought, FOREVER. It’s been fun, but now I have to go do adult things, like my taxes and laundry. Also, wow, I’m really articulate for a 12-year-old. The truth is that getting your period doesn’t make you a woman. Neither does having a bat mitzvah or a quinceañera or a sweet 16. There is no definitive moment where you wake up and trade in your novelty-print romper for a beige pantsuit and feel ready for every conceivable responsibility, because maturing is a lifelong process.

I’m 19, which means I am no longer legally a child, but I’m still a teenager, and I personally can’t abide the thought of myself as a full-fledged adult. It’s not that I’m afraid of growing up—I’m just not exactly skipping down the path to maturity. I consider part of me grown up—the part that works multiple jobs, goes to college, takes care of sick family members, and successfully orders a pizza over the phone without anxiety (FINALLY). The other part of me is a total kid. I like Hey Arnold! and clothing emblazoned with baby animals. Sometimes I feel like I should cover my own eyes during sex scenes in movies. I have a desk drawer devoted to glitter and food-shaped erasers, and I can’t seem to ask a stranger for help without raising my voice a few octaves. Yes, I wear adorable vintage glasses and enjoy baking, but I also vote. Like my fellow Rookie Danielle said, just because I’m childlike doesn’t mean I am childish. I’m not a girl, not yet a woman.

When I started college this year I made some new friends, and what began as good-natured teasing about my quirkiness (a word I’ll come back to in a bit) started to feel like a dig after a while. Quirky seemed to apply to anything I wanted to do, from baking a pie to trimming my bangs. A couple months ago my (admittedly delightful) dorm room was featured in Teen Vogue. My campus blog wrote what I’m sure was meant to be a flattering nod to the piece, but when they said I was “majoring in adorable,” I worried that I was being mischaracterized as a silly person with a frivolous interest in style. Around that same time I told a friend about my plan to work at a bakery so I could wear cute aprons, and she didn’t take it as the joke I intended it to be. “Don’t manic-pixie yourself,” she warned.

She was referring, of course, to the trope of the Manic Pixie Dream Girl, a recurring character in film and television. The MPDG is an adult woman who embodies a youthful free-spiritedness that many find grating. The term was coined by the film critic Nathan Rabin, who described her as “that bubbly, shallow cinematic creature that exists solely in the fevered imaginations of sensitive writer-directors to teach broodingly soulful young men to embrace life and its infinite mysteries and adventures.” He cites Kirsten Dunst’s character in Elizabethtown and Natalie Portman’s in Garden State as two prime examples. Other common traits of MPDGs: a tendency to wear vintage clothing, a playful personality, an interest in minor disturbances of the peace, and, oh yeah, no inner life or ambitions of her own. Also, they’re usually waifish and pale and big-eyed and adorable (probably they majored in it). (This video breaks the trope down perfectly.) I’d read about MPDGs in a few articles and on a few blogs, and then started seeing the term in internet comments and Instagram bios. And now it had become a real-life thing, and it was being applied to me.

On a purely superficial level, I guess you could say I match the description. My haircut is very similar to that of Zooey Deschanel, an actress who is often blasted as the MPDG poster girl. And to be honest, before I really thought about what the MPDG archetype means in terms of women and agency and all that, I was as obsessed with them as their love-struck suitors tend to be. They dress whimsically, like to have fun, live in adorable apartments, go on dates, and did I mention FUN? In middle school, when I watched Stranger Than Fiction, a 2006 movie in which Maggie Gyllenhaal plays Ana Pascal, a kooky baker who runs a “weekly evil-conspiracy and needlepoint group,” I didn’t hate her like a lot of people did—I wanted to be just like her. And I’ll admit that I coveted Zooey’s perfect bangs and her wardrobe of retro cotton dresses in (500) Days of Summer. (SIDE NOTE: If we’re going to play Six Degrees of Manic Pixie Dream Girl, I believe the movie Elf from 2003 subverts the phenomenon: Will Ferrell plays a totally whimsical man-child who shows the jaded, deadpan Zooey Deschanel [!] how to loosen up and enjoy life. But it was released several years before the MPDG was identified and analyzed to death.)

But just because I like cute stuff doesn’t mean I’m shallow, or that I live to make guys feel more adventurous and deep. For example, I would never ask a guy to lie down in the street with me and look at the stars, because I don’t want to get hit by a car. I’m way too cynical to ever fall in love with a boy over a mixtape. And to be honest I find cupcakes kind of stupid. (I get the convenience factor, but prefer cake slices, which give you an even distribution of frosting and cake in every bite.)

My point is, likening real-life women to MPDGs is offensive. It implies that our habits and interests are affectations designed to attract dudes so we can improve their lives. The Manic Pixie Dream Girl does not actually exist—she is by definition a fantasy. We should restrict the use of the phrase to when we’re criticizing one-dimensional characters in fiction. Otherwise it’s just another way to put women down. Calling an actual living girl an MPDG because she likes traditionally domestic things like baking is akin to calling a girl a bitch because she’s confident or a slut because she enjoys sex. It’s just a derisive, limiting label, often delivered as the euphemistic Q-word. “Oh, what’s that? You crochet small replicas of fruit? How quirky!” (Never mind that crochet is an interest you’ve had since you were little and that brought you closer to your grandmother.) “You’re wearing that polka-dot dress again? Your style is sooo quirky.” “Whoa! You’re eating yogurt? Quirky! I have no idea why, but you have pink streaks in your hair, so I’m just assuming.”

There are many things I do that no one would describe as cute, including: interrupting people midsentence to share my opinion, being judgmental, and writing furiously on feminist themes in Sei Shōnagon’s The Pillow Book. And I don’t really want to let go of some of my twee-er tendencies like figuring out how many ways I can incorporate Funfetti cake mix into my diet or embroidering portraits of my favorite pop stars.

Maybe one day I’ll have nothing but black turtlenecks in my closet and green juice in my fridge, who knows? In the meantime, though, I’m not bad at being a woman (or a feminist) if I’m not embodying the refined courage of Eleanor Roosevelt combined with the fierce independence of Beyoncé combined with the physical strength of Xena: Warrior Princess. My tastes are not designed to attract disaffected men whose lives lack zing. They’re definitely partly an attempt to cling to my childhood—or, more precisely, to hold on to my enthusiasm for life. But honestly, who cares? If I want to be curious and goofy and make crafts, who’m I hurting? I’m not “manic-pixie-ing myself,” so please don’t manic-pixie me. ♦