Literally the Best Thing Ever: The Cosby Show

I even liked Sondra, the boring one. 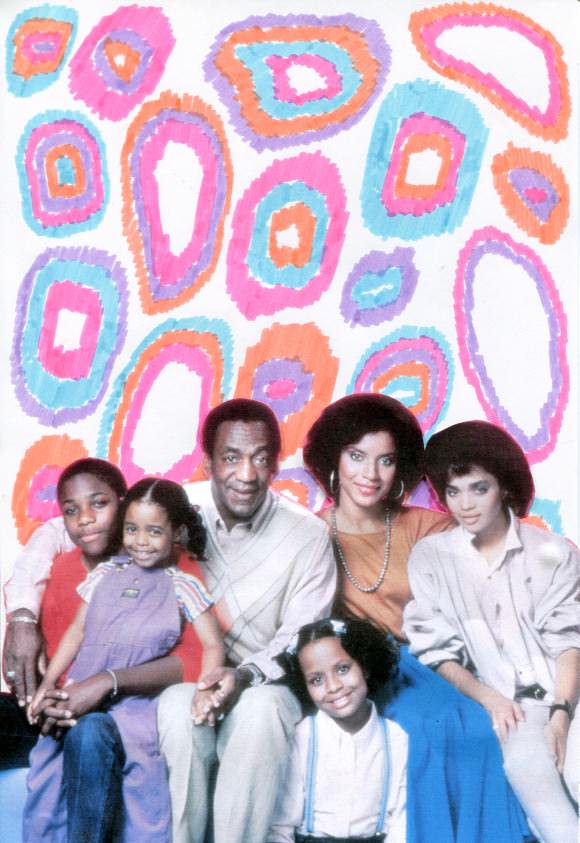 During my college years and for a few years after, I was a regular at a place in Washington, DC, called Ben’s Chili Bowl. While my main motivations for dropping by the restaurant—usually in the wee hours of the morning, after a night out—were greeting the staff while I ordered my usual (one chili-cheese half-smoke and a side of chili-cheese fries) and playing Marvin Gaye on the jukebox while I devoured it, I have to confess to a third, ulterior, motive: I always hoped I’d run into one of my heroes, who was such a frequent diner at Ben’s that there was a sign next to the cash register announcing that all customers had to pay for their food, except one: Bill Cosby. (In 2008 a new sign was erected: “Who eats free at Bens: — Bill Cosby — The Obama Family.”) Cosby loved the restaurant so much that he chose it as the site of a press conference he held in 1985 to announce and celebrate a career milestone: his sitcom, The Cosby Show, then in its second season, had reached #1 in the ratings.

I was five years old that year, and I remember my parents’ excitement over The Cosby Show. They loved it primarily because it was funny, but also because it was the first show on TV that centered on a happy, healthy, intact, upper-middle-class, bourgeois black family—a family like ours. Before The Cosby Show, there were other shows—many of them truly great—about African-American families: sitcoms like Sanford and Son, Good Times, and What’s Happening!! were all enormously popular in the 1970s, as was The Jeffersons, which ran from 1975 to 1985. But those first three shows centered on single-parent families living in poverty; and the last one was about a poor couple who became rich, and much of its humor came from watching them try to adjust to their new, largely white milieu. The dominant narrative of black family life on TV was one of struggle. And for good reason: the dominant narrative of black family life in America was, and is, disproportionately one of struggle. But The Cosby Show was the first thing on TV that reflected my life, and that meant the world to me.

If you’ve never seen the show, I recommend you change that ASAP—it’s on Hulu Plus and DVD. It focuses on the Huxtables, a family of seven living in a two-story brownstone in Brooklyn Heights. The parents, Cliff (played by Cosby) and Clair, are a doctor and a lawyer, respectively; their five kids provide the usual challenges but are basically smart, loving, and successful. Every Thursday night from September 1984 to April 1992, my parents and I (and up to 30 million other Americans) followed their trials and triumphs—some big, most small, almost all hilarious.

The Huxtables—they seemed so much like so many of our friends and relatives that as a kid I often imagined I was part of their clan. I would picture myself at the dinner table laughing along with my two favorite Huxtables, free-spirited Denise and Rudy, the youngest kid, who was exactly my age on screen and in life. (I went to a mostly-white school, and I remember classmates’ parents and random old white people I’d meet in airports would sometimes come up to me and say things like: “You are so articulate and cute, you remind me of that little girl on The Cosby Show!” This bothered me for a couple of reasons: first, I bore no resemblance Keshia Knight Pulliam, the girl who played Rudy, beyond the color of our skin; and second, these people seemed to find the idea of an intelligent black kid so exceptional that they couldn’t help grouping together the only two examples they could think of.)

I envied Rudy, though, because while I was an only child, she got to hang out with Denise and Theo, the older siblings of my dreams. I longed to borrow Denise’s cool clothes (without getting busted like Vanessa), sleep over in their dorm rooms, and crash the fun yet relatively wholesome parties they threw at the family home with Cliff and Clair were away.

I even liked Sondra, the eldest and most boring Huxtable, who most people forget about because she was just that boring.

But Vanessa, the fourth child, was the character I simultaneously liked the least and related to the most. My mom and dad, like Clair and Cliff, were super strict about grades, homework, and manners; and, like Vanessa, I felt a powerful obligation to honor how hard my parents and grandparents and people whose names I’ll never know fought for my access to a good education. This pressure resulted in an often painful level of perfectionism in both of us. I felt Vanessa’s pain when she got a D on her history test and understood the fear and shame she felt about performing poorly in school.

Another awesome thing about The Cosby Show was the music. I eagerly awaited the opening of each season premiere, so I could hear the latest interpretation of the intro song, which went through Afro-Carribean, jazz and hip-hop versions. And the musical performances were the best! Here’s one from my favorite episode, where the Huxtable family performs a rendition of Ray Charles’s “Night Time Is the Right Time,” my favorite episode.

Easily as thrilling as these musical selections was tuning in to see which of his staggering collection of quirky and colorful sweaters Cliff would wear that week. Just a sampling: 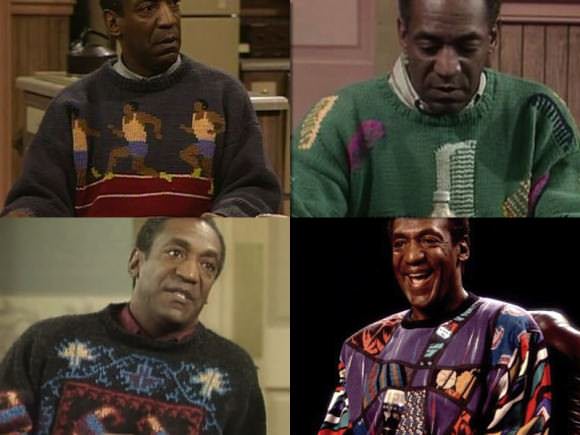 The Cosby Show paved the way for A Different World, Family Matters, The Fresh Prince of Bel-Air, and Living Single, among others—sitcoms about strong, functional, thriving African-American communities and relationships that became part of a wave of black entertainment that hit network television in the late ’80s and early ’90s. (That wave also included a In Living Color, the first primarily black sketch comedy show on network TV.) Every year there were more African-American stories on TV, reflecting a wider swath of black experiences. And these were shows everyone was watching. Cosby was the #1 show in the country for five years straight. It felt like the momentum of progress; it felt inevitable that by now TV would be filled with all kinds of shows about all kinds of families and relationships among people of all races and classes and backgrounds, and we’d all be watching them. I looked forward to this day eagerly.

Sadly, it never came. Today television viewing is as segregated as it’s ever been. The last TV show with a predominantly black cast to crack the top 10 in the Nielsen ratings was A Different World, the Cosby spin-off that went off the air 20 years ago. This list of the most popular programs in 2013 will show you how far backwards we’ve slid since then. This is partly because the massive success of overwhelmingly white shows like Seinfeld and Friends made network executives less likely to green-light black shows, which migrated to Fox, the WB, UPN, and TBS, fledgling cable networks that were positioning themselves as niche programmers specializing in black entertainment for black audiences. It supposedly came down, as so many of these things do, to money: the networks were fighting for the eyeballs of rich teenagers—not a population known for its careful spending habits—and the biggest chunk of rich kids they could see were white. Never mind that white people loved those black shows—the people in charge of television have could never be accused of overestimating the public. Which explains not only the dearth of varied, mainstream depictions of African-American life on American TV, but also the fact the last time we saw teenagers’ lives depicted in anything close to a realistic way was on Freaks and Geeks and My So-Called Life, which were also, coincidentally, canceled in the ’90s.

I’m heartened by and thankful for the success of the web series Awkward Black Girl—I hope this is just the beginning of a long, wildly successful career for Issa Rae, and that her success goes on to spawn another wave of black entertainment so powerful that it undoes the damage of the past two decades. Meanwhile, I miss those years when we were all sharing our stories with one another, and all happy to take each other’s stories in. I miss being able to turn on the TV and see a reflection of my own life that was so familiar I thought of the characters as family. These shows made me feel more seen and understood, and less alone in the world, and that’s important. ♦