Literally the Best Thing Ever: The Lonely Doll

My obsession with Dare Wright and her complicated creation.

What I Wish I Knew About My Period 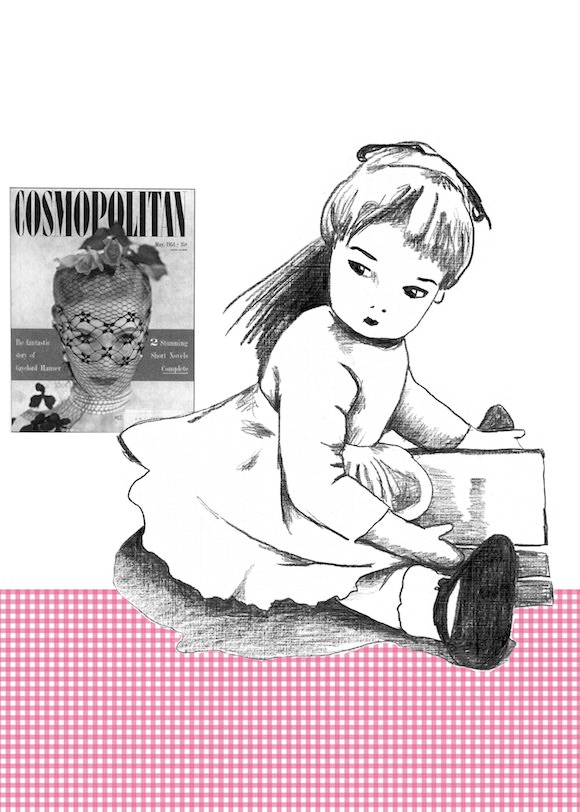 Have you heard of the The Lonely Doll? For my birthday one year, my friend Drew presented me with a reissued copy of A Gift From the Lonely Doll and these solemn words: “You need this book.” It was one in a series by the late photographer/author/model Dare Wright, the first of which was originally published in 1957 with a trademark pink-and-white gingham cover. The story was told via beautiful black-and-white photographs of a curious doll named Edith and her teddy bear friends, Mr. Bear and Little Bear.

Like so many children’s books, A Gift From the Lonely Doll was an aching mix of absurd and profound. But there was also something unsettling about its images of dolls come to life. Why was this little doll knitting a scarf for a stuffed bear? Why did she have to go shopping for the yarn in the city all by herself? Why was her skirt so short, and why was she so frequently photographed from behind? My first flip through the book stirred a sense of strange familiarity—I intuitively understood this peculiar universe, yet it creeped me out and left me wanting to close the book and back away, kind of how I felt as a kid after watching too many Twilight Zone episodes on a Sunday afternoon. When Drew pointed out the author’s photograph on the book jacket, I got quiet. Dare Wright looked exactly like little Edith.

I was raised on the anthropomorphized animal worlds of Beatrix Potter, Rupert Bear, and the Flower Fairies, so it was hardly a stretch for me to imagine this lonely doll leading a sophisticated life in New York, smartly dressed and sitting down to a fancy dinner, or taking the train to the country with plenty of luggage. But I was haunted by the settings and the scenery, which were oddly still yet kinetic at the same time. Like Edith, I was often alone in the house, usually during summer’s endless days of nothing. Sometimes my dad would be gone for weeks on end, my mom would be at work or ballet classes, and my brother was forever out having his own adventures. I would stay put, close to home, playing with dolls until an age that seems inappropriate. I was already 11 when Cabbage Patch Kids became a thing. Mine looked like me, with long brown hair made of yarn, blue eyes, a denim smock dress, red tights, and white Mary Janes; I dedicated an entire corner of my bedroom to her (she had, among other things, her own crib). As a kid, I always made things for my toys—shoebox houses, furniture for the shoebox houses, and tiny little wardrobes. I once sewed an elaborate quilt for a ratty old koala bear souvenir from Australia. Here, in her book, Dare turned this childhood activity into an art form.

Shortly after my birthday, I decided to pack up and move to an isolated, snowy region of Canada, so all my books were sent to storage, where they stayed for seven years. I had all but forgotten about the Lonely Doll series until five months ago, when my friend Amanda said, “You have to read this biography of Dare Wright. Take my copy, now.”

In The Secret Life of the Lonely Doll: The Search for Dare Wright, author Jean Nathan explains that Edith was named after Dare’s mother, who gave her daughter the felt Lenci doll when Dare was just a child. Years later, Dare unearthed the doll from a trunk, and like Edie Sedgwick to Andy Warhol, little Edith became Dare’s blank slate. She created a blonde wig for her, added small gold hoop earrings similar to her own, and dressed her up in a pink-and-white gingham outfit that she’d made by hand. Soon Edith came to bear an uncanny resemblance to the photographer herself. The side-eye of the Lenci allowed her expression to go from quizzical and innocent to complete bitchface with a slight change of perspective, and Dare proceeded to depict little Edith in a variety of scenes: opening the door to greet the two bears, brushing her hair while gazing into a mirror, hanging out at the beach, standing at the foot of the Brooklyn Bridge, dressed up as hippies protesting city pollution, tied up to a tree and gagged—YES. A few spreads were even more disturbing, an oft-cited one being the climax of the original volume, which finds Edith being spanked by the elder of the two bears for dressing up in lipstick and high heels. That, taken with the fact that little Edith’s eyelet underwear was often suggestively peaking out, adds a psychosexual element to the book: titillation and shame wrapped together in a story designed for children. (You can understand why mothers who remember the book fondly, like Kim Gordon, once they’d revisited those pages as adults, thought twice about getting the book for their daughters.) 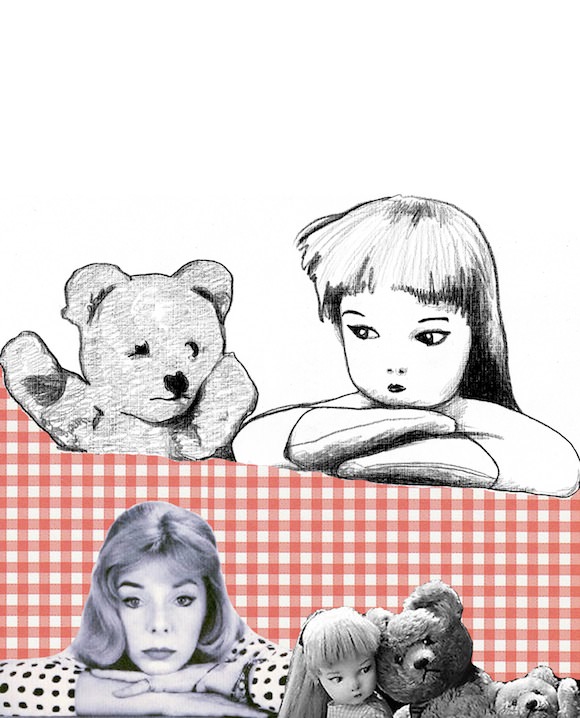 Like the biography suggests, the story behind the stories is a whole other story—a true gothic tale. On the surface, Dare’s life was super glamorous. Her mother, Edith (aka Edie) Stevenson Wright, was a successful portrait painter for whom dignitaries and celebrities like Dwight Eisenhower and Greta Garbo once sat. Dare was intelligent and beautiful, and Edie taught her how to paint, draw, and sew. A high school teacher pushed her into acting and then modeling, but she became interested in the camera, and soon became a fashion photographer for Vogue and Harper’s Bazaar.

But I hesitate to call the Lonely Doll books the Best Thing Ever. Because the portrait of Dare that emerges from Nathan’s biography is of a sad and troubled woman. Growing up, Dare felt the absence of her father and her brother, whom she’d last seen when she was three and her parents divorced. Her mother retained custody of Dare, but she worked a lot, and Dare was left home alone with instructions to “keep the door locked” for hours on end. Edie dissuaded Dare from making friends, and the two often played dress-up, photographing each other in gowns and other outfits, and Edie encouraged Dare to pose nude during their summer vacations (in other accounts, it is Dare who orchestrated these shoots, while Edith merely clicked the shutter). Dare eventually reconnected with her brother, Blaine, and was briefly engaged to one of his friends, but the bio suggests her affections were directed toward her sibling, and that their relationship was intense and “highly charged.” Dare remained close to her mother—they often slept together when they stayed at Dare’s apartment in New York, or on their many vacations. After Edie died in 1975, Dare became a recluse and an alcoholic. According to Nathan, she may have remained a virgin all her life. She was reportedly raped by a stranger when she was about 80; after that she moved into a public hospital in Queens, New York, where she lived out the last six years of her life. She died in 2001 at the age of 86.

Dare’s friend and estate executor, Brook Ashley, disputes most of the above information, and says Nathan misrepresented other parts of Dare’s life—her affection for her brother, her closeness with her mom—to make the story more sordid. With Dare gone, it’s tempting to read the Lonely Doll books as a message from her. Is the absence of a mother figure in the books a subconscious expression of resentment? Was Edith the doll a fusion of mother and daughter (Edie often signed letters “Edie-Dare”)? We’ll never really know for sure, but the best thing about the series, and all great art for that matter, is that it exists for us to interpret.

I relate to the books for many reasons, and though I rarely long for things, I want to collect all 10 in the series. I’ve scoured the internet and put my name on waiting lists at rare bookstores. To me, they’re as beautiful, compelling, and haunted as Francesca Woodman’s self-portraits from her own short life. And, also: I love dolls. In 1995, I started making little bunnies out of angora sweaters, inspired by a knitted rabbit that my own mother had brought home from the thrift store one day. It had the most frustrated face, and we named him Fierce Bunny. Like some mothers and daughters, and perhaps Dare and Edie, our relationship was at times sororal, but not in the quippy, fun-loving Gilmore Girls way. We were close, and she took me shopping and helped me with my sewing, but our relationship was always fraught—we argued a lot, and I was always a little afraid that we’d turn into Big Edie and Little Edie from Grey Gardens (we already had a house full of antiques and junk).

Could someone find meaning in my bunnies, and read into them a story of dysfunction or repression or depression? I’m sure. In some ways, they already have a life of their own (one popped up in an M83 video—I have no idea how or where the director found it). But art gives us the power to transform our lives—the grossness, the discomfort, the memories—into something else. We are, all of us, always and forever trying to repair our own childhoods. ♦