When We Were Young 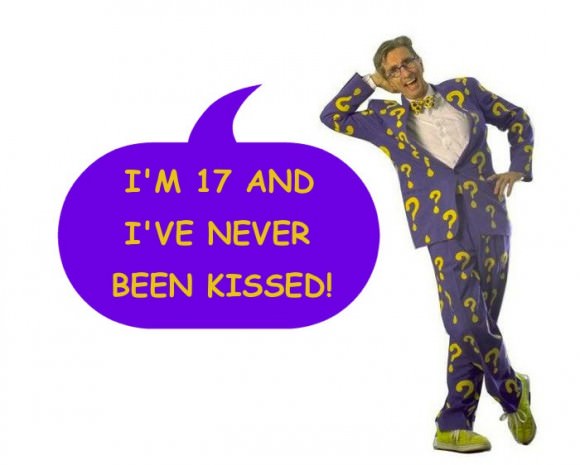 Hi Rookie! You guys often write about dealing with unwanted male attention, but I’m suffering from a lack of any kind of attention from guys. :/ I’m 17 and I haven’t had my first kiss yet. You also give a lot of advice for people who “get started” early (Amy Rose’s article “Have It Your Way,” for example) but not so much for “late bloomers” like me. Is there any advice you can offer to help me and my brethren deal with our nunlike existences, and possibly put an end to them? Thanks a mil! —Jen

When Anaheed sent me your question I was alone at a McDonald’s at 1 AM after a very disappointing night with a dude. THE IRONY OF ME GIVING ROMANTIC ADVICE. Anyway, here you are.

First of all, I propose getting rid of the phrase “late bloomer,” ’cause it implies that there is a “right time” when a girl is supposed to “bloom,” which is a pretty gag-inducing metaphor when you come down to it. One of the trickiest things I’ve had to learn—and this applies to sex, but also to other milestones or experiences—is that if you start comparing your progress with everyone else’s, you will drive yourself nuts. Everyone is different! There are lots of really amazing people, including several Rookie contributors, who didn’t have their first kiss or lose their virginity in their teens. My own first kiss was an anticlimactic mess during a game of truth or dare when I was 16, and I still didn’t have my “real” first kiss until way later. Let me shout it from the rooftops: whether you’re having safe sex with a different partner every week or have never been kissed, there is nothing wrong with you or your life’s timeline.

That being said, there’s nothing wrong with craving more sexual experience for its own sake (rather than to “catch up” with your friends). I didn’t date AT ALL in high school, and then very little in university for a variety of reasons (I was shy, I was studious, I was a straight woman who hung around with mostly other women) but that didn’t stop me from thinking about sex, like, all the time. It wasn’t until I was in my 20s that I realized that pursuing the person I’m interested in doesn’t have to be scary. The first step to ending up in Makeoutville really comes down to, as cliché as it sounds, talking to people. Even if you don’t think you’re into someone right away, your opinion of them can change after just having a conversation (there are dudes that I thought were SO BORING until I got to know them and realized they were pretty awesome, and vice versa). If you still aren’t attracted to anyone in your social sphere, go out and meet new people. When I was in high school, I assumed that “going out” meant venturing into some seedy club downtown with a fake ID. But if that’s not your scene—it definitely wasn’t mine—make whatever you’re interested in into a social activity. Do you love movies? See if there’s a film club at your school, or an indie theater that screens cult movies. Are you into video games? Maybe there’s a video game meetup in your area. Dog lover? Volunteer at your local shelter. Etc. Putting yourself out there and introducing yourself to strangers can be scary, but the worst-case scenario is you meet a bunch of people who share your interests.

Last but certainly not least, if you are interested in sex but just haven’t found the right partner, learn to love yourself. Literally. Masturbation is a fun, safe way to get comfortable with yourself and debunk some of the apprehensions you might have about sex. Ultimately, exploring your sexuality should be fun. Putting too much pressure on yourself will just make things needlessly stressful. Put it this way: do you want to go out and smooch boys for the inherent pleasure that comes with smooching, or do you want to go out and smooch boys because you feel that’s what you should be doing and you want something to talk about with your friends? If the former is true, then go forth and smooch. Good luck, and have fun. —Anna

Every Friday night I play Dungeons & Dragons with the four most amazing boys. It’s really not as nerdy or weird as it sounds—these are legitimately the coolest guys you could ever meet, and their letting me into “the guild” was the result of two years of hard work on my part. But (there’s always a but) I guess it’s impossible not to hang out with the opposite sex in a dungeon-like basement once a week, into the early hours of the morning, without something happening. I’ve very much taken a liking to one of the boys, but, alas, he has a girlfriend (sigh). During our last two D&D nights we sorta started…touching…and kissing… I really, really like him, he’s sorta perfect, and really nice and gentle, but I’m afraid that our thing will upset the group that I worked so hard to become a part of, and I’m scared that he’s just using me, that these kissing sessions more to me than they do to him. I feel like there’s at least something there, but I don’t know what to do—should I pursue him and risk expulsion from the guild, or keeping playing with them (and letting him play with my heart)? —Stella

Strategizing matters of the heart can be tricky, but let’s try to break down your situation:

Goal #2: Make out with this cute boy as much as possible.

Goal #3: Don’t get your heart broken.

The question is whether these goals are mutually exclusive. I don’t think they are, but you’re right to be thinking strategically here, because if you make your move on this boy, the consequences aren’t going to be entirely within your control. Your status as a guild member could definitely suffer if you attempt to date within the group, especially since you’re the only girl and the newest member. You worked hard for your induction, and right now you’re a free agent and a full-on member; you don’t want to be demoted to just X’s Love Interest. Nor do you want to inadvertently communicate to the other guys “I’m just here because X is here, and I’m in love with him, and the rest of you are just extras in our D&D love story, ‘D20: The Arcane Seduction.’” OTOH they are your friends, and they might just surprise you with how friend-like and supportive they can be if you do get your heart broken. Then there’s the matter of this guy’s girlfriend. It’s not really your responsibility to figure out their relationship (it’s their business, not yours), but since it affects you, it would be wise to get an idea of their deal before you disclose your feelings. Maybe ask him something vague, like, “What’s [girlfriend’s name] like?” Maybe he’ll say something really telling, like “Things used to be nice between us, but lately it’s been getting dull,” (which will tell you he’s looking for a way out) or “She’s great! She’s never jealous at all” (which will tell you that he wants you to be a secret supporting player in the movie starring them). It would be safest for your heart—and safest for the guild’s dynamic—for you to continue to play it cool. But if your feelings are so intense that this isn’t an option, then you’ll just have to be honest with him, and accept that once you’ve confessed, your fate (as a couple) will be in his hands. If he shoots you down, are you prepared to power through the awkwardness in order to stay in the group? I really hope so. These are your friends now. Don’t give them up without a fight! —Maggie

If you have a question for a future installment of Just Wondering, please send it to [email protected].