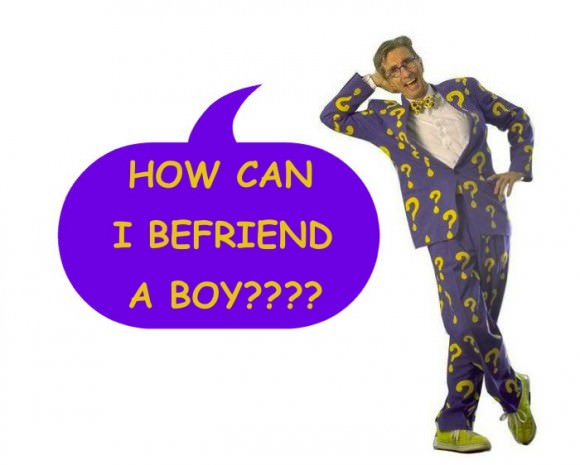 There’s this boy a couple grades younger than me who I talk to a little, and he’s really cool, and I want to be his friend. He has a girlfriend, and I seriously don’t have any romantic feelings towards him. My question is, how can you befriend a boy without making him think you have a crush on him? —Mary, 17

First off, kudos to you for understanding the difference between liking someone as a friend and liking them romantically. Some people don’t figure that out for years! You can like someone who would normally be in your dating pool and even find them attractive without wanting to fall in love with them. This kind of platonic love and affection can be a beautiful thing, and it only gets better the older you get.

It shouldn’t be a big deal that you want to become friends with this guy without any romantic intentions. It’s totally normal and even common for a guy and a girl to be friends with each other without any concerns of ulterior romantic motives. But as you clearly are aware, it can get weird sometimes.

My first piece of advice is to be honest with him. It takes a little bit of vulnerability, which is not always easy, but I find that being blunt and complimentary often works: “I like your ________ [taste in music, art style, podcast] and wanna be friends, and this is not me trying to date you, I swear.” Boom, simple as that. If that’s too forward for you, just chat him up, and when you do, mention whatever your current relationship status is—seeing someone, interested in someone, not dating—just to make him aware that you’re not fishing for his affections. Other than that, befriend him the same way you’d befriend any other dude or lady: hang out, exchange stories, laugh together, do dumb things together. I’ve found showing my guy friends what I consider my least sexually alluring traits—burping, ranting about reality shows, sweating—reinforces the notion that this relationship will stay unsexy. Paradoxically, however, forcing a feeling of platonicness just makes the other person think you’re interested in them. Imagine some guy talking you up every day and repeating over and over again that he doesn’t find you attractive at all, or inviting you to do stuff but always with the tagline “I mean, just as friends. NOT AS A DATE,” or shrinking away in horror at any casual physical contact. You’d think he was protesting too much. Don’t work to make your friendship seem super platonic, just let it be platonic. I’m guessing you don’t constantly announce to your female friends that you don’t want to make out with them, and that you sometimes lean on them or hug them or sit close together—if you act differently with this guy, it’s gonna feel weird to both of you.

You mentioned that he has a girlfriend, and whether or not you want to address that situation is up to you. You shouldn’t have to, but if you like, make an effort to be friendly with her. It just confirms that you’re not into him romantically, and hell, if you like a guy’s taste in a bunch of things, it may mean you’ll like his girlfriend too! (Note: you are not required to be friends with both members of a couple.) Just keep it nice and easy like you do with all your gal pals, and enjoy your new buddy! —Emily G.

One of my guy friends has started playing bass with a band that writes really sexist songs. All of their songs are about how stupid women are. I think it’s good for his confidence that he is getting out there and doing something he really enjoys, but he keeps asking me to come and see his band play, and to “like” them on Facebook. I don’t think my friend is sexist at all, but I am worried that if he carries on with this band he might start to believe some of the offensive stuff they sing about. I am confused about what to do: I want to support my friend, and I don’t want to hurt his feelings by refusing to see his band play, but I find their lyrics offensive. —Heather

I think one of the kindest things you can do is to tell your friend in a straightforward way why you are not interested in seeing his band. Even if he is super cool, he may not even be aware of how sexist their lyrics are—in part because young dudes are not usually conditioned to be aware of misogyny in culture. (This would explain why he feels OK inviting you to their shows.) Or maybe he knows the songs are sexist but he’s brushing it off because he thinks that’s the “rock & roll thing to do.” Who knows? It’s not really your business or your duty to interrogate and/or change his attitude toward the messages in his band’s songs. Your duty is that of a friend, and that is to be honest with him about your feelings. Tell him the truth: that you are happy he’s having fun in this band and you would like to be supportive, but you’re really bummed out by this band’s lyrics, that their music makes you uncomfortable and you can’t support it. Keep it simple and don’t apologize.

Sometimes the best thing we can do for people is let them see or feel the consequence of their actions. He is choosing to be in a sexist band, and you are choosing not to like it on Facebook. The thing about being in a band, or making any kind of art that is going to be presented in public, is that in order to continue doing it, people have to develop a second skin. Anyone creating art for the public has to learn how to handle criticism and failure, since those are more common in anyone’s career than praise and success. Not everyone is going to be a fan—that’s just how it goes. Hopefully your friend will take your opinion to heart, but also take it in stride and not let it affect your friendship. Maybe you could start a non-sexist band with him?! —Jessica

I’m going to prom with somebody I don’t like very much! Any pointers? He’s a good guy, it’s just…he likes me and I don’t like him (in that way). —Sarah, Canada

I was in your situation two proms in a row, with two very different outcomes. Here’s how they went down:

First there was Louis. I knew Louis was in love with me because he broadcasted it on LiveJournal. I didn’t take it too seriously. He was having a rough year (parents divorcing) and I think he just needed someone to crush on, to have something nice in his life—I was basically a safety crush. We went to junior prom together, and we had a really great time. He was gracious and goofy, and he never made me feel like I owed him romance just because it was prom night. We stayed friends, and he continued to rhapsodize about me on LiveJournal—until the summer when he got an actual girlfriend!

Then there was Zach. I knew Zach was in love with me just because it was just obvious. He asked me to senior prom, and I said yes, assuming he’d be cool about it like Louis was. (Spoiler: he wasn’t.) It was weird from the very start. He’d asked me the color of my dress (green) so he could get a matching corsage. But at the last minute I’d decided to wear a purple-and-black dress instead. When Zach showed up at my house he was visibly upset about this change, because now the corsage didn’t match (the horror!). That’s when I realized he was taking this way too seriously. He wanted this to be a “perfect night.” He wanted to tell our grandchildren about the magical prom when we realized we were soulmates. The rest of the night was super awkward, and I wished I’d never said yes.

So basically you need to ask yourself, are you in a Louis situation or a Zach situation? Are you a safety crush, or is this guy for real? If it’s the latter, well…you may be in for a looooong night. You might consider going stag instead (agreeing to go to prom with someone is not non-retractable—you can totally change your mind!). If you suspect he’s a Zach but you still want to go with him, maybe you could find a group for the two of you to hang with, so it won’t feel so date-y. And at some point, gesture towards all the cheesy couples and say something like “Look at these suckers. Most of them will have broken up by graduation and be embarrassed that this night ever happened. Aren’t you glad you and I were smart enough to come just as friends?” That should make the boundaries pretty clear without having to get too Dawson and Joey about it. Remember: it’s not your responsibility to give him the prom of his dreams! —Maggie

I have wanted to be a doctor for as long as I can remember. But recently I’ve been thinking about how terribly DIFFICULT it’s going to be. Medical school is hard enough, but the thought of neglecting other areas of my life terrifies me. What about friends and family? Relationships? I’m not going to have time for hobbies anymore, meaning no textiles projects or writing or spending hours on the internet! University is supposed to be the Time of My Life. I don’t know if I’m just being childish and fearing the Adult World of Work, or if I should instead pursue something easier and thus have free time for Life. I don’t want to become my career. What should I do? —Tyra

How great that you are asking yourself these important questions. Far too often people do not give their own sense of what it takes to be happy the importance it deserves when they’re thinking about what they want to do for a living.

I’ll tell you right up front that I’m a primary care doctor and I love my job. I’m excited to go to work every day. I wasn’t sure how typical I was, though, so I spoke with many of my colleagues to get a wider perspective. And almost everyone I talked to loved their job too—at least most of the time. Some shared your concerns about the time commitment we are forced to make. We’re all still figuring out the best way to make it all work.

Here are a few points we all agreed on:

Integrating life and work teaches you how to be efficient and how to decide where you have to be perfect and where you can just show up. It’s a skill you’ll need no matter what you do, if it’s something you love. —Lisa Sanders, M.D., assistant professor, Yale School of Medicine ♦

If you have a question for a future installment of Just Wondering, please send it to [email protected].