Literally the Best Thing Ever: The Lonely Doll 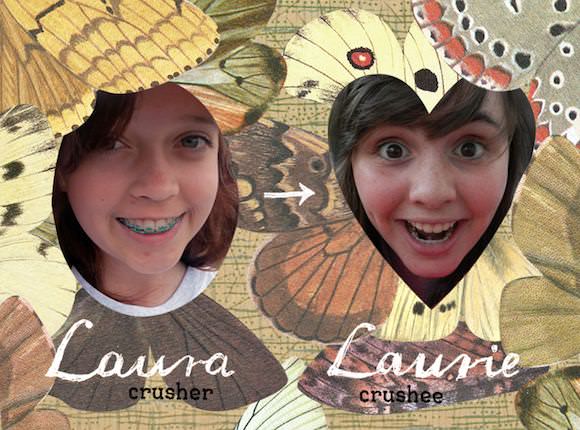 Laura, 16, is a high school sophomore living in Virginia. Laurie, 14, is an eighth-grader in Louisiana. They’ve never met in person, but they’re best friends, and they’ve been passing virtual notes to each other since last June.

The story of how I met my best friend is all thanks to the internet. I was having a bummer summer and decided to watch some good ol’ quality YouTube to make myself feel better, when I accidentally met Laurie in the comments section of a VlogBrothers video. Thousands of Tumblr and Facebook messages later, I feel closer to her than anyone I’ve met in real life.

I’d always felt like the friend who loved way too much. When I met Laurie, I saw it was possible for two friends to be equally crazy about each other. We talk every day now, and we have blogs dedicated to each other’s faces. The next step of our friendship: meeting in person in the location directly between us—a town in Georgia called Snellville. It has the slogan “Everybody’s Somebody in Snellville.” Doesn’t that sound like something out of a Dr. Seuss book?

ROOKIE: Tell me about your bummer summer.

LAURA [crusher]: I live kind of far away from everyone else in my town. None of my friends drove yet last year, so I didn’t have a way to go anywhere. I didn’t really do much.

I’m curious about what happened the day you and Laurie met online.

It was intense! She made a comment on a VlogBrothers video of John Green, and it got a bunch of thumbs-ups, so it was at the top of the page. She said she was happy to be a part of such a great community, and I replied that I was happy to be there with her. And we just kept the conversation going in the comments. Then we exchanged Tumblr URLs and started chatting on Facebook. It’s all history from there.

What made you like her so much in the beginning?

We were going through each other’s Tumblrs at first and seeing that we had a lot of the same interests, like art and different TV shows and bands like Bright Eyes and Fall Out Boy and Fun. We were each freaking out about how cool it was that the other one existed. I got to know her really, really quickly. The conversations were easier than most [offline] conversations I have.

We talked about how in other friendships, we were always the more excited person, but that we were equally excited about talking to each other. It was just kind of an instant bond of best-friendship. We chat every day through Facebook.

Now that you know each other better, what do you talk about?

How did she help?

I had a friend who was kind of a bully. Laurie told me not to listen to the things that person told me, which were upsetting me at the time, and she encouraged me to get out of the person’s target zone.

Do your other friends know about Laurie?

Not a lot of them. But her friends know about me. I talk to some of them online sometimes.

How do you think she would describe you?

She would probably say I’m nice, and that I understand things that other people can’t.

What’s the funniest thing she’s ever sent you?

One time she filmed herself dancing really hard to the Fall Out Boy song “Dance, Dance” to try to keep herself awake after being up for more than 30 hours. At a few points, I’m pretty sure she was channeling the “Thriller” music video, but she denies doing so consciously. One of our other good internet friends, Rosie, even made animated GIFs of it.

Laurie dancing to Fall Out Boy.

Weird videos of me lip-syncing to songs like “Teen Idle” by Marina and the Diamonds and “C’mon” by Panic! at the Disco and Fun. She said one of the times I made her laugh the most was when I sent her a video of me reciting the lyrics of “The Only Difference Between Martyrdom and Suicide is Press Coverage” by Panic! at The Disco like they were a poem, complete with coffee shop–esque finger snapping at the end.

Have you ever thought about what you’ll do when you meet?

I haven’t thought about what we’ll do, but I’ve thought about when we could meet. I’ll be getting my driver’s license soon, and I was thinking maybe the summer after senior year.

That’s a long time from now! It seems like it would be hard to have a best friend you’ve never met and who’s so far away.

Yeah. It’s kind of unfathomable to think of forming a bond with someone based mostly on text on a screen. All I know is that it’s very possible, and it feels very real. 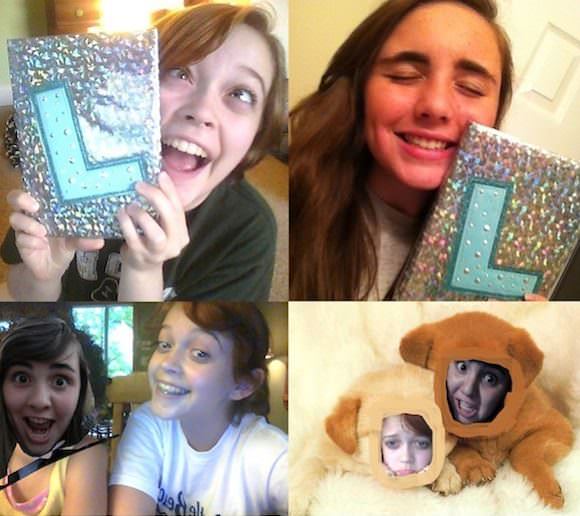 Top, left to right: Laura and Laurie with the L journal. Bottom: Photoshopped together, for the time being.

ROOKIE: A lot of people have acquaintances online that they’ve never met, but it seems kind of unusual that you and Laura became best friends. Why do you think that she—of all the other people you’ve chatted with and of all the people you know in real life—became your best friend?

LAURIE [crushee]: It was just fate or something. She was really easy to talk to, and she was always encouraging. We had a lot to say to each other.

What makes it easier to talk to her than, for instance, a friend you have at school?

I have time to think about what I want to say to her, and if I don’t have anything to say, I’ll just send her a key smash—like when you just put all your fingers on the keyboard and rapid-fire press things. I can a minute to formulate a response, and it’s OK. That helps a lot.

Are you guys chatting right now?

She’s messaging me, but I’m not messaging her back yet.

Could you describe Laura’s personality a little bit? She seemed sort of shy on the phone.

Yeah, she is really elusive. She says her friends in real life call her an enigma. I’ve actually never talked to her on the phone. We’ve tried to video chat a couple times but it didn’t turn out well, partly because we had connection problems, but also because she’s shy, I guess. But once she opens up, she doesn’t seem to have trouble talking about anything. She’s really compassionate. She’s always thinking of everybody else, before herself. And she’s really joyful. She’s just a cool person.

She told me you sent her a really cool birthday present.

One night we were shopping together online, and she mentioned that she liked this shirt. It was around her birthday, and it wasn’t expensive, so I got it for her. And I made her a painting of our faces together. And then I sent her a mix and the L journal, which she probably told you about.

No, she didn’t mention it!

Oh! Well, it’s a journal I bought when I was in the fourth grade. It has an L on it, and because both of our names start with L, we’re writing in it and sending it back and forth. We used to send letters all the time, but we sort of slowed down with it. The journal is bringing that back a little. It’s pretty cool.

If you chat online every day, how do you keep what you write a secret until the other person gets it?

If I write something in a letter, I’m not going to tell her about that. The letters feel more formal. It’s not like I write more formally—I still say the same things. It’s just the actual writing with a pencil and knowing she won’t see it for a few days that makes it feel different.

Does your friendship seem different from offline ones?

Sometimes it feels not as real, which isn’t a negative thing, but there aren’t consequences. I can just say some things without being scared of what her immediate reaction will be. I can confront her, and I can say really weird personal stuff. We do plan on meeting one day. And it feels like we’ve already met.

Have you talked about what you’re going to do when you hang out the first time?

We’ll probably just go out to eat and, like, hug a lot.

Does it make you nervous?

Yeah! It makes me super nervous. I’m scared it’ll be different or awkward. But I know, deep down, that it won’t. It’ll just be good.

What side of you is she seeing that friends in your town don’t know about?

I really tell her everything. We can explain every detail of our days, which you can’t do with a person who’s there all the time. And we’re interested in a lot of the same things. I can talk to her about Harry Potter, which none of my friends in real life care about at all. Also, this sounds dumb, but just the internet as a whole she understands more, I think—like the communities. Maybe because she’s older? Which isn’t a big deal for us, but it makes her different from my other friends. They think it’s weird that my best friend lives so far away from me, but it’s not weird to her. And Laura and I have a lot of little inside jokes. Most of them are just like, typos. We say okat instead of okay. And we talk almost exclusively in capslock. We started doing it because we were excited that we’d met, and it stayed. ♦

To nominate your own Friend Crush, send an email to [email protected] telling us what made her take up occupancy in your heart; and please include the following: (1) both of your names, (2) your ages, and (3) a big, clear picture of EACH of you. Thanks!