Literally the Best Thing Ever: The Cosby Show 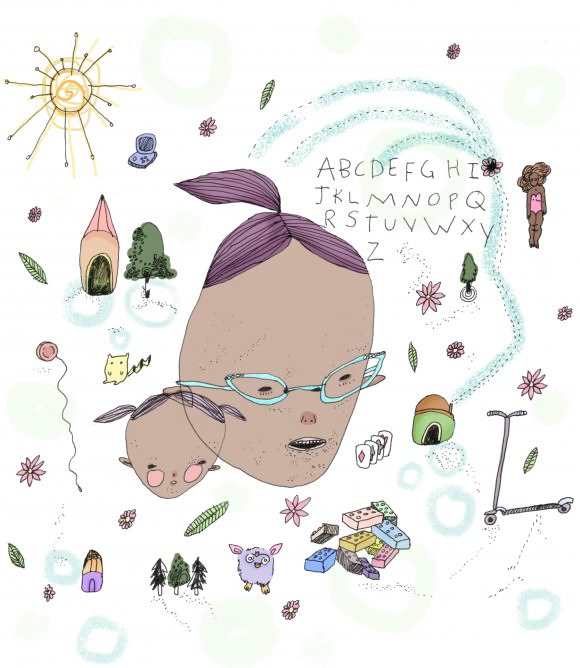 I remember the day my best friend in sixth grade got a fake, removable gold cap for her tooth, the better to emulate the rappers we loved at the time. I couldn’t believe her parents would buy it for her and let her wear it—it seemed so cool, so grown up. Plus, I knew she had to go into the city to get it, which added to its aura of sophisticated danger. I, meanwhile, was still watching cartoons on TV, and crocheting and knitting clothes for my dolls.

Soon I noticed that my friend was starting to hang out with different people, and that she wasn’t coming over as often after school to play kickball in my backyard. I now know that trying on new friends is just a natural part of growing up, but at the time I felt abandoned. Now that she was ready to be older, my friend was leaving me behind in Babyland. I felt like I was deficient in some way: abnormal, immature, childish.

By ninth grade most of the girls in my class had cast aside their Barbies and sticker books in favor of high heels and lots of makeup, which made me nervous. I wasn’t ready for that kind of self-sexualization—I would rather stay home and paint or watch E.T. for the hundredth time than go to a dance or hang out in the park to look at the cute boys I would see the next day in school anyway. There were a lot of things I looked forward to about being a teenager and then an adult—e.g., staying out as late as I wanted, eating ice cream any time of day or night—but I wasn’t ready to give up all the things I loved about being a kid.

And I was convinced I would have to give them up. You know how people say you should enjoy what you have now while you’re alive, because “you can’t take it with you” to the grave? That’s how I felt about the transition from childhood to adulthood: You had to leave your childish things behind. The dividing line between the two stages of life seemed solid and inflexible, and the passage through it strictly one-way—once you’d crossed it there was no turning back.

In my family, crossing that threshold meant taking on a whole list of new responsibilities. While as a kid I earned my mall money by sharing after-dinner dishwashing duties with my brother, once I became a teenager I’d have to do laundry for the entire family all by myself. I’d have to pay for more of my own stuff, too, which meant I’d have to get a job, and that wouldn’t really leave me any time for knitting or doodling or yet another E.T. screening. (Repeated viewings of that movie couldn’t have helped my fear of adulthood, now that I think back on it: The grown-ups in it are uniformly horrible, and the children get to ride around on flying bicycles.)

Here’s another thing: Growing up, I never saw any of the adults in my life having fun. They all seemed super serious all the time, and super tired—I assumed it was from working all day at jobs they didn’t seem to like very much and then coming home to houses and apartments that needed to be maintained, which would have been more than enough, but I didn’t even factor in the time they spent raising and tending to me and carting me around to all of my million after-school activities. But no matter what the reasons, the image they gave me of grown-up life was dire, stressed out, exhausted, and bleak. I was terrified of growing up and becoming like them, and losing all of the simple joys of youth; but I was also afraid being left behind and missing out on all of the pleasures and freedoms that the adult world had in store. And I got stuck there, with this impossible choice.

Then came “Todd Time.” I’ve written here before about my love of the designer Todd Oldham, who ignited in me a lifelong love of making clothes (I even studied fashion design in college, hoping to become him one day). I first saw him on the first iteration of House of Style on MTV in the early ’90s. He had his own segment (the aforementioned “Todd Time”) in which he would teach viewers how to dye our hair cherry red with Kool-Aid, for instance, or how to score at a thrift store. On the episode I happened upon, he was reupholstering a chair from the flea market using some cheery fabric, a glue gun, and some safety pins. This blew my mind. I loved the flea market! I loved making new stuff out of old stuff! And this guy—this Grown Man—was doing this for a living? It was so cool to see an adult with a job they didn’t hate—a job that in fact involved doing the very things that I loved—and he was obviously having fun while he did it. Believe it or not, this was the first hint I got that adulthood didn’t mark the end of fun forever.

After that revelation, I started paying closer attention to the adults around me, and I noticed that they didn’t all look like the responsibilities of life and work had put them through the ringer. Some of them, like my eighth grade art teacher (who was basically Joni Mitchell), had jobs that they seemed to enjoy. It began to dawn on me that there was more than one way to be an adult, and that not all of them involved giving up your childhood hobbies. It turned out that there wasn’t actually a hard line between childhood and adulthood; you can hold on to the parts of being a child that nourish and comfort you, that make you feel like yourself and help you become the person you want to be.

Suddenly adulthood didn’t seem so scary anymore. I got a job, bought a car, went away to college, dropped out, dropped back in, and eventually became an Official Old, with a job and a spouse and a house and everything. But I never stopped doing the things I liked, and many of those “childish” hobbies turned into skills that have been invaluable in my adult life. I still do all that crafty stuff, and all that time spent noodling around by myself while the other kids were sweating it out at school dances taught me how to be happy being alone, which so many people don’t know how to do and which has been incredibly useful to me. I now see all of my grade-school interests and proclivities, which were so often dismissed as “childish” by my classmates, as my way of staying connected to the part of me that can still feel wonder, and that’s willing to be entertained by simple things that make me happy—thechildlike part of me.

Here’s the difference between childish and childlike: Childish behavior in anyone who isn’t an actual child is obnoxious. It’s ramming your cart into random objects at Target for no reason; it’s throwing a temper tantrum when you don’t get your way; it’s refusing to apologize when you’ve made a mistake. Being childlike, on the other hand, is immersing yourself in something just because you love doing it. It’s being open to liking things that aren’t “cool,” without pretense or explanation, because they make you happy. It’s the ability to be curious and interested without worrying what anyone else might think. It’s pretty badass, when you think about it.

So many of you send us variations of the question “How do I figure out what I’m passionate about?” Well, you should know that you’re already doing some of the greatest things! A lot of the stuff you like now could end up being a source of lifelong joy for you, and it’s important to keep things in your life just because they make you happy—not everything has to contribute to a career decision or larger life plan. High school is stressful enough as it is, you know? In fact, being childlike is especially important when you’re a teenager—a period when you’re changing constantly, and sometimes confusingly, and are meanwhile being barraged by messages about what is acceptable and what is cool and how you should act/look/be—because it will keep you connected to some truth about yourself. It allows you to ignore everyone else’s input so you can figure out what you want for yourself. And it’s easy enough to do: Just tap into what it felt like to be a little kid with a free afternoon. Five-year-olds don’t worry that it’s “juvenile” or “uncool” to play in the sprinklers in their underwear or stare out the window for a while making weird sounds with their mouths or spend an entire hour just coloring. This is why no five-year-old ever says they need help figuring out what they’re passionate about.

So what if it makes you happy to play with Legos long past the recommended ages on the box, or have sleepovers until you graduate from high school (or beyond)? Or maybe you just really love making tiny movies, or getting together with your friends to be goofy. Don’t feel like you have to give that stuff up, hunker down, and get serious about your future. You’re not just doing something you love, you’re learning how to give yourself permission to revel in life a little bit. If you make a habit of this, it can lead to your becoming the kind of person who knows what she wants, too, and who pursues it without apology or compromise—and there is truly no better kind of adult to be. ♦