Friday Playlist: Stuck in the Suburbs 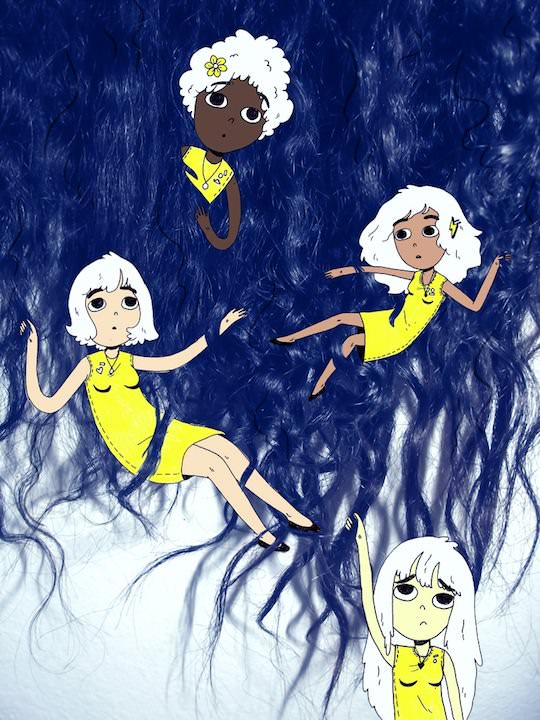 Growing up, I had a head of thick, curly hair that my classmates envied. I was often asked about my parents’ race, the implication being that if I had “good” hair, I must be part white. At the time I didn’t realize how racist and hurtful this distinction between “good” and “bad” hair is; I just felt lucky to have a head of voluminous curls. My white single mother made every effort to learn how to style my biracial hair, and each morning she used handfuls of conditioner and detangling spray to tame my mane as she brushed it. I was super self-conscious about my body, but my hair was one thing I could be proud of.

As my hair grew longer, I had some difficulty managing it. By middle school, it cascaded down my back, and because of its density, my mother and I decided I should use a relaxer, which I applied every couple of months to loosen the curls. This definitely helped me with my transition into boarding school as a freshman, when I no longer had my mom to help me style my hair every the morning.

It wasn’t until college that I had my first hair meltdown. During one super traumatizing semester, as I was dealing with a horrible breakup and a health scare, all that stress caused a lot of my hair to fall out. Naturally, I freaked. My hair was the one thing I wasn’t insecure about, and now it was half-gone. I got healthier a few months later, but unfortunately my hair did not—it would never return to its previous abundance. I could no longer just wash it, throw in some curl-defining product, and head out the door. It looked frizzy and sparse. I decided the best thing to do was to get rid of the chemically processed hair altogether, so I cut it into a fauxhawk. This helped for a while, but I wanted longer hair again, so I let it grow and made it through that awkward in-between stage by experimenting with extensions and wigs. I started looking for blogs by other women of color and reading about their styling tips and nightly routines. I tried twist-outs and flexi-rods, but no matter how much I practiced, my hair never looked as great as the theirs.

So I took the experts’ advice for curly hair: I used sulfate-free shampoo, followed by a leave-in conditioner or hair cream, and then left my hair to dry without touching it. (Playing with your hair while it dries, according to stylists, messes up the curl pattern and creates frizz.) The result was limp hair; my curls were well-defined, but they looked more like ramen noodles than the rock & roll fros I admired.

Around this time, I was cast as a style expert for a new show on MTV. The executives of the show really wanted me on camera with my natural hair, so they sent me to an upscale salon that specialized in curly hair. The salon was great, but as I predicted, they went with the technique that I think works better for girls with thicker hair: after washing and conditioning, they slathered my hair in a curl-defining cream, scrunched it a few times while wet, and used a diffuser—without laying their hands on my hair till it dried. In the end, my curls were beautiful, but still limp. There was no way I’d be caught dead on TV like this.

The day we taped the pilot, I hopped in the shower and washed and conditioned my hair with what I had on hand: Herbal Essences Color Me Happy shampoo and conditioner. It was a random discovery—I think my sister used it, and I loved the way it smells, so I bought some. It turns out it works great on my hair (though it isn’t organic and contains sulfates, which some people prefer to avoid). When I got out, I used their Totally Twisted mousse and threw my head back and forth while scrunching. The hair-toss is something that I’d done growing up to help dry it, but now that my hair was thinner, I found that the more I did this, the more volume it created. So while the other hosts were getting their makeup done, I was in the greenroom, just tossing my head back and forth to make it bigger. At one point, the makeup artist had to stop me, because she said it looked great. And you know what? I agreed. The TV show didn’t end up going anywhere, but I was grateful for the experience, because I learned how to handle my hair.

I’ve since learned that getting a great haircut also helps. Going to a good salon can be pricey, but finding the right shape makes a big difference when it comes to managing curls. Between my cut and my newly perfected scrunching-and-flipping technique, I finally love my curls again. For those of you who struggle with thin and curly hair, I made a video tutorial of my process that I hope helps. Sometimes it’s a process of trial and error, so don’t be discouraged if it takes some experimenting to figure out what works for you!