The Teachers’ Lounge: What Is the Deal With That Place Anyway? 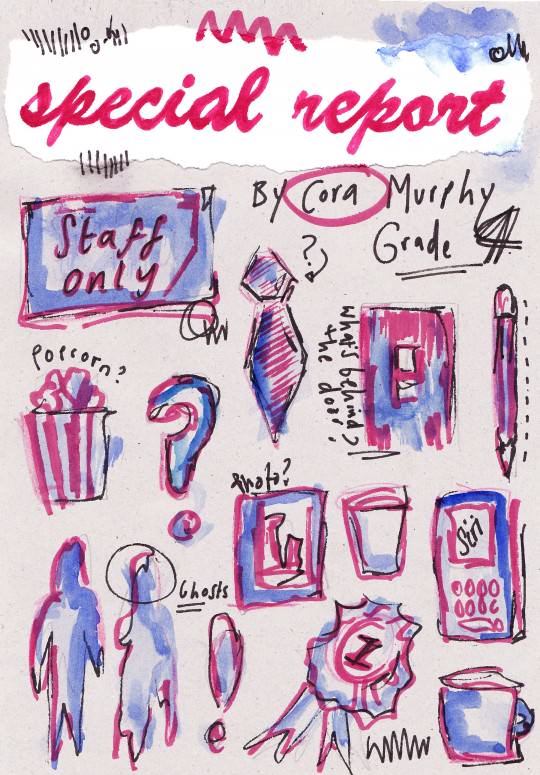 The Franklin Focus
News for Students, by Students (with help from Cameron Parker’s dad, who owns the Copy Cabana on Sycamore Ave. Mention The Focus and receive a 10% discount today!)

The Teacher’s Lounge: What Is the Deal With That Place Anyway?

As an investigative reporter, it is my job to get to the bottom of every story by locating sources, asking questions, and putting all of the pieces together in order to make sense of things. To put it another way: investigative reporting is like solving a jigsaw puzzle. (That is called a simile. We are learning about those in Mrs. Kaplan’s class right now.) (Shout-out to Mrs. Kaplan, I accept extra credit whenever it is offered.)

One of the things Mrs. Kaplan taught us about investigative reporting is that some of the most interesting stories are right under your nose. While walking to the cafeteria last week, I kept my eyes open for a potential lead, and found it in the main hallway, third door on the right: the door marked Teacher’s Lounge: Staff Only. I realized that I had passed this door, and whatever was behind it, a bazillion times since starting at Franklin Elementary, and not once did I ever stop to think of what might go on in there. So, you guys: What is the deal with the Teacher’s Lounge?

In order to uncover the truth, I interviewed the following sources:

Miss Gimley: second grade teacher
Mr. Caruthers: fifth grade teacher
Milo Brooks: a fourth grade boy who is my friend but not my boyfriend
Cindy “Empress Luna” Beam: a seventh grade girl who lives next door and scares my parents with her makeup
Siri: a know-it-all robot who lives on my dad’s phone

I asked each one a set of hard-hitting questions; here were their answers:

What is the purpose of the Teacher’s Lounge?

Miss Gimley: Oh, Cora. It’s pretty self-explanatory, don’t you think? It’s just a place for teachers to relax when they have a minute. You might say it’s where we go to have recess!
Cindy “Empress Luna” Beam: I’ll give you one piece of advice: don’t bother asking the teachers. They’ll just give you some boring answer about how it’s a “place to relax” or some garbage. It’s like, who are they kidding? I mean, think about it! Even at Hogwarts the professors were like, “Oh shoot, forgot to tell you about the GIANT KILLER SNAKE in the basement.”
Mr. Caruthers: Oh, it’s just a big party zone in there, every day. It’s where we all pool our million dollar salaries to buy each other bricks of gold and snazzy ties like the one I’m wearing today. You don’t get this kind of cotton-polyester quality just anywhere, you know. Did Mrs. Kaplan teach your class about sarcasm yet? This is sarcasm. I bought this tie at Marshall’s.
Siri: I’m sorry, I cannot find “Washington purple’s office T-shirt loud.” Do you want me to search for results on the internet?

Why doesn’t the door to the Teacher’s Lounge have a window like all the other doors in school?

Milo Brooks: Because they need at least one room where they don’t have to see your dumb face. BURNNNNNN
Empress Luna: When I was at Franklin, I heard there was a secret passageway that led from the closet in the Teacher’s Lounge to a hidden movie theater—with popcorn and the works—that some rich retired teacher had donated to the staff, and they all go down there and hang out during lunch periods. That’s why it always smells like popcorn in the main lobby after 11 AM.
Mr. Caruthers: Oh, that’s completely true. We also have a skating rink, private jets, and a day spa. It would be ridiculous if the smell of popcorn were coming from, say, a microwave that was built during the Reagan administration and has the gunk of 30 thousand Lean Cuisines built up inside it, right? The movie theater explanation is much more plausible.
Miss Gimley: It’s just for privacy, the same way that the bathroom doors don’t have windows. It’s a place for quiet, private time. It’s honestly quite boring in there, Cora. Just a couch, a coffeemaker, and a microwave that Mr. Caruthers burns his popcorn in on a regular basis.
Siri: I found four door companies close to your location. Would you like me to list them for you?

Why wasn’t I allowed to entert Teacher’s Lounge for this investigation?

Mr. Caruthers: Because we were afraid you’d take pictures of our spaceships and sell them to the National Enquirer. Oh no, I’ve said too much! They’ll take all my gold away now! How will I ever afford that diamond-encrusted frozen pizza I was hoping to snag at the Stop & Shop on my way home?
Miss Gimley: Because we have a strict policy that no students are allowed in the lounge during school hours. If we let you in, we’d have to let everyone in, and due to space restrictions, that’s just not possible. And also because Mr. Caruthers tends to use inappropriate language whenever the microwave burns his popcorn.
Empress Luna:They’re probably hiding like, a robot or an alien in there. I mean, someone has to work the concession stand at the secret movie theater.
Milo: Uh, because they don’t want it to smell like mint-vanilla or whatever it is that you smell like all the time? Not that I notice or care about how you smell. Is this on the record still? It is? Then you stink, that’s what I meant to say. Boy, do you stink.
Siri: Getting directions to “Forest Investment Station.”

Is there any truth to the rumor that the Teacher’s Lounge is haunted?

Miss Gimley: Absolutely not.
Empress Luna: Of COURSE.
Milo: All right. I’m sorry about what I said about your face. And you don’t stink. Are you going to print this? If you print this I’ll die of embarrassment and will haunt the lounge myself. And then I guess I’ll tell you what it looks like.
Siri: I don’t understand. I don’t understand. I don’t understand. [Ed. note: I may have called Siri “a butt” at this point in time.] Do you talk to your mother with a mouth like that? [Mom note: She most certainly does not, and she will think about it while she does the dishes every day next week.]
Mr. Caruthers: I’m pretty sure a vortex to the Underworld opens up every time Mr. Beam decides to bring in one of his guitars from the music room in for a one-man “jam session.” I know you’re reading this, Beam! Some of us just want to eat our popcorn without having to hear all about “Phish’s deep cuts,” all right?

May I at least have a photograph of the Teacher’s Lounge?

Miss Gimley: But isn’t it more fun to use your imagination? It’s such a lovely gift, and you should embrace it! Besides, I think the reality would disappoint you. As I said earlier, it’s just a boring old room.
Empress Luna: Oh right, they’ll give you a picture. Probably on the same day that I put Gerard Way in a time machine, make him 20 years younger, and have him proclaim his eternal love for me. Keep dreaming, kid.
Milo: I snuck a peek for you as the door was closing the other day. The only thing I saw was a microwave that looked like one of those computers from 50 years ago. I couldn’t see anything else. I tried though. Then Mr. Caruthers yelled at me for running in the hallway and made me stay after and hang up fliers for that dumb dance they’re having on Friday. Like anyone wants to go to that! You don’t want to go to that, do you? Is this still on the record?
Siri: [Ed. note: Siri was taken away from me after the “butt” incident, so she had no opinion on this subject.]
Mr. Caruthers: Here’s a mental picture for you: it’s a room with a lot of people in it who care about you, who want you to do well, and who work very hard to help you succeed. It has a couch and a microwave and a coffeemaker and in the corner there are shards of a guitar that used to belong to Mr. Beam. It’s a tiny cafeteria where we sit and eat and talk and get ready to go back to the classroom. And all of it is maintained by Alpha-8, the robot we stole from Mars during one of our billionaire space missions. Any other questions?

Is the Teacher’s Lounge the best place in school?

Data Analysis: In my expert opinion, it appears that the Teacher’s Lounge is, most likely, a boring room where teachers go to hang out. However, I have also tested the water fountain on the second floor near Mrs. Myrick’s class, and can confirm that Empress Luna is telling the truth about that, so I am still open to the alternate theories she presented, including the underground movie theater. When asked about his “jam sessions,” Mr. Beam said something about certain people not “digging” his “grooves” and walked away. Milo Brooks asked me to delete all of his comments from this report but I said no because I am a reporter first and a dance partner second. I hope he understands. Also, according to my mom, Mr. Caruthers really does buy his ties at Marshall’s. She has seen him there more than once. Taco Bell has not returned the tweet I sent them (“hey @tacobell do you have a store on the roof of my school?”) so I can’t confirm or deny that claim, either.

When I asked Siri for information on the Alpha-8 robot from Mars, she said the following: “ALERT. ALERT. OPERATION LUNAR LOUNGE HAS BEEN COMPROMISED. ALL SYSTEMS SET TO SELF-DESTRUCT IN FIVE MINUTES.” And then my dad’s phone kind of melted a little, so he’s mad now, because I broke it, I guess.

Conclusion: The Teacher’s Lounge will remain a mystery unless one of us becomes a teacher and gets the inside story. Until then, we’ll all have to be vigilant. Keep your eyes open for robots, your noses sniffing for underground popcorn, and your eyes on the sky for any sign of rooftop tacos. Together we can crack this case. (Or at least we can crack our parents’ phones by accident. Sorry, Dad.)