When your whole world is flat, empty, and directionless, the options for fun are pretty limited. 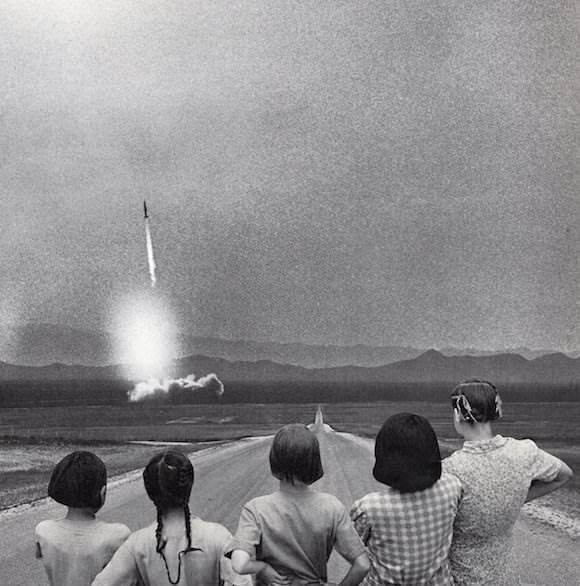 The first thing you realize when you open your eyes in Cheyenne, Wyoming, is that it is flat. In all directions. It is panoramically, 360-degrees flat. Houses dot the landscape, and the sky is pierced with the occasional yellow arches or the red Pizza Hut font or the party sombrero on the Taco John’s sign. But it’s still so flat that you feel like you’re looking out at the ends of the earth. The horizon merges with the plains the same way the sky bleeds into the ocean, and so the feeling is that of being on an island, in complete isolation. Landlocked. If you never left Cheyenne, you could grow up feeling like nowhere else existed.

I grew up there. Like many small towns, it was a fine place to spend a childhood. Most everyone I knew had a backyard to play in, and there was minimal crime and decent public schools. I spent many of my days at my grandma’s house, playing in her garden with any number of my more than 50 first and second cousins, and when the sun would set she would call us inside, where warm tortillas and chili verde waited on the table. When I was little, everyone in town seemed to have a smile on their face and a good word to say about their neighbors.

But then I hit adolescence and opened my eyes—figuratively, this time—to the fact that I was living in a remote place in the least populated state in America, and there was a huge world beyond its borders. I became incredibly restless and depressed. I longed to live in a more sophisticated city like Oakland, California, where my mom had taken me to visit my aunt, or my true dream destination, New York City, which I idealized after watching Party Girl. I started to feel like there was nothing intellectually stimulating for me in Cheyenne. I didn’t want to be there, but more important, Cheyenne didn’t want me there either. It was one of those small towns that try to pretend teenagers don’t exist. Unless you were involved in organized sports, which I wasn’t, there was very little for young people to do. No rec center, no “cool teen hang-out spot” (if those aren’t mythical everywhere). Beyond the mall and the movie theater, and infrequent trips to Denver to see bands play, the whole scene was deadsville. Young local bands put on shows at the VFW occasionally, but those were few and far between—though my friends and I looked forward to them more than we did our birthdays.

We had to make our own fun. Of course, when your whole world is flat, empty, and directionless, the options for “making your own fun” are limited. Like many of our peers, we experimented with alcohol, weed, and sex—stealing away illicit moments made our lives slightly more interesting, and it made us feel connected to other teens across the country in cities much more glamorous than ours. But mostly, we drove around aimlessly. And sometimes we went to the silos.

If Cheyenne’s defining quality is its flatness, its secondary feature is that deep in the country, its tumbleweed-smattered plains—yes, there are actual tumbleweeds there—are peppered with abandoned military silos. We knew about a few of them, the ones where high school kids had gone to hang out for years. They are huge concrete structures with two walls that form an L shape—remnants of the Cold War under the purview of the nearby F.E. Warren Air Force Base. Inside are gargantuan steel girders, two round strips of bolted metal that are aimed heavenward and emptied of their bounty: missiles designed to deliver nuclear weapons. (The Warren AFB “can neither confirm nor deny” that such missiles were once housed there.) The statues on one side of the entry to the base were exact-size replicas of Peacekeeper missiles, the favored weaponry of the Reagan administration, and this was just 10 miles from the house I grew up in. In the ’80s, my sadistic older cousin used to tell me that if the Soviets ever decided to attack they’d hit Cheyenne first, just to make me cry.

But in my teen years, in the ’90s, long after most of the weapons had been reportedly carted away, I was not scared, but curious. The silos were our version of an urban myth, passed down from a previous generation of high schoolers: Did you know you can party where the bombs were? If one of us managed to finagle car keys from our parents for the night, we’d drive out into the horizon, past the city streetlights into the pitch black, seeking those silos in the dark, armed only with vague directions we’d obtained from older sisters and brothers and, occasionally, someone in the car who’d been there before. It felt like we were trying to get off the island.

My high school friends and I bonded over Sonic Youth, feminism, and our mutual desire to leave Wyoming as soon as possible. We’d dream about what it would be like anywhere else while scribbling poetry and chain-smoking over bottomless cups of coffee in shit diner chains. Going to the silos, we wanted to see if the inky darkness would somehow transport us to another place. But we were also seeking out our own narrative, trying to figure out how being from this odd, sparse part of the country connected us to the rest of the world. We’d drive north past the paved thoroughfares and the strip malls, then east out onto Four Mile Road, and make a left after two miles, where the streets became gravel. Then we’d slow down to a few miles per hour with the high-beams on, past the ranches, where horses and cows grazed on the dry grass like they had for centuries, until we reached the closest silo—the one we visited most often.

We’d walk up the short hill from our cars to a flat concrete platform (I can’t remember if there was a sign warning us not to trespass). Once there, we wouldn’t do much. We’d sit around and gossip about who was pregnant, who was doing a fanzine, and who had scored weed from their parents. We’d maybe spray-paint the concrete walls with hearts or our names—Marie, Steven, Julianne—immortalizing ourselves alongside 10 years of seniors before us. Sometimes a kid would have a six-pack of Coors and we would split it among eight people. Out there, surrounded by cows and grass and buffalo—yes, buffalo—the only indication that humans had ever found Cheyenne was the silo itself. The silos didn’t have roofs, so you could climb onto the lowest part of the girder, just a few feet up, and look at the stars, imagining what had been here before. If the moon was waning we’d be enveloped in darkness and we’d tell stories about the Cheyenne and Arapaho tribes, who once hunted bison on these very plains. We’d imagine the homesteaders who had made their way into the American West in the 1850s, building one-room houses and setting up ranches, some of which still existed. There was always some sort of ghost story, usually tied to a young pioneer woman who’d gotten lost in the harsh blur of winter and whose spirit wandered the lands to this day, crying out for her family. We’d scare ourselves with that story, told in the pitch black, the only light coming from the tip of a cigarette or joint.

I think we also felt sad. We related to that girl, lost in the dark, wishing only to find her place. There at night, we couldn’t see past our own hands, and a girl in a blizzard would have seen less. It felt like an apt metaphor, all of us blind and feeling our way, inch by inch. This whole country holds strange secrets and lost souls, and out there it was like we could feel all of them. The history of this land had led to us here inside this silo, where it was so quiet and dark that we could hear the ghosts moving endlessly around us.

There was an incident or two, like the time my older, drunken boyfriend fell into a hole in the concrete and we had to help him out using a blanket as a rope. (I broke up with him shortly thereafter; his physical resemblance to Kurt Cobain no longer made up for his Cobain-like proclivities.) Then there was the time I backed my car up at the wrong angle and slammed into the Firestone twins’ flashy red Fiat, and we all agreed to lie and say it happened in a friend’s driveway so our parents wouldn’t find out where we’d been. But my memories of those nights are mostly quiet. If we stared into the galaxy long enough, we could lose ourselves, merge with the land and the sky. We’d stay until midnight, when we had to return to make our curfew.

Eventually, my best friend and I moved to New York City, where the streets are radioactive in the way I always wished for. The plains claimed most of my classmates. Many are still in Cheyenne, with kids and houses and husbands. Some of them died—drugs or suicide—and I imagine them with the silo spirits, wandering the ranches on the outskirts of town, looking for a home that will accept them.

We did normal teenage things back then—renting Sleepaway Camp or Sid & Nancy, eating pizza, pretending to do homework—but the silo trips defined me in a way I only understand now. I processed vastness there. I saw something beautiful but also not quite right. ♦