Words I got oh so wrong.

A mondegreen is a phrase or line from a song that has been misheard, often hilariously (and occasionally profoundly). The word was coined in 1954, when the writer Sylvia Wright described, in an essay for Harper’s, how she’d bungled this 17th century Scottish ballad called “The Bonny Earl O’Moray.” The last line is “And laid him on the green”; as a child Wright had thought it was “And Lady Mondegreen.”

The first time I heard Destiny’s Child’s single “Jumpin’ Jumpin’” on the radio in high school, I swore the chorus was “The club is full of ballers and their COCK is full grown,” and I thought DA-YUM, that is SEXUAL. (It was actually “their pockets” that were grown.) Maybe misheard lyrics are a little portal into our psyches, revealing that reveal the limits of what we know and what we are capable of imagining. When I was little, not knowing what a casbah was, I thought Joe Strummer was singing, “Rock the Casper” (as in the Friendly Ghost). As an adult, after being spurned by a lover, I heard John Lennon singing, “Oh, you’re cold!” but a week later, after my boyfriend and I made up, it suddenly dawned on me that he was saying “Oh! Yoko!” In some cases, there are no “correct” lyrics, and it’s all just glossolalia and mumbling and our brains have to make tremendous leaps of imagination. Here are a few of my favorite songs to mishear. The internet makes it easy to correct oneself, but I’m quite happy singing my versions (which you can enjoy and poke fun at; just scroll down to the bottom of this post). Post your favorite misheard song lyrics in the comments? 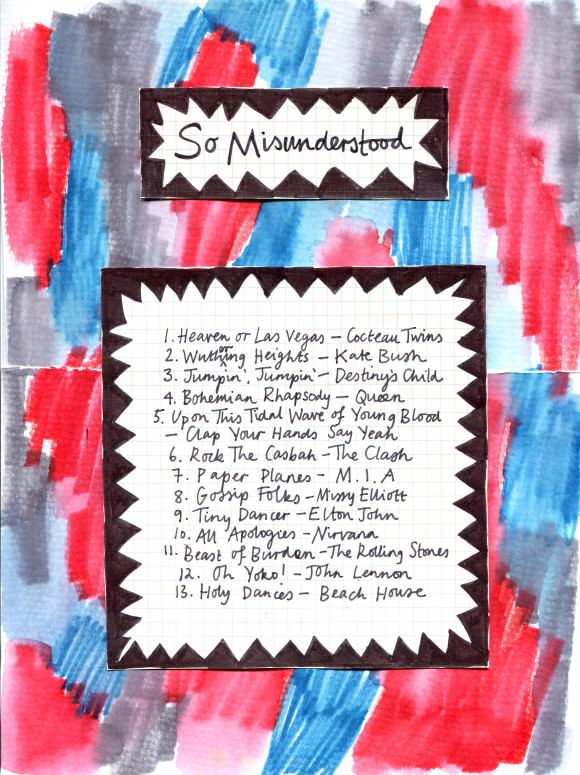 The chin is the cheek to my soul

Out on the wiley, windy moors
We’d roll and fall in green

The club is full of ballers
And they pockets full grown

The hells of poop have a devil put aside for meee

Beelzebub has a devil put aside for me

5. “Upon this Tidal Wave of Young Blood”

Cherry don’t like it
Rock the Casper
Rock the cashbox

All I know is Rosario

All in all is all we are

Real lyrics:
I’ll never be your beast of burden

Maybe you
Don’t know what you’ve got,
Spent yer money on desert lots
Holy dances and acronyms
For her. ♦