My sisters are at once a mystery and everything I need to know. 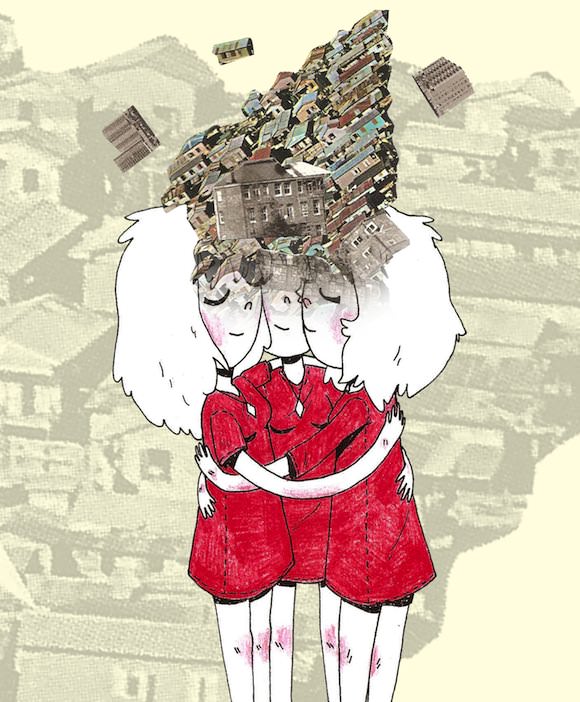 I have two sisters: Laura and Madeline. Anytime any one of us talks to our dad on the phone, we’ll be called some variation on “Laur-Am-Mad-Am-Laur…,” because he can never keep track of which one of us he has on the line. This is probably the only time we’re ever mistaken for one another, and I don’t think it even really counts, since it’s more a product of my dad’s having followed the Grateful Dead around when he was a teenager than it is a reflection of any similarities among his three daughters.

Although we were born within three years of one another, my sisters and I couldn’t be more different. Maddy, the youngest, is a super-fit gym enthusiast; one of her recent aspirations in life is to model, possibly for Maxim (“It’s way classier than Playboy,” she says). She could do it, too: she looks so immaculate that on any given day you’d think she’d stepped off the pages of any panting, XY-chromosomed publication you can name. After modeling gets boring, Maddy would ideally like to be a stay-at-home mom, raising a little set of siblings of her very own while her husband, whoever he is, works to support them (aka my literal nightmare life). Meanwhile she keeps busy in part by maintaining the greatest Twitter account of all time. It mostly comprises lists of her likes and dislikes, which will probably come in handy later in life when she has to recount them Q&A-style next to underwear shots in a magazine–she hates players, but loooooves chocolate! What I’m trying to say is that my little sister is clearly exactly like your girl here (a person who literally fell face first onto a moving treadmill during her one excursion to the gym and who also thinks players are just the absolute tops).

Our older sister, Laura, is probably the most adventurous of of the three of us. She’s always wanted to live on the West Coast, so just this month she up and moved out of our mom’s New Jersey home and across the country to California, with no job and no idea if her boyfriend was going to join her. She just jumped into her Jeep Wrangler one day and drove 3,000 miles with her cat, Olive, on her lap, and now she lives next to the beach and routinely goes on challenging, scenic hikes. (I, meanwhile, sometimes order delivery twice a day so that I don’t have to leave my bedroom for longer than a minute. I know, I’m pretty much a fearless pioneer, but I put my pants on one leg at a time just like everybody else. [This is a metaphor, I’m too lazy to bother with actual pants–like, ew, zippers? No thanks].) Lately, Laura’s also gotten really into aerial silks and hanging out with Burners and, both of which make me cringe on a whole-body level. The other day she sent me and Maddy a video of herself twirling glow-in-the-dark balls on leashes around her body, which is apparently some raver thing. (I try not to ask too many questions.)

In telling you all the ways Maddy and Laura are very, very different from me, I’ve also told you some of the main things I find delightful and interesting about them. I am obsessed with them. When someone who doesn’t know them asks me what they’re like, I pull out my iPhone so I can show off pictures of them beaming at my mom’s wedding or pulling faces on a hotel balcony while on vacation with our dad. I gush, I brag, I won’t shut up about how honored I feel to be related to them. It’s kind of intense.

Laura and Maddy seem to maintain a similar mix of mystification and appreciation for my own, let’s say, idiosyncrasies, and for that I am eternally grateful. If you asked them what I’m like, they might tell you how disproportionately defensive and hurt I get when I think they’re making fun of me–which, of course, they often were when we were younger. (I once left a restaurant crying inconsolably after a prank involving a pat of butter and the business end of my Diet Coke.) Nowadays, as adults, they’re more inclined to indulge my sensitivity than they are to capitalize on it for laughs, thank god.

Our pride in one another feels more parental than sororal, which is strange considering that we’re pretty much as close in age as you can be to a full sibling without being a twin. If I had to guess why, I’d say I think it might be because we grew up in what some guidance counselors grimly called an “unstable home environment.” Until we were teenagers, our parents were addicted to the kinds of substances that can make it hard enough to focus your eyes on one spot for longer than three seconds, let alone pay attention to raising your kids, so my sisters and I had to pay attention to one another, and to everything else. When my dad split and my mom started crying for long stretches out of seemingly nowhere, it was Laura who somehow knew that it was in part because she (and, by extension, we) had become dangerously poor, and filled me and Maddy in on this information by gently telling us that we shouldn’t ask our mom to buy us frivolous things anymore. Laura has always seemed to intuit the root causes of emotional situations like that, even when she was really small.

One thing Laura and I have in common is that from time to time we struggle with self-doubt. Then again, who doesn’t? I’ll tell you who: Maddy. Since she was a toddler, Maddy has always been completely self-assured and resolute in her convictions—even when our home life was disjointed and fairly torturous, she never allowed circumstance to sway her belief in herself. She had a lot of trouble with anger back then and was easily upset, but never seemed to direct that rage at herself, unlike Laura and me. Maddy was the most outwardly angry at our parents; she never hesitated to call my mom out for her drinking, and never played nice with our parents’ significant others if she didn’t like them. She showed me what it’s like to be uncompromising in your trust of your own version of the truth (which is maybe part of why I’m able to write this story about her and Laura today).

Lacking proper adult supervision, Laura, Maddy, and I raised one another. We were like wild animals who managed to become women together. None of us could have done that alone, but we learned early to lean on one another, to draw on our sisters’ strengths to bolster our own weaknesses. I have learned so much from my sisters. Laura taught me how to be funny and how to shred through life adventurously and without hesitation in order to pursue the most happiness available to you. Absorbing Maddy in all of her ironclad confidence taught me that as long as you at least pretend to know that you’re right, people will believe you. I don’t think I’ve ever seen her seem insecure about anything in her entire life. (Maxim better watch out for her, if it’s what she really wants for herself. And if it is, I’ll frame every picture and hang them proudly in my house because I love her and will support her until my heart stops, even though I’m not exactly crazy about the magazine on the whole. That’s what it’s like to really love a sister, I think.)

Loving someone means, among so many things, learning how little matters of opinion and taste really matter in the long run.I might not ever understand Maddy’s predilections for incredibly dark bronzer or flavored vodka, but I know what her face looks like when she’s at her very bravest. When I think about how Laura brought home a spread of Cheetos and candy and plastic bottles of Coke that she had stolen from the supermarket so I could have a nice 12th birthday, I’m like, who fucking cares if she’s into glow sticks or whatever?

Laura and Madeline were the country in which I grew up, a place familiar only to us three. Whenever we’re together now, we quiz one another on that country’s micro-history: “Remember when Maddy used to drape a blanket across her back and march around the backyard insisting she was the president?” “Remember when we had to put Rocko up for adoption and we took pictures hugging his neck outside of the shelter?” “Remember when the police shined flashlights through the glass door to the backyard and we had to keep the lights off?” We are the only people on earth who know the answers to any of those questions and the meanings behind those answers, and in some inexplicable, nationalistic way that makes me feel proud and strong and vicious in my love for them.

This past Christmas, we all cried hard at separate moments, but for the same general reason. We had started the day at my mom and her husband’s house, then visited my dad, his wife, and our one-year-old brother, Charlie, and finished the evening with more relatives at my paternal grandparents’ home. Everyone in our immediate family is healthy now, and involved in a life they at least 75% profoundly like, and so we had a beautiful and love-stuffed holiday. Maddy was the best at explaining our tears: “Think about what it was like for us a couple years ago. This is insane and unbelievable.” Yes, that was right. That is what Laura and I were feeling too. We had made it through the wilderness of our childhoods together and were now, finally, adult women getting to create a new kind of memory together: an unambiguously happy one.

There’s some wisdom in our dad’s amalgamation of our three names. We are “Laur-Am-Mad-Am-Laur,” one entity that mixes our three personalities to become greater than the sum of us. Alone, we don’t always make sense to one another, but we fit together in a way that I understand on a cellular level. Laura and Madeline Spiegel are not only their own wonderful women, but also living proof of my first self. They’re the human evidence that corroborates the story of the life that I had before I was an adult living away from my family, enjoying unrestrained freedom to choose the people that I love and want to have near me. But you know what? I still pick my sisters over everyone, every time. The way they know me, and I them, is more honest, profound, hard-earned, fulfilling, and beautiful than any other relationship I’ve had. Though there are aspects of my sisters that will always be mysterious to me, that fact is perfectly clear. ♦